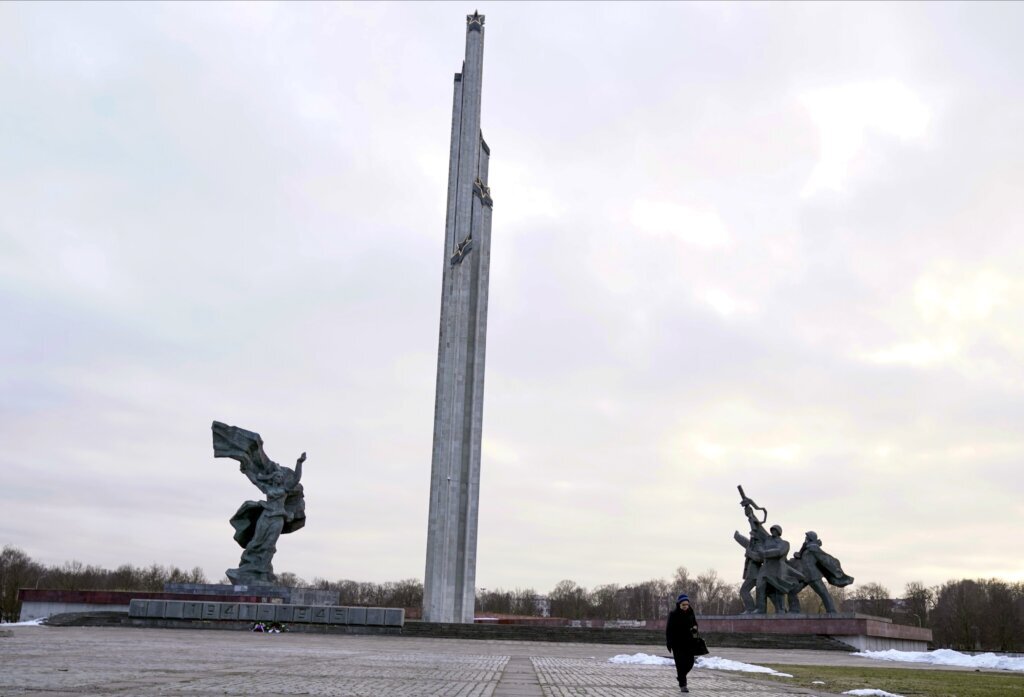 COPENHAGEN, Denmark (AP) — A concrete obelisk topped by Soviet stars that was the centerpiece of a monument commemorating the…

COPENHAGEN, Denmark (AP) — A concrete obelisk topped by Soviet stars that was the centerpiece of a monument commemorating the Red Army’s victory over Nazi Germany was taken down Thursday in Latvia’s capital — the latest in a series of Soviet monuments brought down after Russia’s invasion of Ukraine.

Heavy machinery was spotted behind a green privacy fence at the foot of the nearly 80-meter (260-foot) obelisk shortly before it was felled. The column, which had stood like a high-rise in downtown Riga, crashed into a nearby pond, causing a huge splash at Victory Park.

A Latvian media outlet broadcast the event live as onlookers, some with Latvian flags wrapped around their shoulders, cheered and applauded.

The obelisk, made up of five spires with three Soviet stars at the top, stood between two groups of statues — a band of three Red Army soldiers and on the other side a woman representing the “Motherland” with her arms held high.

The monument was built in 1985 while Latvia was still part of the Soviet Union. It has stirred controversy since Latvia regained independence in 1991 and eventually became a NATO and European Union member.

On Twitter, Latvia’s foreign minister said by taking down the monument, Latvia was “closing another painful page of the history and looking for better future.”

The country shares a 214-kilometer (133-mile) border with Russia and has a large ethnic Russian population. On Russia’s annual Victory Day, which commemorates the Soviet victory over Germany in World War II, people gathered in front of the Riga monument to lay flowers.

Latvia’s parliament voted to approve the demolition of the Victory Park monument in May, and the Riga City Council followed suit. Work to clear away the monument started three days ago with the removal of statues. The area was then cordoned off and authorities issued a flight ban for drones. Police temporarily closed traffic near the park on Thursday, citing security reasons.

Russia’s invasion of Ukraine in late February has prompted authorities in several eastern European countries to remove symbols from their communist eras.

The government in Poland — another country once was part of the Soviet sphere — said Thursday that a memorial site in neighboring Belarus containing the graves of Polish soldiers who died during World War II is being leveled to the ground by the Belarusian authorities.

Lukasz Jasina, a Foreign Ministry spokesman, said on Twitter that the cemetery in Surkonty, where Poland’s resistance battled Soviet forces, is being “devastated by the services of the Minsk regime.”

The development comes a day after Poland said it was demolishing a monument to Soviet Red Army soldiers in Poland, one of dozens that have been marked for destruction.

Belarus has been a key ally to Moscow while Poland, which lies on Ukraine’s western border, has been supportive of Ukraine.

Last week , Estonia removed a Soviet World War II monument from near a city on the Russian border as part of a wider effort to dismantle Soviet-era symbols. The tank replica was sent to a war museum north of Tallinn.

In 2007, the relocation of a World War II monument of a Red Army soldier in Estonia’s capital, Tallinn, sparked days of rioting.

___ Vanessa Gera in Warsaw, Poland, contributed to this report.