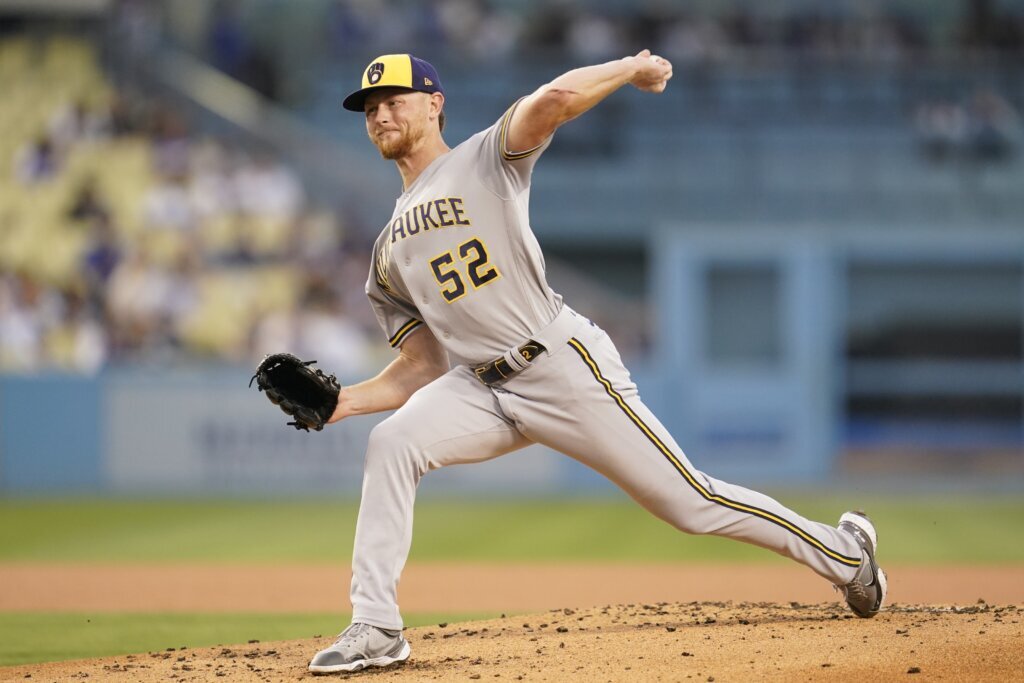 The Dodgers, with the best record in baseball and the highest-scoring team in the majors, had their nine-game home winning streak snapped. Los Angeles was blanked for the sixth time overall this season after completing a weekend sweep of Miami with 19 runs and 34 hits in a three-game series.

Lauer (9-5) allowed five hits in five innings. He struck out two and walked two in avenging a 2-1 loss to the Dodgers in Milwaukee last week.

The Brewers bullpen allowed three hits the rest of the way.

Milwaukee left fielder Christian Yelich threw out Justin Turner at the plate to finish the second inning. Cody Bellinger flied out to the warning track to end the game.

Luis Urías snapped an 0-for-21 slump with a home run in the fourth inning. He entered as a defensive replacement at third base in the third.

His solo drive came with two outs off Julio Urías (13-7). The two players are not related. The left-handed Urías gave up two hits in six innings, struck out seven and walked one.

The Brewers scored three times in the ninth off Phil Bickford.

Willy Adames led off with a dink shot over the head of third baseman Max Muncy that he stretched into a double. Yelich followed with a RBI double to deep left-center.

Yelich took third on Hunter Renfroe’s flyout and scored standing up on Luis Urías’ sacrifice fly to right. Keston Hiura added 13th homer, a drive into the left-field pavilion for a 4-0 lead.

Yelich got two hits after being moved to the third spot in the order, which snapped a streak of 58 consecutive starts in the leadoff position.

The Dodgers had their chances but couldn’t convert.

Smith singled off Matt Bush with one out in the eighth to put the potential tying run on base. But Justin Turner grounded into an inning-ending double play.

The Dodgers had the potential tying run at second base in the seventh. Cody Bellinger singled and took second Mookie Betts’ groundout. But Trea Turner took a called third strike to quash the threat.

The Dodgers loaded the bases with two outs in the fourth. Justin Turner and Muncy singled back-to-back and Chris Taylor walked. But Lauer got out of the jam when he induced Gavin Lux’s flyout to left to end the inning.

Brewers: LHP Aaron Ashby (left shoulder inflammation) went on the 15-day IL and will miss his scheduled start Wednesday. He returned to Milwaukee to see a doctor. … 3B Mike Brosseau left the game in the bottom of the third with right rib cage discomfort.

Dodgers: LHP Clayton Kershaw (back) threw nearly 30 pitches in a three-inning simulated game. “He looked sharp,” manager Dave Roberts said. Kershaw will throw a four-inning sim game in Miami on Saturday. If all goes well, he could be activated for the next turn through the rotation after that. … RHP Blake Treinen (shoulder) is on track to be activated Sept. 2. … RHP Brusdar Graterol came off the IL, where he’d been since July 11 with right shoulder inflammation. He made four rehab appearances at Triple-A Oklahoma City, allowing one hit in 3 2/3 innings with four strikeouts.

Chris Taylor raced to chase down Omar Narváez’s fly ball in foul territory in the fifth. Taylor ran into the low wall in left field, hitting it at waist level and falling face first while holding onto the ball for the third out.

Dodgers: RHP Tony Gonsolin (15-1, 2.12) has the majors’ lowest ERA. He tossed seven scoreless innings against the Brewers on the road last week.