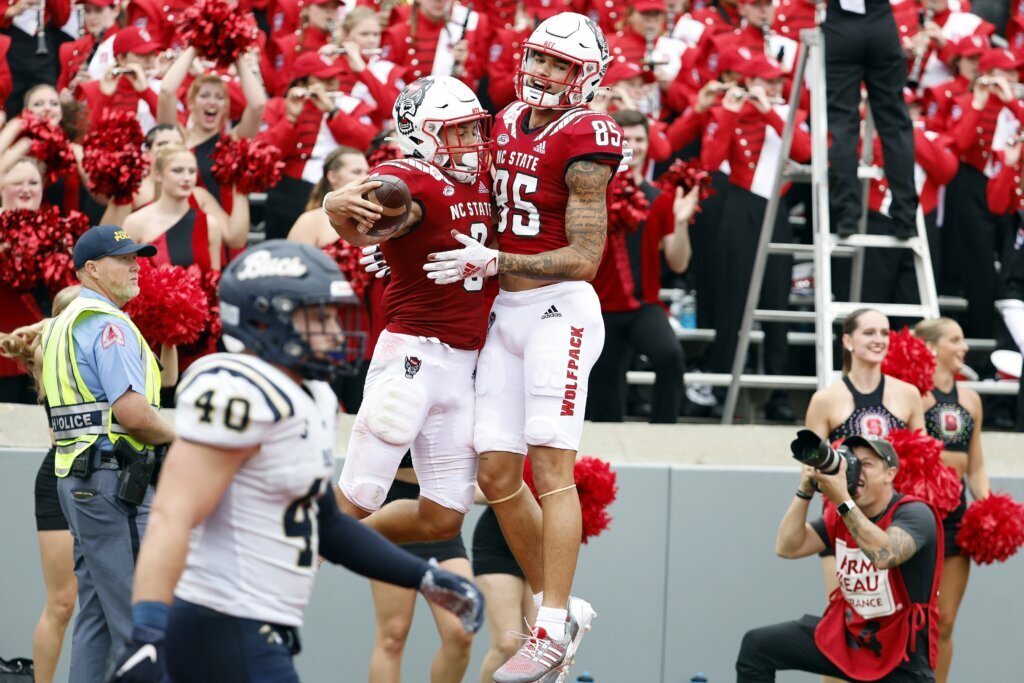 Leary threw four TD passes, including a perfect 24-yard wheel route to Jordan Houston down the left side and then a 40-yard strike over the middle to Anthony Smith after he shrugged blitzer Nick Perry off his back. Leary’s two rushing scores included a 12-yard keeper in the first quarter, when the preseason Atlantic Coast Conference player of the year bounced off three hard hits before hitting the end zone for the game’s first TD.

Celebrating his 23rd birthday, Leary wrapped up his day by hitting Chris Toudle for a 27-yard TD down the middle and a 45-0 lead with 12:48 left in the third.

The game offered N.C. State (2-0) a chance to regroup from last week’s 21-20 win at East Carolina, with the Wolfpack carrying a No. 13 ranking in the AP Top 25 to Greenville and taking the victory when the Pirates missed two critical late kicks. That game was full of problems after halftime, including coming up scoreless on two drives with a combined six goal-line snaps as well as sputtering to 25 fourth-quarter yards.

That made recent days, along with kickoff against the Buccaneers (0-2) of the Championship Subdivision, a chance to clean up mistakes.

“It’s nice to have a low-stress day,” Wolfpack coach Dave Doeren said. “Proud of our guys, I thought we got a lot better in a lot of areas.”

Charleston Southern’s top highlight was a 48-yard field goal from Sam Babbush midway through the third quarter to break up the Wolfpack’s shutout bid. Ross Malmgren threw for 111 yards but found himself under repeated pressure. Charleston Southern managed 36 yards rushing on 15 carries to remain winless all-time against Bowl Subdivision teams.

“What I feel we should’ve done a better job, what we wanted to do a better job of was just competing,” Charleston Southern coach Autry Denson said. “You know when you play a game like this that you have to play perfect, and that’s just to give yourself a chance because from a personnel standpoint, you just don’t match up. We just didn’t do that.”

Charleston Southern: The Buccaneers opened the season by surrendering 52 points at home against Western Carolina. And the Big South Conference program entered this one with an 0-25 mark against Bowl Subdivision opponents, including 0-15 against teams from the Power Five conferences. They never threatened to change that Saturday, either.

N.C. State: The storylines focused on improvements the Wolfpack could make after the ECU escape, not whether Doeren’s squad would beat a lower-division opponent. Leary and his teammates largely showed that, with the offense cracking the 40-point mark on its first snap after halftime and the defensive front generally overwhelming the Bucs.

The close call at ECU cost the Wolfpack five spots in the AP Top 25 poll. This is unlikely to have a notable impact.

N.C. State: Texas Tech visits the Wolfpack next Saturday in an ACC-Big 12 matchup.