The Formula One driver, 37, was confirmed as the latest investor on Tuesday.

He linked up with the Walton-Penner Family Ownership Group.

They bought the three-time Super Bowl winners for a US sports franchise record £3.81billion in June.

Hamilton, who has been a major campaigner in the battle against racism and climate change, posted a photo of his dog Roscoe in Broncos gear and revealed his joy at the new venture – and hopes he can be a trailblazer once again.

He tweeted: “Excited to join an incredible group of owners and become part of the @Broncos story!! 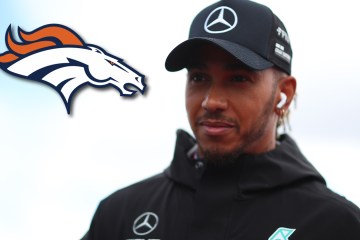 “Honoured to work with a world-class team and serve as an example of the value of more diverse leadership across all sports.

“Roscoe already thinks he made the team.”

Rob Walton, heir to the Walmart billions, is “delighted” to have Hamilton on board.

He said: “Lewis is a champion competitor who knows what it takes to lead a winning team and a fierce advocate for global equality, including in his own sport.

“With over 100 race wins, he is considered the most successful F1 driver of all time.

“His resilient spirit and standard of excellence will be an asset to the ownership group and the Broncos organisation.”

Hamilton is already a huge lover of that part of America, owning an amazing mansion in the Colorado mountains.

His decision to join the Broncos comes after he formed part of Sir Martin Broughton’s failed bid to buy Chelsea earlier this year.

Elsehwere, he already has a team in the all-electric Extreme E championship, which kicked off in 2021 as well as a clothing line with Tommy Hilfiger and a vegan restaurant.

On the track, Hamilton’s fortunes this season have turned around.

After a horror start and major problems with his Mercedes car, the seven-time world champ has finished on the podium in the last five races going into the summer break.

That included coming second in Hungary on Sunday despite starting seventh on the grid.

He is now sixth on 146 points in the drivers’ championship – 112 behind leader and reigning champion Max Verstappen.