LEWIS HAMILTON says “It’s nice to know how he feels about me”, after Fernando Alonso branded the Brit an “idiot” following a collision at the Belgium Grand Prix on Sunday.

The Mercedes ace, 37, was forced to retire after he made contact with the Spanish icon in the first lap at Spa.

Raging over the team radio, Alonso fumed: “What an idiot!

“Closing the door from the outside. I mean, we had a mega start.

“But this guy only knows how to drive and start in first.” 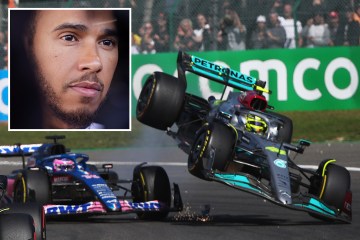 And Hamilton has hit back at Alonso, saying “It’s nice to know how he feels about me”.

Hamilton said on Alonso’s “idiot” comment: “I don’t really have a response to it.

“I know how things feel in the heat of the moment, but it’s nice to know how he feels about me.

“It’s better that it’s out in the open how he feels. And like I said, it wasn’t intentional, and I take responsibility for it.

“That’s what adults do.”

Hamilton says he’s grateful the crash wasn’t any worse and that he’s “alive and in shape”.

He continued: “I remember looking at the ground, it was definitely high up.

“I’m grateful to be still alive and in shape.

“I could hear something’s broken in the gearbox. Coming down I would have broken so much in the back end, so I was told to stop.

“But obviously in that moment, you’re hopeful you can keep going.”

Forest brings in Renan Lodi from Atlético as signing No. 18