LIONEL MESSI has seemingly confirmed he is staying at Paris Saint-Germain… by appearing in the club’s kit announcement for the new season.

The 35-year-old has been linked with a shock transfer return to Barcelona after just one season in the French capital.

But now Messi has appeared to have quashed any rumours regarding his future.

The Argentinian joined the likes of Kylian Mbappe, Marquinhos and Marco Verratti, as well as women’s stars Sakina Karchaoui and Grace Geyoro, for the club’s 2022-23 official home kit release.

Even Neymar appeared in the promo video for the brand new strip.

That’s despite the 30-year-old being strongly linked with a move away from PSG. 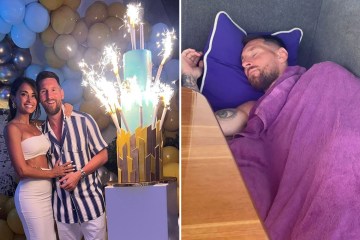 Reports suggest Les Parisiens have even told Neymar he is not wanted and is free to leave amid interest from Chelsea and Manchester United.

But the superstar forward still showed off his dance moves and grabbed the PSG badge as he showed off the new kit.

The home strip for next season is mainly a navy blue colour, with a white and red stripe down the middle, plus the club crest in the centre of the shirt.

Fans though appear to be divided on the new design.

Commenting on PSG’s Instagram reveal, one said: “Worst kit ever.”

While another simply wrote: “Trash.”

However, there was also a lot of positive reaction as plenty of supporters replied with fire emojis to show their approval.

Messi will even have the word “GOAT” brandished across his arm when he wears the kit.

But that’s not in relation to his status among some on the planet as the greatest footballer of all time.

No decision taken by GST Council on extending compensation to states

Italian surgeon gets his sentence appealed in Sweden case