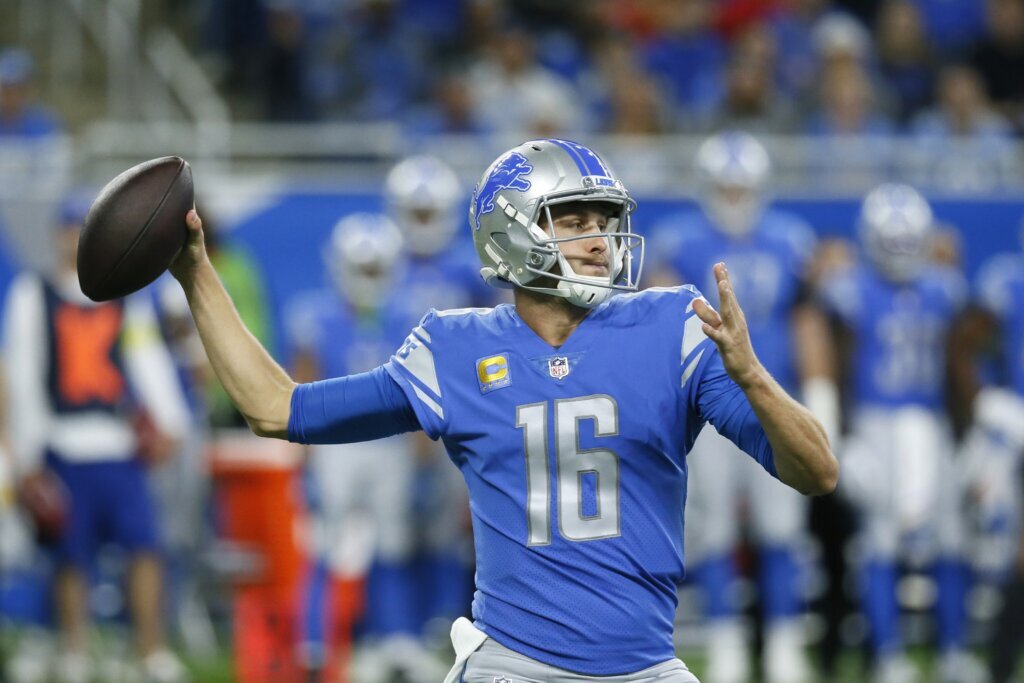 OPENING LINE: Patriots by 3 1/2, according to FanDuel SportsBook.

TURNOVER DIFFERENTIAL: Lions minus-1; Patriots minus-3.

LIONS PLAYER TO WATCH: DE Aidan Hutchinson, the No. 2 pick overall, had all three of his sacks in the first half in the Week 2 win over Washington. He is averaging three tackles per game and has been credited with six quarterback hurries. Detroit’s dismal defense needs him to become a difference-maker sooner than later.

PATRIOTS PLAYER TO WATCH: CB Jack Jones. The fourth-round pick made the most of extra playing time last week with Jalen Mills nursing a hamstring injury, hauling in a 40-yard interception return for a touchdown against the Packers. He also had a forced fumble and recovery. With Mills possibly returning to the outside this week, look for Jones to be utilized more in the slot.

KEY MATCHUP: Lions receivers vs. Patriots secondary. This will be the second top-five passing offense New England has faced this season. The other, the Dolphins, had 242 passing yards in the season opener. The Patriots also are coming off allowing a season-high 244 yards to Aaron Rodgers in last week’s loss.

SERIES NOTES: The Patriots have won four of the past five meetings. … The Lions’ 26-10 home win in 2018 snapped a streak of four straight Patriots’ victories and was Matt Patricia’s first as a head coach after he left New England for that job. Patricia was fired during the 2020 season and is back with the Patriots coaching the offensive line and serving as the play-caller on offense. … Dan Campbell went 1-1 against the Patriots in 2015 while serving as Miami’s interim coach. Bill Belichick is 4-4 against Detroit. … The Lions are 2-4 on the road against the Patriots. New England is 4-2 at home against Detroit, including 2-0 in Gillette Stadium.

STATS AND STUFF: Detroit is the first team in NFL history to score and give up a combined 281 points through the first four games of a season. … The Lions are the 30th team in the Super Bowl era to score at least 140 points in their first four games. … Lions QB Jared Goff has thrown 11 TDs, tied for No. 1 in the NFL with Patrick Mahomes and Lamar Jackson. … Goff passed for 378 yards, four TDs and had a pick-6 last week. … Detroit RB Jamaal Williams leads the league with six rushing TDs. … Williams, carrying a heavier load with Swift out with injuries, ran 19 times for 108 yards and scored twice. … Williams is the first player in the league to run for more than one TD in three of his first four games since LaDainian Tomlinson in 2005, and is the first Lion to have multiple scores on the ground in three games of a season since Barry Sanders in 1997. … TE T.J. Hockenson had eight catches and set career highs with 179 yards receiving and two TDs, becoming the go-to target with St. Brown and Chark out with injuries. … Hockenson set a franchise record for yards receiving by a tight end, breaking Jim Gibbons’ mark set in 1964. … LB Malcolm Rodriguez, a sixth-round pick, leads all rookies with five tackles at or behind the line of scrimmage. … Lions S Ifeatu Melifonwu, a third-round pick last year, is from South Grafton, Mass., and grew up rooting for the Patriots. … New England is wearing throwback uniforms based on the ones worn from 1984-1992. They feature a red jersey, white pants and “Pat Patriot” logo with white facemasks. The Patriots are 9-3 in throwback uniforms. … The Patriots rank 10th in the NFL with 29 big plays (10-plus yards rushing or 20-plus yards passing). … Mac Jones has 15 TDs (14 pass, 1 rush) vs. seven INTs with a 100.9 passer rating in his past eight home starts. … Hoyer passed for 302 yards and two TDs in his only career start against the Lions while with the Bears in 2016. … Rookie QB Bailey Zappe could make his first career start. His 25-yard TD pass against Green Bay last week was a first by a rookie this season. … WR DeVante Parker had his first TD catch of the season last week. … LB Matt Judon is 1 of 3 players in the NFL (Nick Bosa, Rashan Gary) with a sack in each of the first four weeks of the season. He had a sack in his only career game against the Lions while playing for Baltimore in 2017. S Devin McCourty had seven tackles last week.

FANTASY TIP: Patriots RB Damien Harris rushed for season-high 86 yards and a TD in Week 4. He is looking for his fourth game in a row with a rushing TD. He has 80 or more scrimmage yards in two of his past three games.

Swiss, Serbia go head-to-head to reach World Cup round of 16