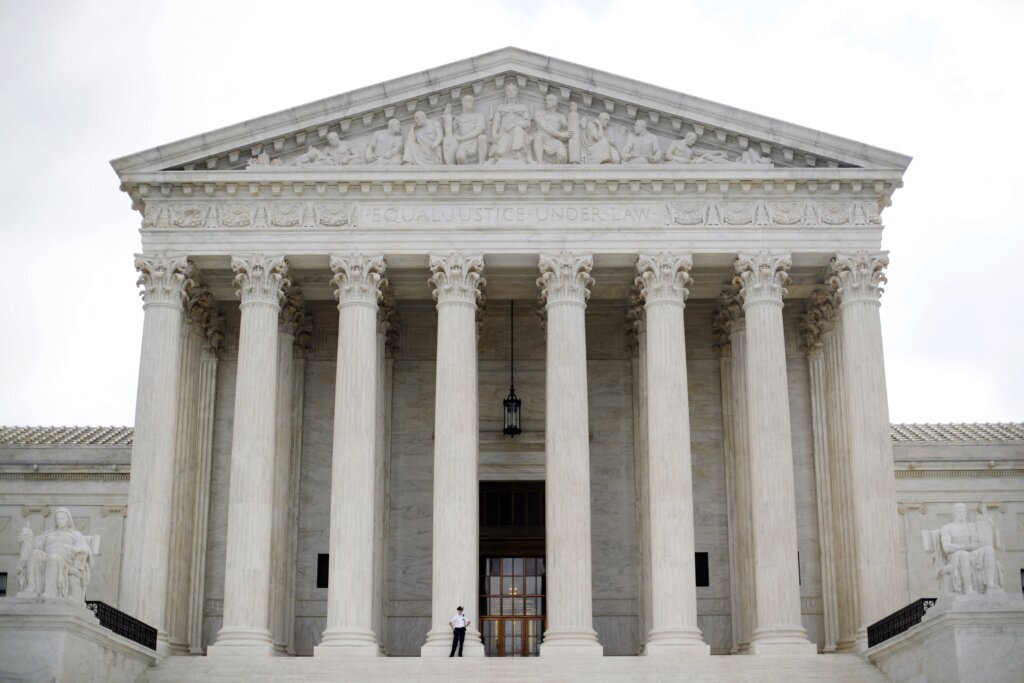 The Latest on the Supreme Court ruling on New York’s gun law: NEW YORK — In the wake of the…

The Latest on the Supreme Court ruling on New York’s gun law:

NEW YORK — In the wake of the Supreme Court ruling Thursday, at least one advocacy group urged lawmakers to avoid passing regulations that continue to make it too hard for members of Black and brown communities to own guns.

“New York’s gun licensing regulations have been arbitrarily and discriminatorily applied, disproportionately ensnaring the people we represent, the majority of whom are from communities of color, in the criminal legal system,” the Legal Aid Society said in a statement released by the nonprofit’s spokesperson Redmond Haskins.

The group recognized the ruling as “an affirmative step toward ending arbitrary licensing standards that have inhibited lawful Black and Brown gun ownership in New York,” stating that criminalization of gun ownership by people of color “has never prevented violence and serves only to further marginalize and incarcerate people from BIPOC communities.”

MORE ON THE DECISION:

He predicted it “will unleash even more gun violence on American communities.”

Blumenthal said the ruling will put more guns in public spaces instead of “upholding commonsense safeguards to reduce gun violence” This, he said in the tweet, will “open the floodgates to invalidate sensible gun safety laws in more states.”

ANNAPOLIS, Md. — Maryland Attorney General Brian Frosh, a Democrat, said his office will examine Thursday’s ruling to determine its impact on Maryland and “continue to fight to protect the safety of Marylanders.

In the statement, Frosh contends people carrying firearms in public places is a dangerous thing to have become the norm.

“The epidemic of gun violence sweeping our nation demonstrates daily the folly of introducing more guns into this boiling cauldron,” he said.

In a statement, the president said the ruling “contradicts both common sense and the Constitution, and should deeply trouble us all.” He added that after mass shootings across the U.S., the country should be doing more, not less, to rein in firearm availability.

“I call on Americans across the country to make their voices heard on gun safety. Lives are on the line,” he added.

He stated the ruling puts New Yorkers “at further risk of gun violence.”

Adams said the city has and will continue efforts to mitigate risks of gun violence in the city, including reviews of defining license application processes and “sensitive locations” where guns are banned.

“We will work together to mitigate the risks this decision will create once it is implemented, as we cannot allow New York to become the Wild West,” the statement said.

“This decision may have opened an additional river feeding the sea of gun violence, but we will do everything we can to dam it,” he added.

“I see the court headed in that direction,” he said. “It’s taking a stricter interpretation that the Second Amendment is absolute — it says what it says, you have a right to bear arms.”

Craven, an attorney and chair of the state’s House Judiciary Committee, questioned whether the court will now use that same thought process for cases about banning military-style weapons.

For concealed carry permits, New York’s requirements are more onerous than Rhode Island’s are. Craven said he represented the city of East Providence, Rhode Island in three cases where permit denials were challenged in the past decade, and the city prevailed in all three at the state Supreme Court.

Craven said he’ll read the opinion in the New York case to determine whether or not it creates a concern that Rhode Island’s requirements could be challenged, and whether that can be remedied by state legislation.

“Our nation is in the middle of a gun violence epidemic and instead of working to protect our communities, this court has made it even easier for potentially dangerous people to carry concealed handguns in public spaces,” the Democrat said.

NEW YORK — Thursday’s Supreme Court ruling that struck down a New York gun law requiring people to demonstrate a particular need for carrying a gun in order to get a license to carry one in public has no immediate impact on other laws, including rules on background checks and age requirements for gun purchases.

That’s according to Alex McCourt, the director of legal research for the Center for Gun Violence Solutions at Johns Hopkins Bloomberg School of Public Health.

McCourt said that instead, courts will reevaluate the laws, determining whether they violate the Second Amendment.

“It’s possible that these laws will face a new challenge, and that’s particularly true for any laws governing the public use of guns which was not previously considered part of the Second Amendment,” McCourt said.