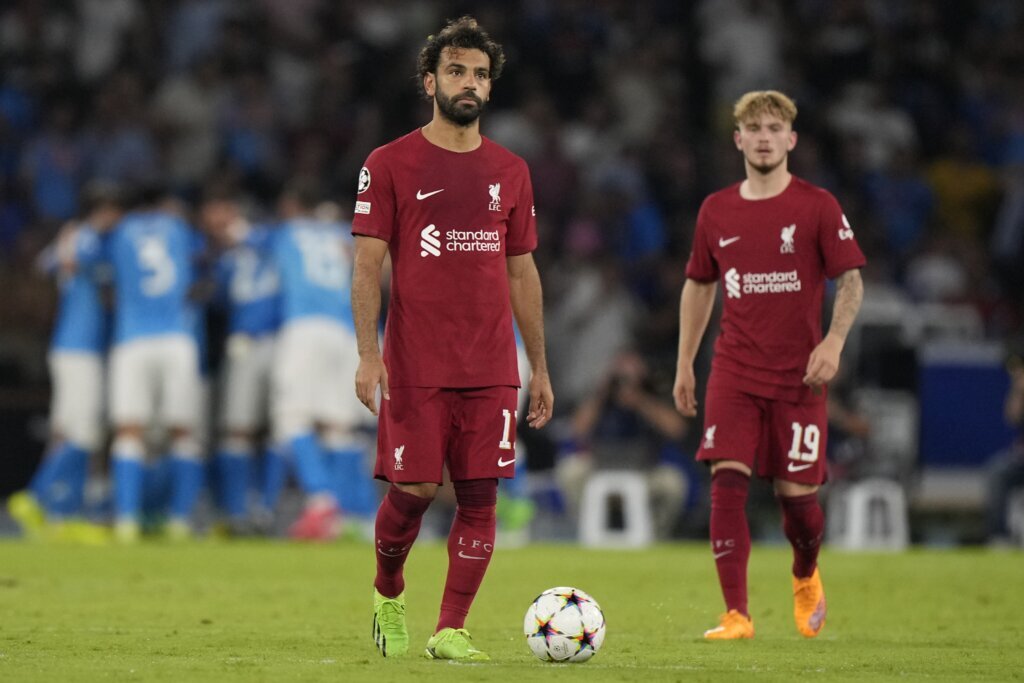 GENEVA (AP) — A long-time criticism of the Champions League group stage? Too many lopsided mismatches as the wealth gap…

GENEVA (AP) — A long-time criticism of the Champions League group stage? Too many lopsided mismatches as the wealth gap between clubs fuels competitive imbalance on the field.

Tell that to favored Liverpool and Eintracht Frankfurt after their heavy losses Wednesday.

Or to coaches Thomas Tuchel and Domenico Tedesco who lost their jobs on the morning after shocking losses for their teams, Chelsea and Leipzig, respectively.

Liverpool slumped to a stunning 4-1 defeat at Napoli where the hosts were four goals up in just 47 minutes at the stadium named for club icon Diego Maradona.

Though Jurgen Klopp’s team has been beaten in just four games in 2022, three were in the Champions League including Real Madrid’s 1-0 win in the final in May.

Eintracht won the Europa League title in May but the German club and the team it beat in the final, Rangers, both found it tough Wednesday on returning to the top-tier competition after long absences.

Eintracht was surprisingly beaten 3-0 at home by Sporting Lisbon just four days after its four-goal rout of Leipzig in the Bundesliga sped up Tedesco’s exit.

Rangers was swept aside in the first half at Ajax before falling to a 4-0 loss.

One night after Kylian Mbappé and Erling Haaland each scored twice in wins for their clubs Paris Saint-Germain and Manchester City, Lewandowski went one better with a hat trick.

Tottenham beat Marseille 2-0 with Brazil forward Richarlison twice scoring with headers late in the game on his Champions League debut.

A remarkable 11-minute period of stoppage time at Atlético Madrid saw the home team open the scoring and be pegged back by a penalty for 10-man Porto before Antoine Griezmann sealed a 2-1 win.

Bayern Munich eased to a 2-0 win at Inter Milan, where Leroy Sané opened the scoring in the first half, and Club Brugge beat struggling Bayer Leverkusen 1-0.

Tuchel was ousted at Chelsea just 15 months after he guided the club to its second Champions League title. The German manager’s dissatisfaction with the club was clear in interviews late Tuesday after a 1-0 loss at Dinamo Zagreb.

Tedesco lasted just nine months at Leipzig, a Champions League semifinalist two years ago, and did not survive a humbling 4-1 home loss to Ukraine’s Shakhtar Donetsk on Tuesday.

IIT JAM 2023: How to apply, eligibility criteria, registration and more