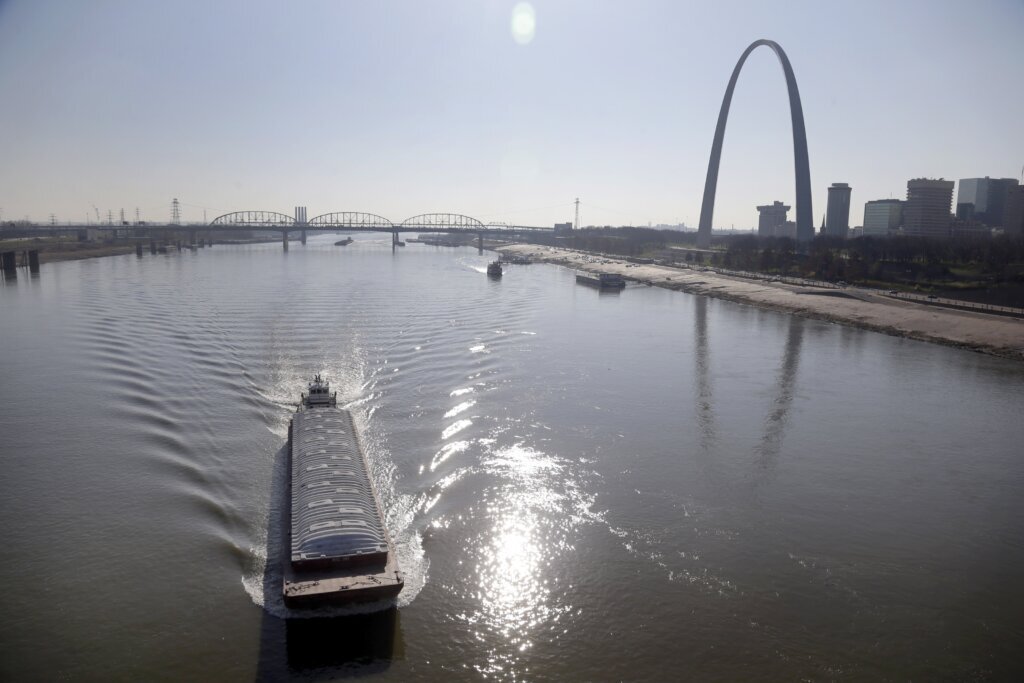 O’FALLON, Mo. (AP) — Parts of the Mississippi River are so low from weeks of drought that barge traffic is…

O’FALLON, Mo. (AP) — Parts of the Mississippi River are so low from weeks of drought that barge traffic is being limited at the worst possible time — as crop harvests begin.

Some Mississippi River communities between St. Louis and New Orleans may see record low water levels in the coming days, including Caruthersville, Missouri, and Osceola, Arkansas. The National Weather Service predicts the reading at Memphis, Tennessee, will reach its second-lowest level ever by Oct. 13.

The timing is bad. Corn and soybeans harvested in the early fall need to be moved, and barges are vital in getting the commodities from one place to another.

Officials with the U.S. Army Corps of Engineers said Thursday that normally, tows are able to move 36 barges at a time. With the water level so low, shippers have voluntarily agreed to cut that to 25 barges.

The U.S. Department of Agriculture’s Grain Transportation Report released Thursday said that 1,890 grain barges have unloaded in New Orleans since Sept. 1, about 39% fewer than the five-year average.

National Weather Service meteorologist Matt Beitscher in suburban St. Louis said nearly all of the Mississippi River basin, from Minnesota through Louisiana, has seen below-normal rainfall over the past 30 days. The basin from St. Louis south has been largely dry for three months, and the forecast calls for the drought to continue, along with warmer-than-normal temperatures.

“Hot and dry does not spell good news for the rivers,” Beitscher said.

Though the Mississippi River is low, there is no evidence that barges or other vessels have grounded, said Lance Engle, dredging project manager for the Corps in St. Louis. He said dredging of the river bottom continues in several spots to help keep traffic flowing.

The river has not been forced to close at any locations, but Joan Stemler, the chief of water control operations in St. Louis for the Corps of Engineers, warned that the flow from the Missouri River, which feeds into the Mississippi north of St. Louis, is expected to drop enough in December that the Mississippi could go up to 3 feet (0.9 meters) lower if dry conditions continue.

The upper Mississippi River, from Minnesota to St. Louis, operates with a series of locks and dams. The river from St. Louis to the south is free-flowing. Stemler said that in a low-water emergency, the Corps can release water from the southern-most dam, near Alton, Illinois, which would increase the depth downriver by a half-foot (15 centimeters).

“But that’s only a one-time shot,” Stemler said. “Once we release that water, we wouldn’t have anything behind it, so we’re kind of stingy with it unless something major occurs for navigation.”

The low water level is having other impacts, too.

On Wednesday, Corps officials in Louisiana said the river level was so low that Gulf of Mexico salt water was creeping farther than usual toward New Orleans and threatening drinking water. The Corps plans an underwater levee to block the wedge of heavier salt water before it can get into water treatment plants.

A ferry that carries vehicles across the river between Kentucky and Missouri closed in mid-September. When the river gets too low, it becomes difficult for vehicles to load and off-load from the Dorena-Hickman Ferry at both landings, the Kentucky Transportation Department said in a statement.