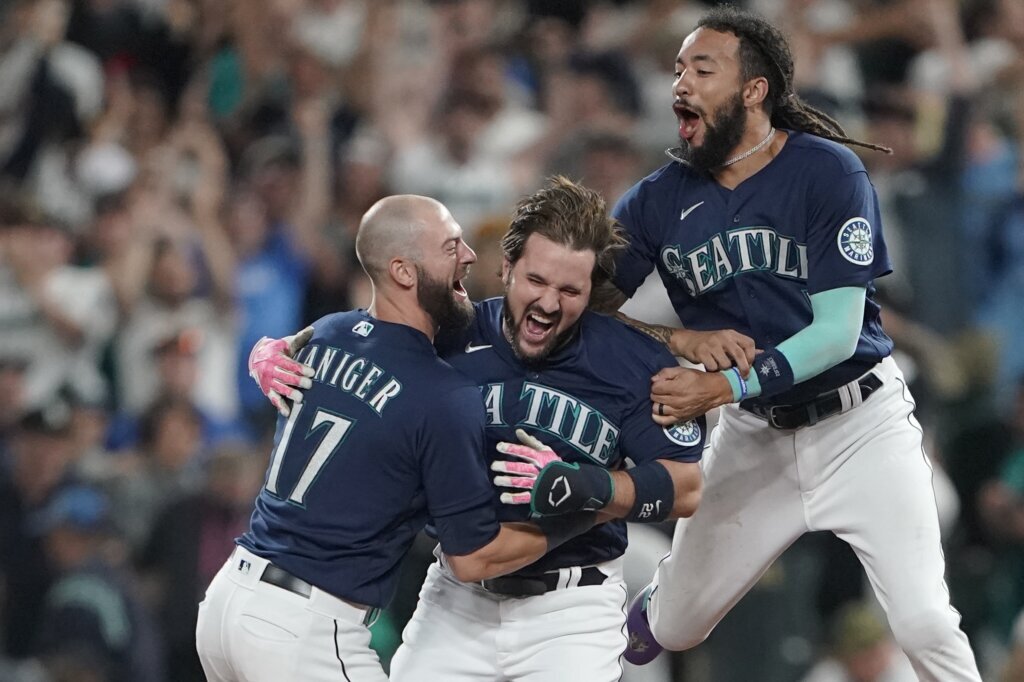 SEATTLE (AP) — Pinch-hitter Luis Torrens singled with one out in the 13th inning to score Eugenio Suárez, and the…

SEATTLE (AP) — Pinch-hitter Luis Torrens singled with one out in the 13th inning to score Eugenio Suárez, and the Seattle Mariners beat the New York Yankees 1-0 on Tuesday night in a game dominated by the starting pitching of Gerrit Cole and Luis Castillo.

The two aces were overpowering into the late innings before turning it over to bullpens that managed to keep the game scoreless deep into the night.

Some bad baserunning by the Yankees helped, as did a lack of execution by the Mariners as both teams had chances early in the extra frames to finally score a run.

It was the first major league game to reach the 13th inning scoreless since Tampa Bay against Detroit on Aug. 17, 2019 — before new rules were implemented in 2020 putting an automatic runner at second base to start each extra inning.

Eventually, the Mariners came through in the 13th. Cal Raleigh singled off Jonathan Loáisiga (1-3) and advanced Suárez from second to third. One out later, Sam Haggerty was intentionally walked to load the bases and Torrens lined an 0-2 pitch into right field to set off a wild, exhausted celebration.

The lack of runs left Castillo and Cole out of the decision on a night when both deserved a victory.

Cole scattered four hits and struck out eight in seven innings — a drastic turnaround after he was rocked for six runs in the first inning less than a week ago when he last faced the Mariners.

Bad baserunning cost the Yankees multiple chances in extra innings. Andrew Benintendi was picked off trying to advance to third with no outs in the 10th. Aaron Hicks lined into a double play leading off the 11th as Miguel Andújar drifted too far from second.

In the 12th, Brash made a spectacular, blind, backhand grab of Isiah Kiner-Falefa’s grounder and caught Jose Trevino in a rundown between second and third. Kiner-Falefa was thrown out trying to advance to second on the play.

Seattle missed chances to end it in the 11th and 12th before finally converting thanks to Torrens.

Castillo bested Cole by finishing off the eighth and pitching out of trouble in the process. Castillo got a groundout from Kiner-Falefa with a runner at third to end the inning.

Castillo was the first Seattle pitcher to throw eight innings this season. It was his third start against the Yankees in the past month. In the three outings combined, Castillo has thrown 21 2/3 innings, allowed four earned runs and struck out 23.

New York placed Matt Carpenter on the 10-day injured list after he broke his left foot in Monday’s game and recalled Andújar from Triple-A Scranton/Wilkes-Barre.

Yankees: 1B Anthony Rizzo was out of the starting lineup for a fifth straight game due to issues with his lower back. Manager Aaron Boone said the team is being extra cautious and the hope remains Rizzo could be back in the lineup for Wednesday’s series finale. Rizzo missed time in July due to the same back issues. “I think it just improved quicker last time. I don’t think the injury itself has been as bad,” Boone said. … Carpenter is expected to see a foot specialist in Seattle on Wednesday before traveling with the team back to the East Coast.

Mariners: CF Julio Rodríguez won’t be activated from the injured list for Wednesday’s series finale. Manager Scott Servais said Rodríguez was still feeling discomfort in his wrist after hitting on Monday. Servais said the goal is for Rodríguez to be ready for Friday’s series opener in Texas. … INF/OF Dylan Moore (back) and RHP Diego Castillo (shoulder) are both expected to be activated from the IL on Wednesday.

Yankees: LHP Nester Cortes (9-3, 2.57 ERA) allowed two runs but just one hit in his last start against St. Louis. Cortes has three starts this season with at least five innings pitched and only one hit allowed.

Mariners: LHP Robbie Ray (8-8, 3.96) faces the Yankees for the first time since leaving the AL East. Ray is 1-3 with a 4.50 ERA in five previous starts against New York. He allowed one run over seven innings in his last outing.