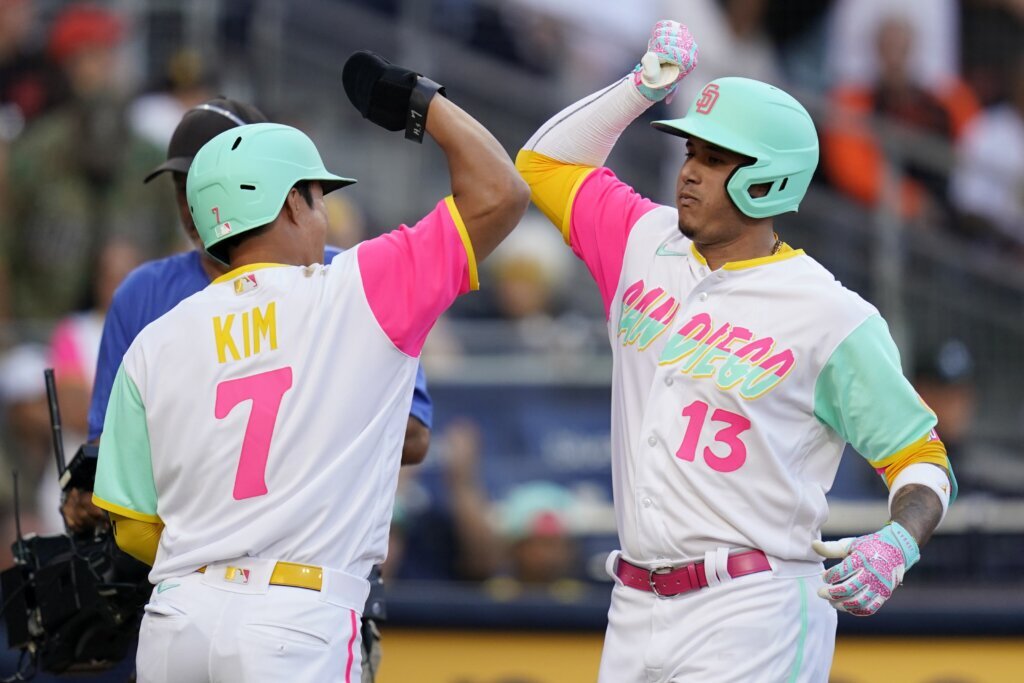 SAN DIEGO (AP) — Manny Machado hit a three-run homer hours after he was named the NL starter at third base for the All-Star Game and Blake Snell struck out 11 for his first victory of the season, leading the San Diego Padres to a 6-3 victory over the sliding San Francisco Giants on Friday night.

Machado was voted to start the All-Star Game in a tight race against St. Louis’ Nolan Arenado. He lifted the Padres to a 3-0 lead before they made an out, sending a drive off Sam Long into the seats in left. It was his second in as many nights and his 14th overall.

It will be Machado’s third All-Star Game start, and first in the NL, up the freeway at Dodger Stadium on July 19.

Snell (1-5) had a second straight strong start and finally earned a win. He permitted one run and three hits in six innings.

Snell’s 11 strikeouts were one off his season high of 12 in his previous outing, when he got a no-decision in a 5-1 loss at the Dodgers on July 1. The Padres had lost all eight of his starts this season.

Snell retired his first nine batters before getting into and out of a bases-loaded jam in the fourth. He loaded the bases with one out before retiring Thairo Estrada and Brandon Crawford.

Nick Martinez pitched three innings for his third save.

Brandon Belt and David Villar homered for San Francisco, which has dropped eight of nine. Villar’s leadoff drive in the fifth was his first career homer, and Belt connected for a two-run shot in the ninth.

The Padres debuted their City Connect uniforms, with bright sherbet-like colors of green, pink and yellow that are supposed to reflect the cross-border cultures of San Diego and Tijuana, Mexico.

Padres: Placed LF Jurickson Profar on the seven-day concussion injured list a day after he collapsed while trying to walk off the field after a scary collision with shortstop C.J. Abrams. Profar also was diagnosed with a strained neck before being discharged from the hospital overnight. OF Brent Rooker was recalled from Triple-A El Paso to take Profar’s roster spot.