MANCHESTER UNITED have been given hope on transfer target Cody Gakpo after PSV Eindhoven reportedly ruled out selling the player to Southampton or Leeds.

The Red Devils were keen on signing the Dutch international, 23, this month when striking a deal for Ajax’s Antony was proving difficult.

PSV quoted the Premier League giants £40million – a fee United were not prepared to pay.

United then returned for Antony, 22, and landed the Brazilian for £85.5m.

Erik ten Hag’s cooling of interest in Gakpo this summer presented an opportunity for other interested parties Southampton and Leeds to make a move.

However, according to The Athletic, PSV do not intend to do business with either Southampton or Leeds – despite reports claiming the Saints had agreed a £34m fee. 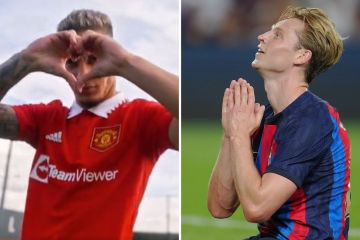 PSV’s refusal comes as Leeds’ Director of Football, Victor Orta, travelled to Holland to attempt to negotiate a deal.

PSV are also hopeful Gakpo will agree to a new lucrative contract.

The new could come as a boost for Man Utd, who may decide to return for Gakpo in the future.

The attacker has seven goals and six assists across all competitions this term.

last season, he netted an impressive 21 times and balanced it out with 15 assists.

Gakpo has admitted it has been difficult to shut out all the noise surrounding his future.

Earlier this month, he declared: “There are also other options, United are a serious option.

“I can hear it all. I try to shut myself off from it, but it’s difficult.”

Poland marks WWII anniversary with report on damage by Nazis

Escobar rallies Mets past Marlins in 10, back into 1st…