Mariota, Ridder solid for Falcons in 24-16 loss to Jets 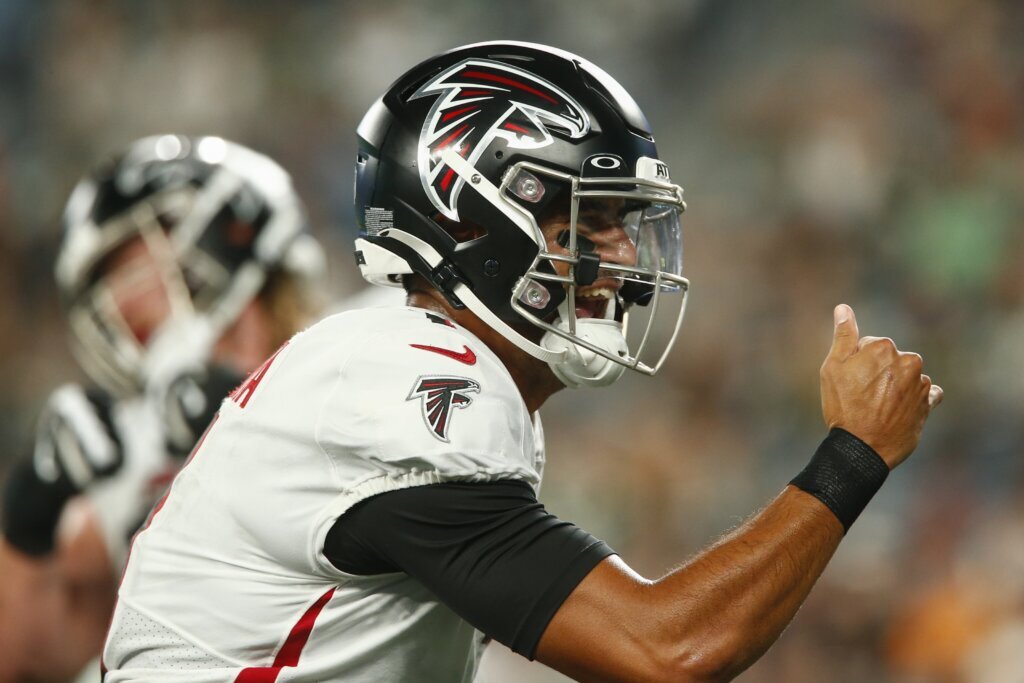 EAST RUTHERFORD, N.J. (AP) — Marcus Mariota led Atlanta to scores on two of his three drives in the Falcons’…

Mariota, who strengthened his hold on the starting job, was 6 of 10 for 132 yards and a touchdown pass to Olamide Zaccheaus before giving way to rookie Desmond Ridder with a 10-0 lead in the second quarter.

“The last couple years were a good reset for me, but I’m excited about the opportunity, excited about this team,” said Mariota, who hasn’t started a regular-season game since 2019 with Tennessee.

Ridder, a third-round pick out of Cincinnati, wasn’t too shabby, either, going 10 of 13 for 143 yards and leading the Falcons to two field goals during his three series that were marred by penalties. Feleipe Franks replaced him midway through the third quarter.

Tight end Kyle Pitts was one of only a few other projected Falcons starters who played — and made his presence felt early with a 52-yard reception on Atlanta’s second play from scrimmage. He got wide open on Bryce Hall, who’s competing with rookie Sauce Gardner for a starting job at cornerback, to put the Falcons at the Jets 9.

The drive stalled, though, and the Falcons had to settle for a 23-yard field goal by Younghoe Koo. But Mariota led Atlanta into the end zone on the next possession. He hit a wide-open Anthony Firkser for a 39-yard gain to get to the Jets 14, and then found Zaccheaus for a 13-yard TD two plays later.

The Jets sat most of their projected starters, including quarterback Joe Flacco — who took over as New York’s QB1 in place of the injured Zach Wilson.

Wilson is out a few weeks as he recovers from a bone bruise and surgically repaired torn meniscus in his right knee, with his availability for the season opener against Baltimore on Sept. 11 uncertain. It would be Flacco under center if Wilson can’t go, but Mike White got the start against the Falcons and was mostly ineffective with the backups.

White went 12 of 17 for 90 yards, and the offense punted on each of his first four series before Greg Zuerlein’s 44-yard field goal ended the first half with the Jets trailing 16-3.

Fourth-stringer Chris Streveler, who hadn’t thrown a pass in team drills before leading the Jets to two touchdowns in the preseason opener at Philadelphia, was at it again against Atlanta.

The former CFL quarterback, who had previous NFL stints with Arizona, Baltimore and Miami, replaced White in the third quarter and engineered TD drives in his first two series.

First came a 34-yard TD pass to Lawrence Cager, then an eight-play drive that was capped by La’Mical Perine’s 7-yard run that gave the Jets a 17-16 lead 11 seconds into the fourth quarter.

Streveler finished 8 of 11 for 119 yards and the TD with an interception. He also led the Jets with 33 yards rushing on six carries.

Jets defensive lineman Bradlee Anae, competing for a roster spot on a deep unit, made his case to stick around. He sacked Franks, causing him to fumble, and then picked up the ball and rumbled 30 yards into the end zone for a touchdown that gave New York a 24-16 lead.

Ridder led the Falcons to the Jets 1 in his first series, but a false start penalty on offensive lineman Jalen Mayfield on fourth down had Atlanta opt instead for a 23-yard field goal by Koo.

The next drive featured five more penalties — four on the Falcons, with one declined — and Atlanta settled for a 30-yard field goal.

Jets WR Tarik Black was being evaluated for a concussion. … Jets WR Irvin Charles left with a rib injury in the fourth quarter.

Falcons: Wrap up their preseason schedule by hosting Jacksonville on Saturday.

Jets: Host the Giants on Sunday in their annual preseason showdown.