Domestic stocks tumbled for a fourth consecutive session on Monday as the rout in global markets continued with the surging US dollar and Treasury yields creating havoc.


The aggressive monetary stance by the US Federal Reserve saw the 2-year Treasury note notching a 15-year high of 4.2 per cent and the yield on the 10-year note going past 3.8 per cent, an 11-year high. The US dollar continued to scale new highs against most global currencies, including the rupee and the British pound. Experts said the US bond markets were signalling a recession, leading to a pullback from risky assets.


The India VIX index rose 6.1 per cent to close near 22, a level last seen in June when the markets had bottomed out. The surge in the VIX index suggests more turbulence ahead for the markets, said experts. 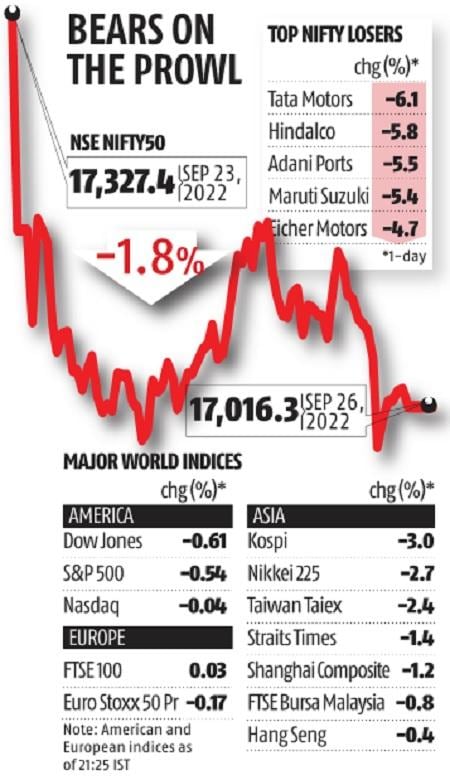 The rupee finished at a fresh all-time low of 81.62, while the yield on 10-year government security shot up to 7.36 per cent, hardening nearly 30 basis points in a fortnight.


The yield movement is a sign that the Reserve Bank of India will be compelled to lift rates aggressively, said experts.


Foreign portfolio investors (FPIs) sold shares worth Rs 5,101 crore on Monday. A weak rupee eats into the returns of overseas investors and weighs on incremental flows.


With Monday’s fall, the aggregate market capitalisation of all companies listed on the BSE declined by Rs 6.67 trillion to Rs 270.15 trillion. In the past nine trading sessions, or since the Sensex’s recent high made on September 13, the combined market cap of these companies has fallen by Rs 16.71 trillion from Rs 286.86 trillion.


While concerns around a more aggressive monetary stance have been there for some time, the domestic markets have proved to be more resilient compared to their global peers. However, with the fall in the rupee and reversal in FPI flows, the domestic markets, too, are showing cracks.


“We have problems in major currencies, including the sterling, which means the dollar is going to be stronger and become more of a haven. As our currency depreciates, we import more inflation, which is the same problem as in Europe. The fear is that what’s happening in Europe could lead to a bigger problem, which is more financial in nature,” said Andrew Holland, CEO of Avendus Capital Alternate Strategies.


Analysts said investors are assessing the impact of Fed rate hikes on the world economy and corporate earnings as central bankers sacrifice growth to bring inflation down.


“Recession fears in the US and European countries, the Russia-Ukraine war, and the political uncertainty in China have further cast a cloud of uncertainty over the global economy. This led to the US 10-year bond yield to its highest since 2010. A recession would have an impact on our country’s exports as demand for goods and services would begin to dry up,” said Sandeep Bhardwaj, CEO, IIFL Securities.


The Indian markets are still up 11 per cent from their June lows even as most global peers have plunged to multi-year lows. The MSCI All Country index has dropped to its lowest level since 2020. The Nifty index still trades 19 times its estimated one-year forward earnings, higher than the historical average of 16 times.


The market breadth was weak, with four stocks declining for every one advancing on the BSE. All the Sensex constituents barring seven ended the session with losses. Reliance Industries fell 2.5 per cent and contributed the most to the Sensex losses, followed by ICICI Bank, which fell 2.5 per cent. Among the BSE’s 19 sectoral indices, the IT index finished with gains, albeit marginal. 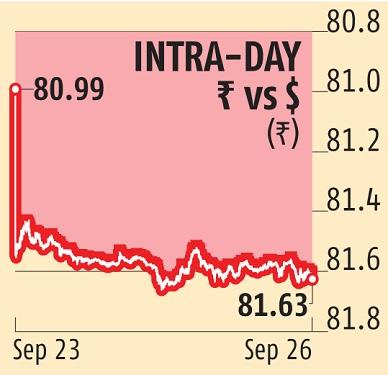