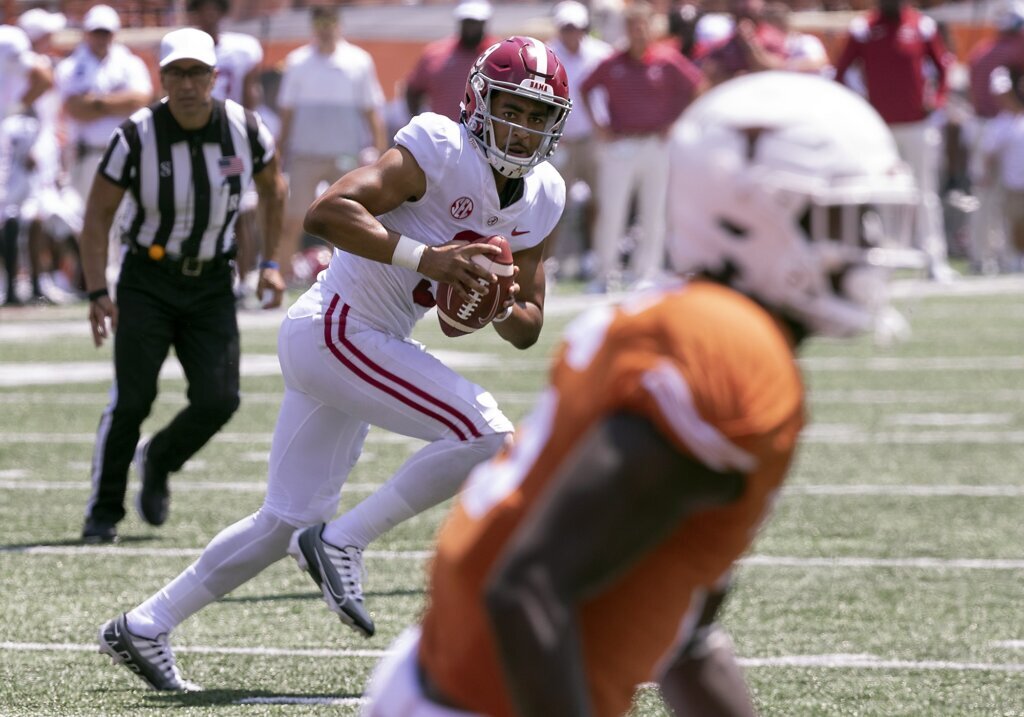 Steven Gilmore returned an interception 37 yards for a touchdown late in the fourth quarter and Khalan Labron ran for 163 yards as Marshall shocked No. 8 Notre Dame 26-21 on Saturday, making Marcus Freeman the first Fighting Irish coach to lose his first three games.

Gilmore, the brother of Stephon Gilmore of the Indianapolis Colts, picked off a pass by Tyler Buchner with 4:35 left, raced to the end zone and then jumped into the stands where Marshall fans were already celebrating.

Marshall (2-0), the first Sun Belt Conference team to play at Notre Dame Stadium, beat a team ranked in the top 10 for just the second time in school history.

The Irish had a streak of 42 straight wins against unranked opponents snapped. Freeman, the 36-yeard-old first-time head coach who was promoted after Brian Kelly left for LSU, had lost a bowl game to Oklahoma State and also lost at Ohio State last week.

The Herd took a 19-15 lead with 5:16 remaining when Henry Colombi completed a 3-yard touchdown pass to Devin Miller. The score was set up by a 42-yard run by Laborn, who broke a tackle at the line of scrimmage and juked Irish safety Brandon Joseph before breaking free.

Any hope for a comeback by the Irish (0-2) ended when Owen Porter intercepted a pass by backup Irish quarterback Drew Pyne with three minutes remaining.

AUSTIN, Texas (AP) — Will Reichard kicked a 33-yard field goal with 10 seconds left, and Bryce Young and Alabama overcame a stifling defensive effort by Texas to earn a hard-fought victory. Young was hit and harassed by the Texas defense most of the game, but the Heisman Trophy-winning quarterback put together a big fourth quarter.

He had a twisting, off-balance touchdown pass, and then a 20-yard scramble in the final minute to set up Reichard’s winning kick. Young easily dodged a blitzing defender, then had wide open field ahead of him to scamper.

Young’s clutch play rescued Alabama on an uncharacteristically sloppy day when the Crimson Tide (2-0) struggled with penalties and dropped passes and was forced into six consecutive punts in one stretch. Texas (1-1) stuffed Alabama on fourth-and-inches late to set up a go-ahead field goal by Bert Auburn with 1:39 remaining.

Young also spoiled what could have been a program-defining victory for Texas and second-year coach Steve Sarkisian. Longhorns quarterback Quinn Ewers was knocked out with a shoulder injury at the end of the first quarter.

One week after giving up only a field goal in a 49-3 season-opening rout of then-No. 11 Oregon, Georgia’s defense again played up to the standard it set while winning last season’s national championship. Samford (1-1) was held to 128 yards and three first downs.

Georgia (2-0) has reloaded on defense after losing eight players in this year’s NFL draft, including five in the first round. Overall, Georgia had a record 15 players taken in the draft.

Bennett completed 24 of 34 passes, including a 3-yard scoring pass to freshman Dillon Bell.

Henderson busted through for an 8-yard scoring run in the first quarter and a 23-yard romp to open the second half. He finished with 10 carries for 87 yards.

Kicker Dominic Zvada was responsible for all of the scoring for Arkansas State (1-1).

Uiagalelei directed the Tigers (2-0) to touchdowns on his first five drives and Clemson was up 21-3 early in the second quarter. It was Clemson’s eighth straight victory, longest among Power Five teams. It was also the Tigers’ 35th straight win at home and 32nd in a row over Furman.

Appalachian State won a week after scoring six touchdowns and 40 points in the fourth quarter in a 63-61 opening loss to North Carolina.

Appalachian State (1-1) settled for a 29-yard field goal by Michael Hughes to take a 17-14 lead with about eight minutes left after Christian Wells was wide open but dropped a touchdown pass on third down.

SALT LAKE CITY (AP) — Cameron Rising threw for 254 yards in the first half and Dalton Kincaid had 107 yards receiving and two touchdowns in Utah’s rout of Southern Utah.

Utah scored on nine consecutive drives, including eight touchdowns, over the final three quarters against the FCS Thunderbirds (1-1). The Utes (1-1) had 599 yards of total offense.

As six-touchdown underdogs, the Thunderbirds weren’t afraid of taking some risks. They started the game with an unsuccessful onside kick that led to a 13-yard touchdown run by Tavion Thomas.

Thomas scored on another touchdown run early in the second quarter. Utah then turned a fourth-down stop into a field goal and a diving interception by Junior Tafuna into Chris Curry’s TD run.

The Ute defense held the Thunderbirds to 85 total yards despite scoring quickly throughout the game.

It was the largest margin of victory for Michigan State (2-0) since it beat Eastern Michigan by 59 points in 2014.

Kendell Brooks, filling in for injured starting safety Xavier Henderson, forced the ball out twice in the first quarter. He has forced three fumbles in the Spartans’ first two games.

Akron (1-1) starting quarterback DJ Irons was knocked out of the game with just over six minutes left in the first half.

MIAMI GARDENS, Fla. (AP) — Miami used a pair of third-quarter touchdowns barely 2 minutes apart to pull away in the second half against Southern Miss.

The Hurricanes (2-0) trailed for most of the second quarter, then shook off the slow start by scoring the game’s final 27 points. Henry Parrish rushed for 97 yards and a score.

Thaddius Franklin Jr. rushed in from 7 yards out for a 17-7 third-quarter lead, quarterback Tyler Van Dyke connected with Key’Shawn Smith for a 35-yard flea-flicker touchdown on Miami’s next offensive snap, and the outcome wasn’t in doubt again.

Jason Brownlee caught a 32-yard touchdown pass from Zach Wilcke for Southern Miss (0-2). That capped a six-play, 75-yard drive for the Golden Eagles — but they managed only 122 yards on their next seven drives, five of which ended in punts.

FAYETTEVILLE, Ark. (AP) — Rocket Sanders ran for a career-high 156 yards and scored Arkansas’ first two touchdowns, and KJ Jefferson ran for a score and threw for another to lift the Razorbacks past the Gamecocks.

Spencer Rattler was 23 of 38 with 361 yards passing for South Carolina (1-1, 0-1), though 173 of those came in the fourth quarter when the Gamecocks were chasing from way behind.

PITTSBURGH (AP) — Hendon Hookier threw for 325 yards and two touchdowns, the final one a 28-yard heave to Cedric Tillman in overtime, to give the Volunteers an overtime win against the Panthers.

The Volunteers (2-0) picked up the first significant nonconference win under second-year coach Josh Heupel by relying on Hooker and a defense that was just good enough against a game effort by the Panthers (1-1), who lost starting quarterback Kedon Slovis to a injury at the end of the first half.

Backup Nick Patti essentially played the fourth quarter and overtime on one leg, limping noticeably on every play after absorbing a sack early in the final quarte. But Patti found Jared Wayne for a diving 4-yard touchdown with 2:23 to go in regulation to tie the game.

Tillman caught nine passes for 162 yards and a touchdown. Jabari Small ran for two short scores for the Volunteers.

Israel Abanikanda ran for 154 yards and a touchdown for the Panthers. Slovis completed 14 of 24 for 195 yards with a touchdown and an interception.

Leary threw four TD passes, including a perfect 24-yard wheel route to Jordan Houston down the left side and then a 40-yard strike over the middle to Anthony Smith.

N.C. State (2-0) regrouped from last week’s 21-20 win at East Carolina. The top highlight for Charleston Southern (0-2) was a 48-yard field goal from Sam Babbush midway through the third quarter to break up the Wolfpack’s shutout bid.

Watson scored on a 2-yard run in the second quarter and put the Cougars (2-0) ahead for good by turning a short completion into a 31-yard score with 5:12 left in the third quarter. Watson rushed for 522 yards and five touchdowns at Wisconsin from 2019-20 before transferring.

Wisconsin (1-1) trailed 17-14 and faced third-and-6 from the Washington State 9 midway through the fourth quarter when defensive tackle Christian Mejia picked off a Graham Mertz pass before losing the football. Wisconsin recovered at the Washington State 20, but a personal foul on Badgers tight end Clay Cundiff after the play pushed them back to the 35.

Cundiff then caught a 24-yard pass, but Quinn Roff forced a fumble that Sam Lockett III recovered at the 12 with 5:14 left. Washington State never gave up possession the rest of the way.

NASHVILLE, Tenn. (AP) — Sam Hartman passed for 300 yards and four touchdowns in Wake Forest’s win over Vanderbilt, connecting on 18 of 27 passes after he missed the season opener against VMI because of a blood clot.

Hartman’s 68-yard touchdown pass to A.T. Perry lifted Wake Forest (2-0) to a 14-3 lead with 36 seconds left in the first quarter. He found Christian Turner for a 2-yarder early in the second quarter, and then threw second-half touchdown passes to Taylor Morin and Cameron Hite.

A.J. Swann passed for two touchdowns for Vanderbilt in relief of Mike Wright. Swann also ran for a 2-point conversion.

A back-and-forth finish ended with the Red Raiders (2-0) beating a ranked nonconference opponent in the regular season for the first time since 1989, a span of 14 games.

After Houston’s Bubba Baxa opened the second OT with a 20-yard field goal, Smith broke into the open field and ran untouched to the end zone, sending Texas Tech students and fans streaming onto the field.

Baxa kicked a go-ahead 35-yard field goal with 37 seconds remaining in regulation after Gervarrius Owens returned Smith’s second interception to the Texas Tech 21 in the final two minutes. Smith answered by leading the Red Raiders to a tying 47-yarder from Trey Wolff with three seconds to go.

The upper house of Russian parliament has ratified…