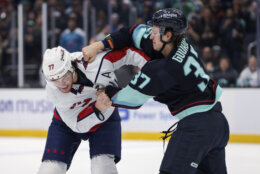 SEATTLE (AP) — Jaden Schwartz was grabbing a drink of water when he looked up and saw Matty Beniers breaking in alone on goal.

Seattle’s rookie wasted no time sending the Kraken to their seventh straight victory.

“I looked up and he was on a breakaway. It happened fast, but they were hungry off the faceoff,” Schwartz said.

Beniers scored seven seconds into overtime and the Kraken rallied to beat the Washington Capitals 3-2 on Thursday night.

Beniers won a faceoff scrum to begin the overtime, got a tip from Andre Burakovsky and beat Darcy Kuemper for his 10th goal of the season to extend Seattle’s franchise-record winning streak.

Per the NHL, it was the fastest overtime goal by a rookie in a regular-season game.

“It’s all about your your battle level and your 50/50 puck wins and they created that,” Seattle coach Dave Hakstol said. “It was a 50/50 bouncing puck, we won that, (Burakovsky) did a good job and Matty had some good opportunities tonight and he finished that one at the right time.”

Coming off a 10-1-1 November, the Kraken overcame a 2-0 deficit to keep their streak rolling. Yanni Gourde scored with 2:27 left in regulation, jamming a rebound past Kuemper. Seattle controlled play for most of the third period and finally got rewarded with Gourde’s third goal of the season that forced overtime.

Schwartz added a power-play goal for Seattle in the second period when he flicked the rebound of Vince Dunn’s shot from the point past Kuemper.

“We’ve been doing a good job of finding ways to win and staying with it,” Schwartz said. “A lot of momentum swings in games and we’re doing a pretty good job of managing that.”

Philipp Grubauer made 21 saves and was solid all night facing his former team. It was just his second start since coming off injured reserve.

“The first period was a little tough, I think two goals on three or four shots. Not how you want to start things off,” Grubauer said. “The second period went well and I think that’s a period I needed personally for myself to get back into this.”

Martin Fehervary and Conor Sheary scored first period goals, but the Capitals were unable to withstand Seattle’s pressure in the second and third periods.

Fehervary scored at 7:36 and Sheary added a power-play goal with 5:56 to go to give the Capitals a 2-0 lead. Alex Ovechkin assisted on both goals, the fourth time in five games Washington’s captain had multiple points.

Kuemper finished with 22 saves for Washington.

“Our game has definitely been trending upwards. Tonight we might might not have had our best stuff, or all our legs but we got up to the lead and unfortunately couldn’t hang on for the two,” Kuemper said.

TJ Oshie played near his hometown for the first time in his career having missed Washington’s trip to Seattle last season due to injury. Oshie didn’t waste becoming involved in the action, getting into a fight with Seattle’s Yanni Gourde during the first period. It was the first fight for Oshie since early in the 2021-22 season and his second career fight against Gourde, tangling once previously when Gourde was in Tampa Bay.

Capitals: At Calgary on Saturday night.

Tata Steel hits over 3-month high in a weak market; stock up 6% in 4 days