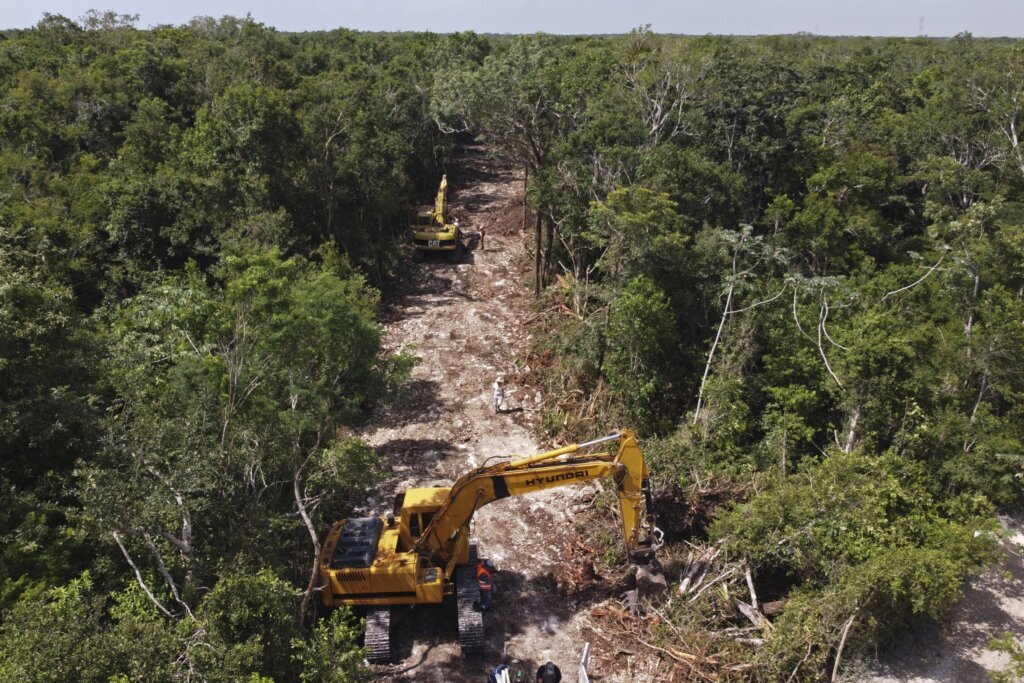 VIDA Y ESPERANZA, Mexico (AP) — Mexico’s ambitious Maya Train project is supposed to bring development to the Yucatan Peninsula, but along the country’s Caribbean coast it is threatening the Indigenous Maya people it was named for and dividing communities it was meant to help.

One controversial stretch cuts a more than 68-mile (110-kilometer) swath through the jungle between the resorts of Cancun and Tulum, over some of the most complex and fragile underground cave systems in the world.

It is one of President Andrés Manuel López Obrador’s signature projects and has drawn objections from environmentalists, archaeologists and cave divers, who have held protests to block backhoes from tearing down trees and scraping clean the thin layer of soil.

But for the largely Maya inhabitants of the village of Vida y Esperanza – a clutch of about 300 people and 70 houses whose name means “Life and Hope” – the train is going to run right by their doors. They fear it will pollute the caves that supply them with water, endanger their children and cut off their access to the outside world.

A few miles away from the acres of felled trees where the train is supposed to run, archaeologist and cave diver Octavio Del Rio points to the Guardianes cave that lies directly beneath the train’s path. The cave’s limestone roof is only two or three feet thick in some places, and would almost certainly collapse under the weight of a speeding train.

“We are running the risk that all this will be buried, and this history lost,” Del Rio says.

As with his other signature projects, including a new airport in the capital and a massive new oil refinery on the gulf, the president exempted the train from environmental impact studies and last month invoked national security powers to forge ahead, overriding court injunctions.

Many critics say López Obrador’s obsession with the projects threatens Mexico’s democratic institutions. But the president counters that he just wants to develop the historically poor southern part of Mexico.

“We want to take advantage of all the tourism that arrives in Cancun, so they can take the Maya Train to see other natural beauty spots, especially the ancient Mayan cities in Yucatán, Campeche, Chiapas, Tabasco,” which are poor neighboring states, López Obrador said earlier this month.

But the Maya themselves are people scraping a living from the limestone bed of the dry tropical jungle. The ancient Mayan civilization reached its height from 300 A.D. to 900 A.D. on the Yucatan Peninsula and in adjacent to parts of Central America, and they are best known for constructing monumental temple sites like Chichen Itza.

The Mayas’ descendants continue to live on the peninsula, many speaking the Mayan language and wearing traditional clothing, while also conserving traditional foods, crops, religion and medicine practices, despite the conquest of the region by the Spanish between 1527 and 1546.

“I think that there is nothing Maya” about the train, said Lidia Caamal Puc, whose family came from the Mayan town of Peto, in the neighboring Yucatan state, to settle here 22 years ago. “Some people say it will bring great benefits, but for us Mayas that work the land, that live here, we don’t see any benefits.”

“Rather, it will hurt us, because, how should I put it, they are taking away what we love so much, the land.”

When marines showed up last month to start cutting down trees in preparation for the train on the edge of the village, residents who hadn’t been paid for their expropriated land stopped them from working.

The head of the village council and a supporter of the train, Jorge Sánchez, acknowledged that the government “had not paid the people who were affected” even though the government has said they will get compensation.

But it’s not just about the money, Sánchez said. “It will bring back jobs for our people.”

The 950-mile (1,500-kilometer) Maya Train line will run in a rough loop around the Yucatan Peninsula, connecting beach resorts and archaeological sites. But in Vida y Esperanza, the train will cut directly through the narrow, rutted four-mile (six-kilometer) dirt road that leads to the nearest paved highway.

For more than two years, Mayan communities have been objecting to the train line, filing court challenges arguing the railway violated their right to a safe, clean environment, and to be consulted; in 2019, the Mexico office of the U.N. High Commissioner for Human Rights found that what consultations the government did do were flawed.

The question about the economics of the train, and tourism income, is more complex, in part because no credible feasibility studies were done. The project is expected to cost about $8 billion — but appears likely to rise to as much as $11 billion — while the government calculates it will bring in $9.5 billion in revenue or “benefits.”

But those estimates are widely doubted because López Obrador is essentially betting on luring sun-and-sand beachgoers to the ruins and Indigenous towns for so-called “cultural tourism.” It is not clear how many want to combine those two activities, especially if the highspeed train zooms past the beauties of the low jungle.

International tourism to the country has started to recover from pandemic losses, with the strongest showing from U.S. visitors. In the first half of 2022, just over 10 million tourists arrived from January to June, 1.5% higher than the first half of 2019. But overall tourist spending remains below pre-pandemic levels.

Unless the army, which is building the train line, constructs a large overpass bridge above the tracks, villagers would be forced to take a back road four times as long to get to the highway. It would no longer make economic sense to live there.

The government tourism agency that oversees the train project, Fonatur, says an overpass will be built for Vida y Esperanza. But such promises have gone unfulfilled in the past.

The high-speed train can’t have at-grade crossings, and won’t be fenced, so that 100-mile per hour (160-kph) trains will rush past an elementary school. Most of the students walk to get there.

Luis López, 36, who works at a local store and opposes the train, said “it might bring minor benefits, but it has downsides.”

“The cenotes will be filled or contaminated,” he said, referring to the sinkholes that villagers rely on. “I survive on the water from a cenote, to wash dishes, to bathe.”

Many residents of Vida y Esperanza, who rely on diesel generators, would much rather have electricity than a tourist train that will rush by and never stop there.

Mario Basto, 78, a wiry resident who works as a gardener, said he’d rather have decent medical care than the train.

“It seems like the government has money it just needs to get rid of, when there are hundreds of hospitals that don’t have medicine,” Basto said.

And there are some people in Vida y Esperanza who support the train project, almost entirely because of jobs it has brought during construction.

Benjamin Chim, a taxi and truck driver who is already employed by the Maya Train, will also lose part of his land to the project. But he says he doesn’t care, noting “it is going to be a benefit, in terms of jobs.”

“They are taking a bit of land, but it’s a bit that doesn’t have any symbolic value, for me it doesn’t mean anything,” Chim said.

While the president’s supporters have claimed that anybody who opposes the train isn’t really Mayan, that would be news to people in Vida y Esperanza, where residents swear that Mayan spirits, known as “Aluxes,” inhabit the forest.

Locals pacify the spirits by leaving a small drink of wine out for them.

And it would also threaten something older than even the Mayas.

Del Rio, the archaeologist, discovered human remains of the Maya’s ancestors that may date as far back as 13,700 years in another cave network – but it took him and other divers 1 1/2 years to snake through a single cavern system. “This is work that takes years, years,” he said.

López Obrador wants to finish the entire train in 16 months by filling the caves with cement or sinking concrete columns through the caverns – the only places that allowed humans to survive in this area.

But for the villagers, much of the damage has already been done.

“They have already stolen our tranquility, the moment they cut through to lay the train line,” Caamal Puc said.