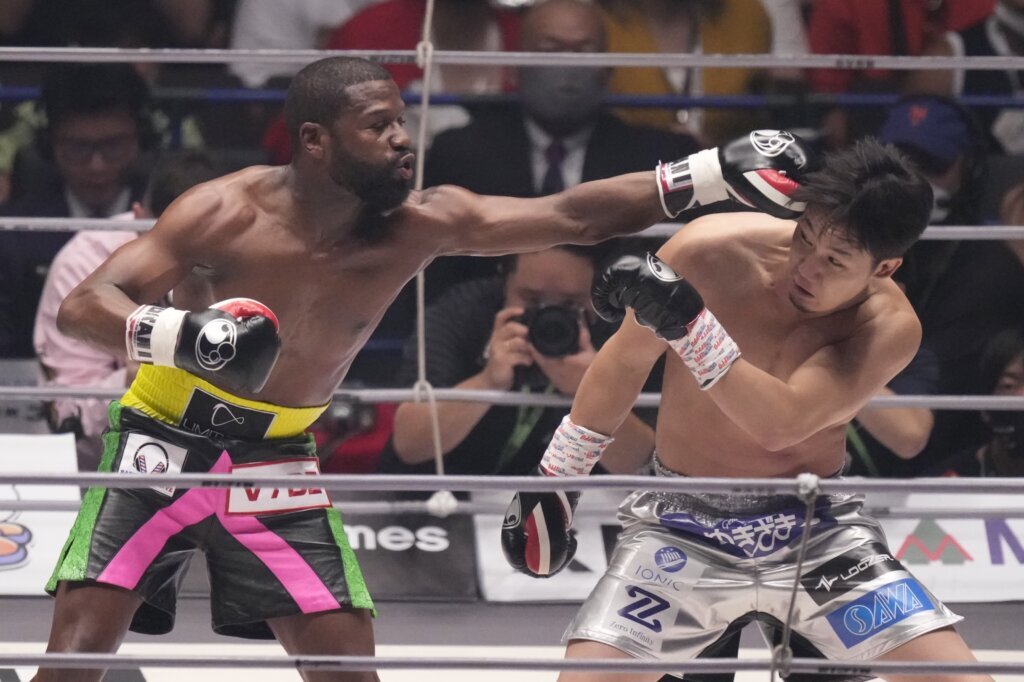 SAITAMA, Japan (AP) — Floyd Mayweather Jr. easily knocked out his opponent in the second round of an exhibition match…

SAITAMA, Japan (AP) — Floyd Mayweather Jr. easily knocked out his opponent in the second round of an exhibition match in Japan Sunday, said he had fun and promised to be back next year.

“I’d like to thank the whole country of Japan,” the 45-year-old boxing legend, who won all 50 of his professional fights, told a packed crowd at Saitama Super Arena, north of Tokyo.

Mikuru Asakura, 30, a popular Japanese MMA, or mixed martial artist, fighter, managed to land a few punches in his boxing debut. But Asakura crumpled to the floor in the second round when Mayweather became more aggressive. When Mayweather landed a right hook in his face toward the end of that round, Asakura went down again and was unable to get up.

“I don’t remember what hit,” Asakura said after the fight. “I have a huge headache.”

Mayweather has stood out among boxing champions in how he has leveraged his legacy toward financial success. What he did was easy, despite being jet-lagged, he said.

“Boxing for me is like breathing,” Mayweather told reporters.

He stressed he knew when to retire while remaining a big name in boxing. He was not interested in suffering physical hardships that may permanently damage his body, hinting opponents in exhibitions matches weren’t serious boxers.

The fight was a collaboration between Mayweather Promotions, based in Las Vegas, and Japan’s Rizin Figthing Federation. There were no weight restrictions, and Mayweather’s bout was to last up to three rounds.

Mayweather said he wanted more collaborations with Rizin, bringing such entertainment to the U.S. He has another exhibition fight in November in Dubai.

Last time Mayweather did an exhibition match in Japan, in 2019, he knocked out kickboxer Tenshin Nasukawa even more quickly, in the first round. But that hasn’t hurt Nasukawa, still a star here, singing and dancing in the half-time show of Sunday’s event.

“Thanks for having me. I’ll be back,” said Mayweather.