Alan Shearer’s daughter Hollie, 27, has become a face in her own right.

While her dad is on World Cup duty in Qatar with the BBC, the stunning blonde has been sharing her glam life.

On Tuesday night, as England beat Wales, the wannabe singer dressed up in a stunning red dress for a dinner date and posted an image online.

Hollie has become quite the favourite on social media – amassing almost 70,000 followers on Instagram.

But Hollie has bigger aspirations. She would love to live in Nashville and perform in the city better known as Music City. 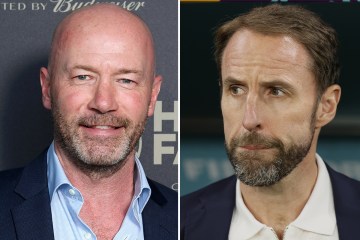 On Insta, Hollie describes herself as a singer/songwriter.

And she shares several clips of songs she has written, as well as videos of her own live performances.

Last May, she released her first track Love You Better and records just over 30,000 monthly listeners on Spotify.

Her music is a big hit with fellow Geordies Ant and Dec, who gave it the stamp of approval on Instagram.

Back in August, she showcased her talents at the Spice of Life jazz club – in the heart of London’s Soho.

Then in September, she uploaded an incredible cover of Lewis Capaldi’s hit Forget Me.

Hollie is desperate to perform in the city that lives and breaths music – Nashville, Tennessee.

She writes on Insta bio: “Just A Girl Wishing She Lived In Nashville.”

When Hollie isn’t singing for her supper, she’s often seen on a glam retreat.

Only in September, the gorgeous influencer showed off some holiday snaps in sunny Barbados.

Wearing a revealing bikini, Hollie wasn’t afraid to show off her enviable figure.

She also channeled her inner sailor – hiring a boat for the day.

She shared a snap on the beach giving him a kiss. She captioned the pic: “Love you.”

In April, Hollie confirmed she was dating Harlequins centre Marchant, 26.

However, the rugby star had appeared on her Instagram feed a month prior on a trip to Dubai.

He has appeared 15 times for England, since making his debut in 2019 in a World Cup warm-up match against Wales.