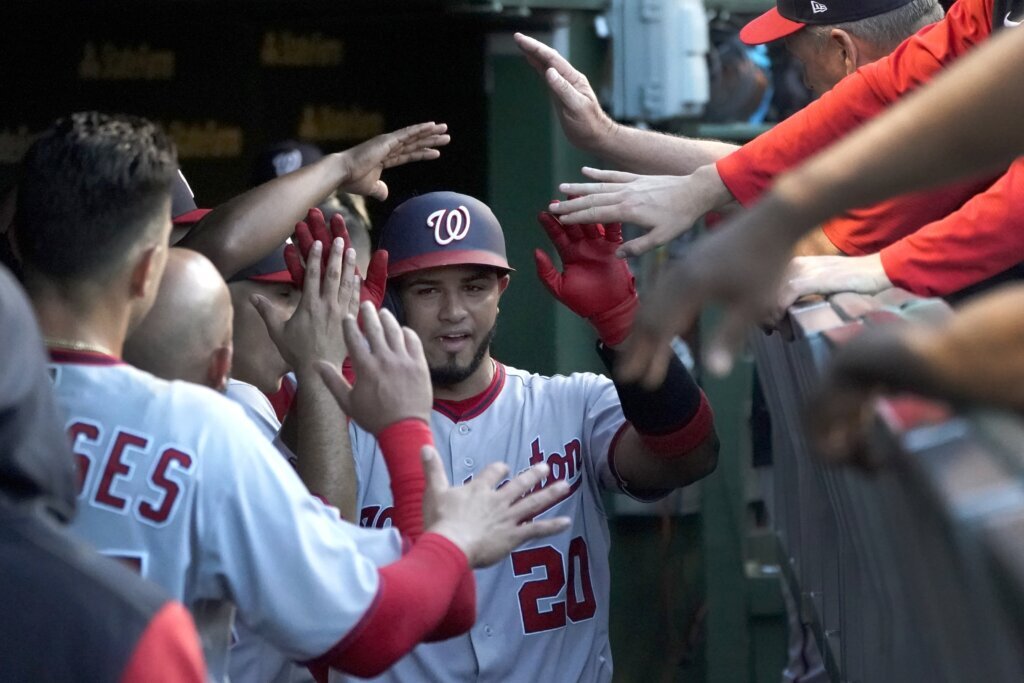 The Nationals were rolling along with a 4-1 lead, thanks to Ruiz’s solo drive in the second and three-run shot in the fourth against Marcus Stroman. It was the first career multi-homer game for the 24-year-old Venezuelan.

Chicago scored four in the seventh to go up 5-4, capped by RBI singles by newcomer Franmil Reyes and Nico Hoerner against Kyle Finnegan. But the Nationals regrouped.

Meneses came through against Mark Leiter Jr. (2-5) in the eighth, after Maikel Franco singled with one out and Yadiel Hernandez struck out. He launched a drive to the left-field basket, putting Washington back on top, 6-5.

The Cubs had a runner on second with two out in the bottom half when Carl Edwards Jr. came into the game and struck out Willson Contreras. He then worked the ninth for his first save.

Edwards gave up a one-out single to Seiya Suzuki, who was was caught stealing. Edwards then walked Nelson Velázquez before Nico Hoerner struck out looking at a 3-2 pitch.

Suzuki homered leading off the second against Washington starter Paolo Espino. He had three hits and scored two runs.

Rafael Ortega and Willson Contreras had RBI singles in the seventh. Ortega was also thrown out in the inning by center fielder Lane Thomas trying to score on Ian Happ’s line drive.

Stroman labored through five innings, allowing four runs and five hits. The right-hander threw 90 pitches, struck out six and walked two following a string of strong starts. Stroman posted a 1.67 ERA in his previous five outings after missing a month because of inflammation in his right shoulder.

McGee signed with the Brewers on July 23, after he was released by San Francisco and posted a 6.35 ERA in six appearances. The left-hander was 32-27 with 79 saves and a 3.67 ERA over 13 seasons with Tampa Bay, Colorado, the Los Angeles Dodgers, San Francisco and Milwaukee.

Cubs: The Cubs remain unsure if RHP Kyle Hendricks (strained right shoulder) will pitch again this season. Though an MRI showed improvement, manager David Ross said there is still inflammation. Hendricks has not been throwing and will be reassessed in about a week. “I think my main thing is to get him back on the bump, throwing bullpens, and see how he feels,” Ross said. “I don’t think getting him back in games is a top priority for everyone. But if he is able to get to that space, I think that’s a win for everyone.”