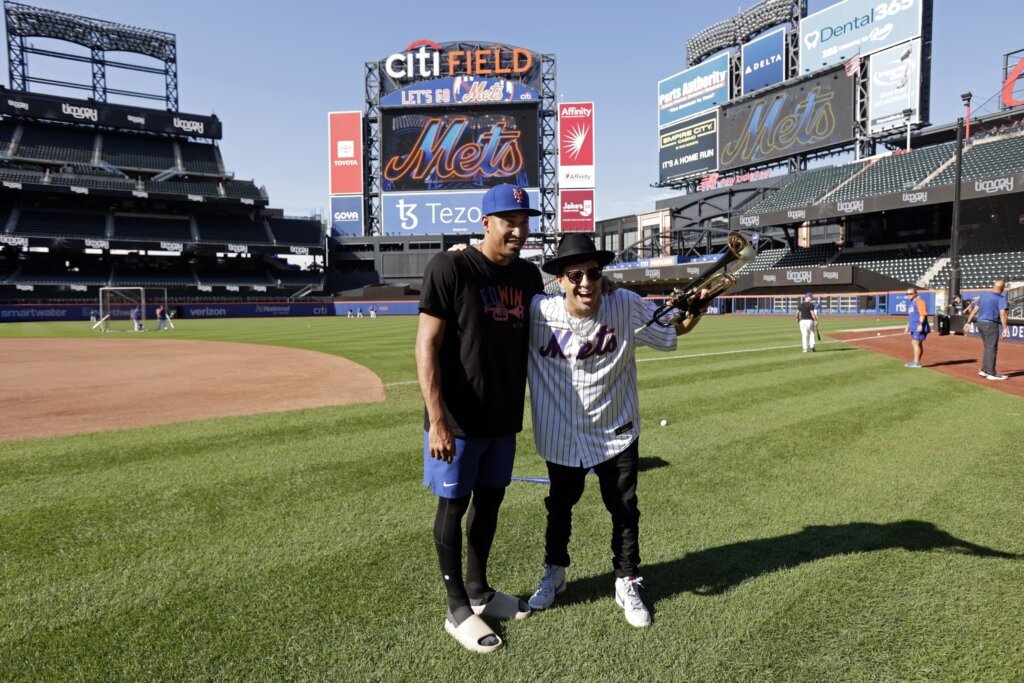 NEW YORK (AP) — Timmy Trumpet is hoping to horn in on this most notable season for the New York Mets.

The Australian-born musician was at Citi Field with trumpet in hand Tuesday night, ready if needed to pop onto the diamond and perform his song “Narco” live if Mets closer Edwin Diaz emerged from the bullpen.

“I guess I’ll be somewhere around here and I’ll probably just pull out the trumpet and then just play it,” he said, standing with Diaz next to the Mets dugout.

As if anyone needed a reminder a couple hours before the Mets hosted the Los Angeles Dodgers in a matchup of NL division leaders, Trumpet put the instrument to his lips and blared the instantly recognizable first notes of Diaz’s wildly popular entrance song.

A blown song, not a blown save in the empty ballpark.

“It’s actually really cool to be in a stadium where you can hear it echoing around like that. I’ve never been in a stadium this big before,” he said.

With the crowd applauding, the 40-year-old musician put on a jersey with Diaz’s No. 39 and the name Trumpet on the back and threw out the first ball, an arcing toss to Mets outfielder Tyler Naquin that barely reached the plate.

“I hope I come into the game tonight,” said Diaz, wearing a shirt with a blue-and-orange “Edwin” pictured above a trumpet. “Because he’ll perform for me and the fan base.”

Diaz actually began using “Narco” — which Trumpet recorded with the Dutch DJ duo Blasterjaxx in 2017 — during his final season with the Seattle Mariners in 2018. He pivoted to “No Hay Limite” by Miky Woodz upon being traded to the Mets prior to the 2019 season, when he posted a 5.59 ERA and blew seven saves.

He returned to “Narco” in 2020, when the Mets played to empty stadiums during the COVID-19 pandemic. But it took his dominance this season — Diaz is 3-1 with a 1.40 ERA, 28 saves and 99 strikeouts in 51 1/3 innings — to vault the song into the rarefied air of all-time closer entrance songs alongside the likes of “Enter Sandman” (for Mariano Rivera) and “Hells Bells” (for Trevor Hoffman).

The lights at Citi Field dim and the scoreboard goes dark as Diaz walks from the bullpen mound to the door. Upon his first step on to the field, the song starts and tens of thousands of people leap to their feet and begin clapping and miming trumpet actions as mascots Mr. and Mrs. Met pretend to play their own plastic trumpets.

“I think what I like most so far is the fans — the people in the crowd, watching the video of them reacting to the track that Diaz picks is just insane, they’re wild,” Trumpet said. “It looks like a huge party and that was the intention of this song when we wrote it in the first place. So it’s a huge honor.”

Manager Buck Showalter said earlier this month he delayed a trip to the bathroom to watch Diaz’s entrance. And his teammates have been among those sending “Narco” into the top five at Spotify, the Internet streaming service.

“We all get excited for it, too,” Mets reliever Adam Ottavino said. “For whatever reason — the simplicity of it, just with the trumpets and everything, people really respond to that. You can see why it’s spread. I found myself searching for the song on Spotify at some point.”

“It’s just pretty cool. The great ones have had iconic songs at times — Mariano and Trevor Hoffman, stuff like that — so this is really cool that he has that going,” he said.

Dodgers manager Dave Roberts, a longtime friend and teammate of Hoffman’s in San Diego, said his favorite entrance song remains “Hells Bells.” He said he was aware of the sensation “Narco” has become.

“Hopefully we don’t hear it over the next three days,” Roberts said with a grin. “Hopefully we can stand him up and he can just be here and not have to entertain tonight.”