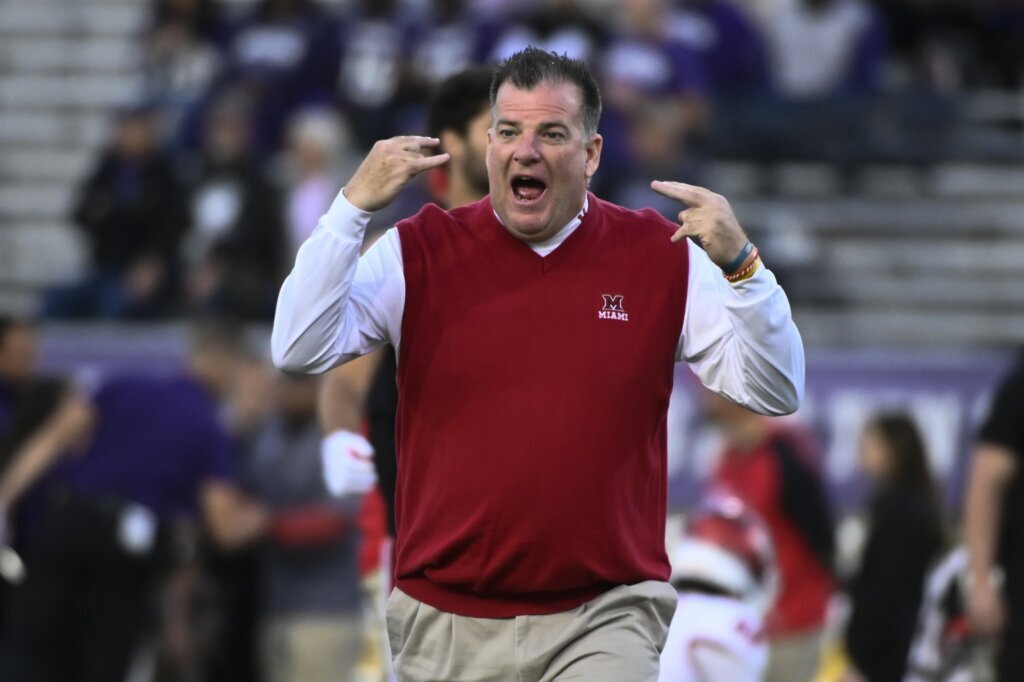 It was the first win for the RedHawks (2-2) against against a Big Ten team since it beat Northwestern 44-14 in 2003. Miami went 13-1 that year and was ranked No. 10 in the final AP poll with Ben Roethlisberger leading the way.

Nicholson had hit the upright on a previous field goal attempt and had another blocked. His game-winner capped a 13-play, 58-yard drive.

It was Northwestern’s (1-3) third straight loss and second shocking one at home, following a 31-24 loss to Southern Illinois last week.

Miami tied it at 14 with 7:23 left the fourth when quarterback Aveon Smith scored on a keeper. Keyon Mozee set up the touchdown after he broke free for a 66-yard run and reached the Northwestern 1 before being forced out of bounds.

Mozee led all rushers with 171 yards.

Cam Porter had barreled into the end zone from 2-yard line just 1 minute and 11 seconds earlier to put Northwestern ahead 14-7. Porter, who finished with 42 yards on seven carried, twisted in to the end zone up the middle to cap a 12-play, 58-yard drive.

Northwestern’s Ryan Hilinski passed for 232 yards and ran in the Wildcats first touchdown in the first quarter. The junior quarterback entered averaging 320 yards per game.

Smith hit Mac Hippenhammer with a 12-yard touchdown pass with 27 seconds left in the first half. Smith was limited to just 57 yard on 7-of-19 passing and the RedHawks gained 216 of their 273 total yards on the ground.

Northwestern running back Evan Hull, who went into the game averaging 217 all-purpose yards per game, was held to 62 rushing yards and 10 on receptions.

The team were tied 7 at the half.

Northwestern had 188 total yards in the before halftime and had a chance to take charge. But the Wildcats, hurt by turnovers in its their first three games were burned again in the second quarter of this one.

Hilinski punched into the end zone on a keeper from inside the 1 with 3:36 left in the first to put Northwestern up 6-0. It capped a 58-yard 10-play drive keyed by Hilinski’s 23-yard pass to Marshall Lang.

The Wildcats were marching to a second score, but Malik Washington fumbled at the Miami 24 1:05 into the second. Smith and Miami cobbled a 14-play 55-yard drive that ate up 7 minutes and 19 seconds — and was hindered by two offensive penalties.

Then Nicholson’s 38-yard field goal attempt bounced off the right upright and Miami stayed off the scoreboard.

The Wildcats weren’t so lucky after Miami’s Caiden Woullard blocked Luke Akers’ punt attempt from the Northwestern 35 with 1:20 left in the half.

Chris Cavalaris recovered and took the ball down to the 8. Two plays later, Smith hit Hippenhammer with a pass and Miami tied it.

Northwestern seemed on the march at the opening of the third quarter, but Jacob Gill couldn’t handle Hilinski’s pass at the 50.

The programs met for the first time since Northwestern’s 16-6 win in 2009.

Miami: The RedHawks won their fourth straight coin toss, but didn’t start quickly this time after scoring on game-opening possession in their first three games, including touchdowns at Kentucky and against Cincinnati. Like Northwestern, Miami was error-prone in this one, but eventually cashed in and got on the board after Woullard blocked Akers’ punt.

Northwestern: Turnovers, loose ball handling and a bad bounce or two haunted Northwestern again. In this one, Washington’s fumble changed the momentum of a game that seemed to be headed the Wildcats’ way. Earlier in the week, coach Pat Fitzgerald said his group was “inconsistent in execution and inconsistent in turnover ratio” and needed to be “cleaner as a team.” Northwestern still has plenty of work ahead of it.

Miami: The RedHawks open MAC play at Buffalo next week.

Northwestern: Visits No. 14 Penn State next week as it returns to Big Ten action.