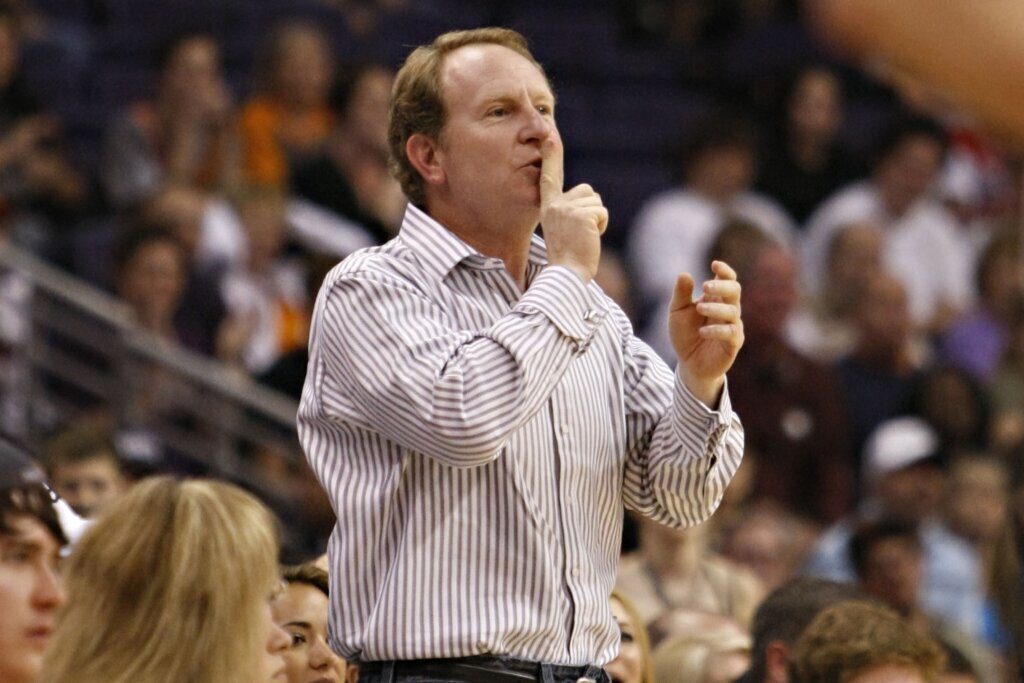 PHOENIX (AP) — All-Stars Devin Booker and Chris Paul, along with freshly paid Deandre Ayton and coach Monty Williams, are back together for another run at an elusive NBA title.

One man who apparently won’t be along on the journey — team owner Robert Sarver.

The Suns met in downtown Phoenix on Monday for media day, less than a week after the embattled Sarver announced his intention to sell the team. Sarver was suspended one year and fined $10 million on Sept. 13 by the NBA over workplace misconduct that included racist speech and hostile behavior toward employees.

Sarver’s intention to sell seemed to diffuse tensions on what could have been a very awkward day — and season — for the Suns.

“I think it was on its way to being a distraction,” Booker said. “But now that he’s chosen to sell the team, I think we can move forward, focus on the goal that’s at hand and that’s playing basketball.”

The Suns have been one of the NBA’s elite teams over the past two seasons. They made the Finals in 2021 before losing to the Milwaukee Bucks in six games. Last season, they set the franchise record for regular-season wins before a lopsided Game 7 loss to the Dallas Mavericks knocked them out of the playoffs in the second round.

Since then, there’s been drama. There was speculation Ayton was moving on to another team. There was chatter the Suns wanted to make a move to acquire star Kevin Durant in a trade with the Nets. There was the unhappiness of starting forward Jae Crowder, who won’t be with the team during training camp.

But nothing was as disruptive as the Sarver situation.

A 10-month investigation into Sarver’s behavior confirmed he had used racist language, made sexually inappropriate comments, left some employees — male and female — feeling uncomfortable with his words and actions, and took part in what would be considered workplace bullying.

Booker, Paul and Williams all said reading the final report was difficult.

“That’s called life,” Jones said. “I never forget that we’re playing the game of basketball. There’s a lot of things that go on in society and the day-to-day that people deal with that are much more stressful than the things we’re talking about in the context of sport.

“For us, it’s all about focus. We’re paid to be professionals, to be pros, to navigate these types of situations and still perform at a high level. I have no doubt my team will be able to do that.”

Ayton’s return to the organization was uncertain during the offseason, with the fifth-year forward eligible for a lucrative contract.

The Indiana Pacers made a max offer and the Suns matched it. Now he’s got a $133 million, four-year deal to remain with the organization that drafted him No. 1 overall.

“We were clear since Day 1 that we wanted Deandre here,” Jones said. “The unique thing about sport is whenever you start talking about contracts, a lot of noise happens. People attribute things to you that you didn’t say. I’m not on social media as much as many, but that’s what I call a ‘noise box’ where narratives start to go and people start to speculate.

“They speculated we did not want Deandre. But I think we were very proactive in matching (Indiana’s offer) and making sure that he stayed here in Phoenix.”

Cameron Payne was a key players for the Suns when they made their run to the Finals two years ago. He was also a big part of the team’s success during last year’s regular season, when they set the franchise record for wins.

But the backup guard fell out of favor during last year’s playoff run, losing his regular spot in the rotation.

It’ll be interesting to see what he does in his fourth season with the franchise. The 28-year-old averaged more than 10 points per game during the regular season last year.

It appears starting forward Jae Crowder won’t be back with the Suns despite being under contract for this season. The team has released a statement saying the veteran won’t be with the team when training camp opens Tuesday.

The Suns should be very similar in terms of the starting lineup, but the bench could look quite a bit different.

Guards Josh Okogie, Duane Washington Jr., Frank Jackson and forwards Damion Lee, Timothe Luwawu-Cabarrot and Jock Landale were all added during the offseason. The team also welcomes back forward Dario Saric, who missed all last season after tearing an ACL during the Finals in 2021.