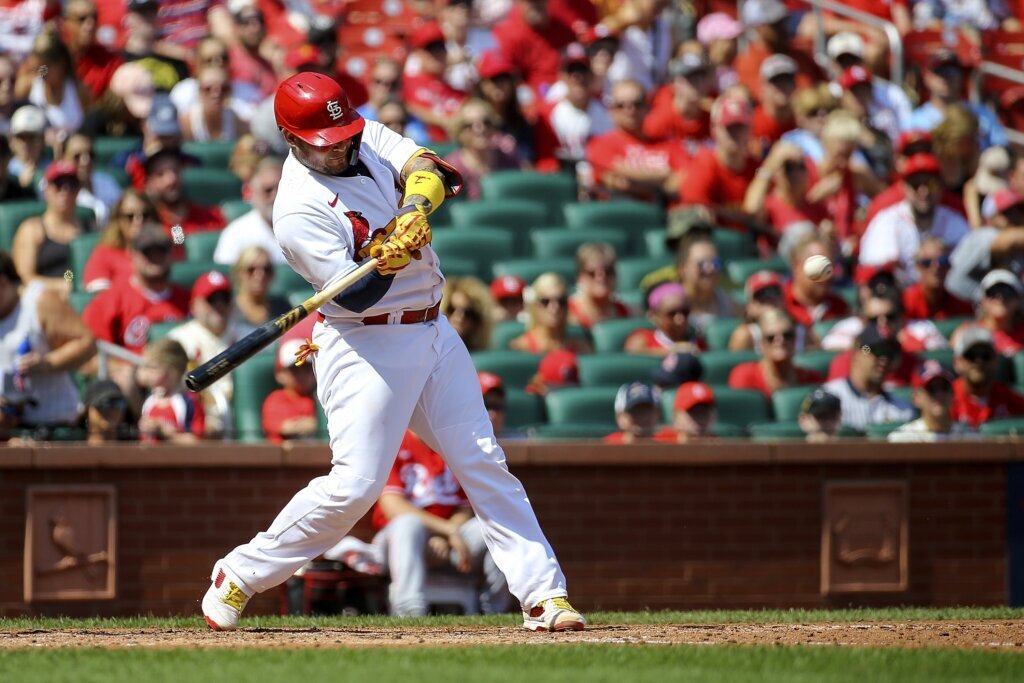 ST. LOUIS (AP) — Yadier Molina hit a two-run drive while Albert Pujols went hitless in his quest for 700 homers, and the St. Louis Cardinals beat the Cincinnati Reds 5-1 on Saturday in the first game of a doubleheader.

Pujols started at first base and hit second for the first time this season. He went 0 for 3 with two walks in his first two plate appearances. The sold-out crowd of 46,678 loudly booed both walks.

Tommy Edman had three hits for the NL Central-leading Cardinals. Paul Goldschmidt and Brendan Donovan each drove in a run.

The doubleheader was scheduled after a July 17 rainout. It is the sixth doubleheader for the Cardinals this season, and No. 5 for the Reds.

TJ Friedl hit an RBI double in the seventh to account for Cincinnati’s only run. Mike Minor (4-12) issued five walks in three innings and was charged with five runs and five hits.

The lowly Reds lost for the eight time in nine games.

St. Louis right-hander Dakota Hudson (8-7) pitched a career-high eight innings of six-hit ball in his first big league start since Aug. 30. He was optioned to Triple-A Memphis on Sept. 5.

The Cardinals jumped in front with two runs in the second. Edman singled in Donovan, and Goldschmidt drove in Molina with a bases-loaded walk.

Molina hit his fifth homer in the third, a drive to left that capped a three-run inning.

SATURDAY AT THE PARK

Reds: RHP Raynel Espinal was optioned to Triple-A Louisville. … RHP Kyle Dowdy was recalled from the taxi squad to serve as the 29th player for the doubleheader. He pitched four scoreless innings in his second big league appearance of the season.

Cardinals: Before Saturday’s first game, Hudson was added as the 29th player for the doubleheader.

Reds: RHP Hunter Greene (right shoulder strain) was reinstated from the 15-day injured list. He was slated to start the second game. … RHP Graham Ashcraft (right biceps soreness) is set for a second rehab outing for Triple-A Louisville on Monday.

Reds: Greene (4-12, 5.26 ERA) struck out 15 during three rehabilitation appearances for Triple-A Louisville. The rookie is 0-2 with a 5.40 ERA in three starts against the Cardinals this season.

Cardinals: LHP José Quintana (5-6, 3.34 ERA) has allowed two earned runs or fewer in all eight appearances for the Cardinals since arriving from the Pirates in a trade on Aug. 2.