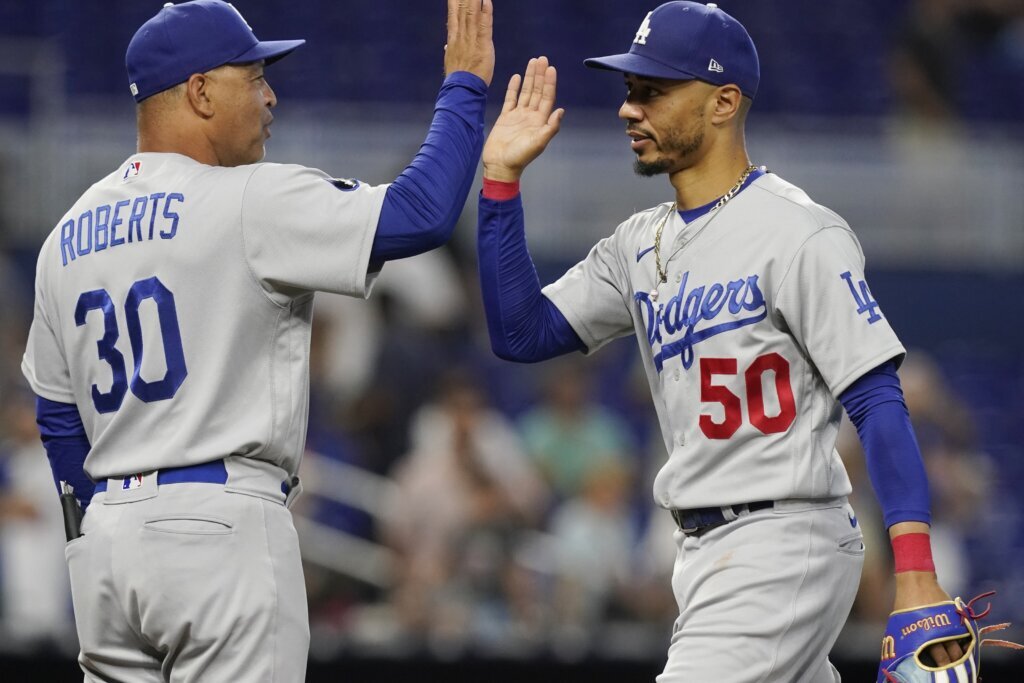 Justin Turner and Max Muncy had three hits apiece for the NL West-leading Dodgers, who are 28-8 since the All-Star break.

Betts, who also doubled and singled, homered for the fourth time in the series. The six-time All-Star went deep twice in Friday’s 10-6 victory, and then connected again in Saturday’s 2-1 loss to Sandy Alcantara and Miami.

Urías (14-7) allowed one hit — Brian Anderson’s sixth homer in the fourth — struck out seven and walked four. The left-hander has won 11 of his last 12 decisions.

The Dodgers jumped in front on Betts’ 31st homer and Turner’s RBI single in the first.

Edward Cabrera’s string of 22 2/3 scoreless innings ended when Betts drove his third pitch over the wall in center for his 36th career leadoff shot.

Trayce Thompson made it 3-0 when his leadoff drive in the second bounced off the foul pole in left for his seventh homer.

Cabrera (4-2) was lifted after 5 2/3 innings. The rookie right-hander gave up six runs and five hits.

Trea Turner was struck in the helmet by a 96-mph sinker from Cabrera in the fifth but stayed in the game. As soon as he reached first, Turner took off for second on Cabrera’s first pitch to Freddie Freeman and successfully stole his 21st base of the season.

Marlins: RHP Sixto Sánchez (right shoulder inflammation) will undergo an MRI on Monday. … OF Jorge Soler (low back spasms) hit in the cage Friday and showed no discomfort.