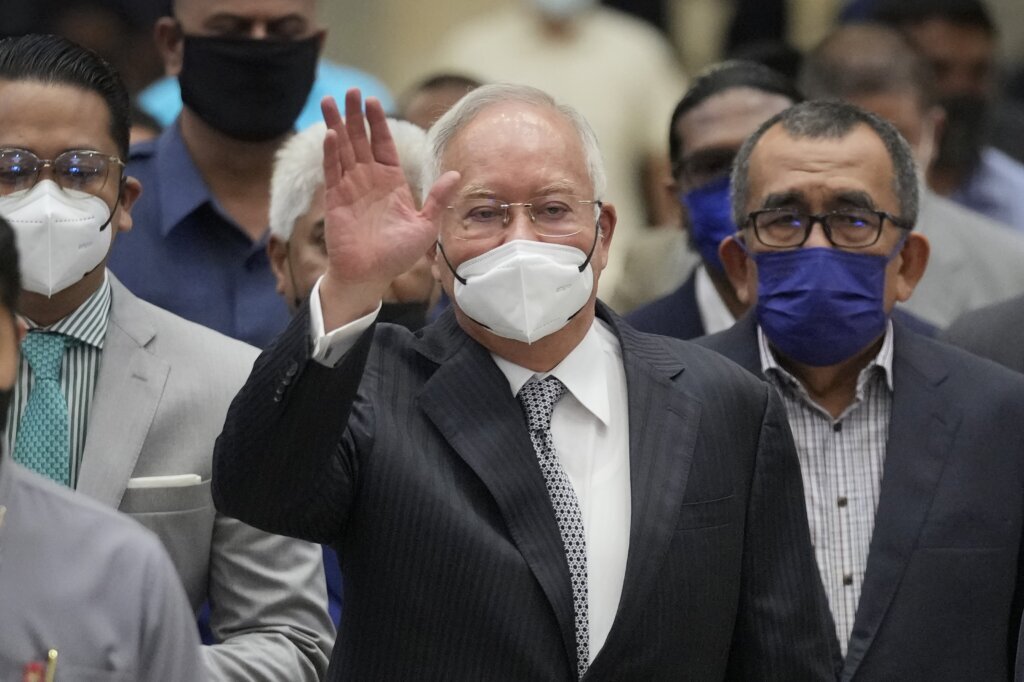 PUTRAJAYA, Malaysia (AP) — Former Prime Minister Najib Razak sought Tuesday to remove Malaysia’s top judge from the final appeal against his 12-year prison sentence in a graft case linked to the massive looting of the 1Malaysia Development Berhad state fund, saying she may not be impartial.

In a new twist, Najib said in his application that the husband of Chief Justice Maimun Tuan Mat, who is leading a five-member Federal Court bench, had been critical about his leadership over the 1MDB scandal.

In his affidavit read out in court his lawyer, Najib said Zamani Ibrahim had, in a Facebook post right after Najib’s ouster in 2018 general elections, concluded that Najib “had siphoned sovereign government funds” into his personal account. Najib said this was “highly disturbing” as it was likely that Zamani influenced Maimun’s view on his alleged culpability.

As such, the court’s findings may be seen as “tainted with bias, and the public perception of the independence of the judiciary will be in doubt,” Najib said in his application.

Prosecutors accused Najib of making the application in bad faith to delay the conclusion of his final appeal.

Najib, 69, would become Malaysia’s first former prime minister to be imprisoned if his appeal fails. He has maintained he is innocent and has been out on bail pending his appeals.

His latest move came after the Federal Court last week rebuffed several attempts by Najib to delay the hearing. It rejected his attempt to introduce new evidence that could spark a retrial on allegations of bias by the high court judge who sentenced him in 2020.

The court also refused to postpone the hearing for Najib’s newly appointed lawyers to prepare for the case. Najib’s new lead counsel, Hisyam Teh Poh Teik, then asked to withdraw himself as he wasn’t given time to prepare but the court denied his request.

Hisyam then said he would not make any new submissions in the appeal. Najib has protested that his right to a fair hearing was at stake as he was left with no effective counsel or proper representation in such a case.

The hearing then began Thursday. The prosecution ended their arguments Friday, and his defense is due to start Tuesday.

But at the start of the hearing, Hisyam told the Federal Court the defense has made an application to recuse Maimun and for a new panel to hear the appeal. He said there was a real danger of bias on Maimun’s part that would cause her not to be objective and impartial.

Maimun, Malaysia’s first female chief justice appointed in 2019, has come under attack on social media from Najib’s supporters. Police arrested a man over the weekend in connection with death threats made against Maimun. Hundreds of Najib’s supporters amassed outside the court in a show of support.

1MDB was a development fund Najib set up shortly after taking power in 2009. Investigators allege at least $4.5 billion was stolen from the fund and laundered by Najib’s associates. Najib was found guilty of abuse of power, criminal breach of trust and money laundering for illegally receiving $9.4 million from SRC International, a former unit of 1MDB.

The 1MDB scandal sparked investigations in the U.S. and several other countries and caused the downfall of Najib’s government in 2018 elections. Najib faces a total of 42 charges in five separate trials linked to 1MDB, and his wife is also on trial on corruption charges.

Still, Najib remains politically influential. His United Malays National Organization leads the current government after defections of lawmakers caused the collapse of the reformist government that won the 2018 polls.

ENG vs SA: Ben Stokes Reveals His Mental Battle On Dealing With His Father’s Death