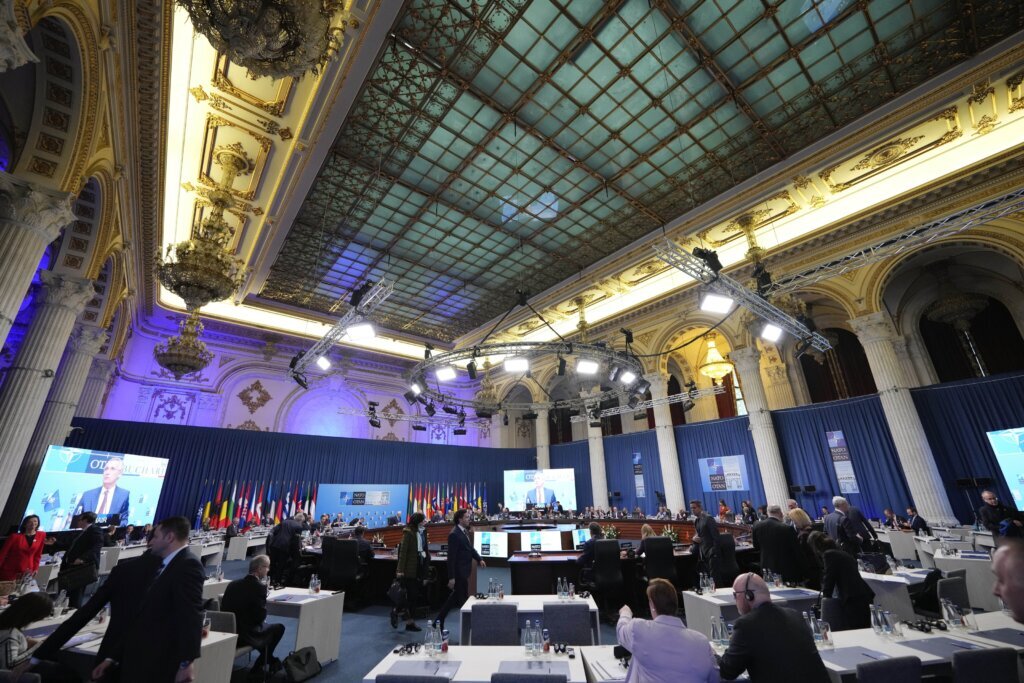 BUCHAREST (AP) — NATO turned its attention on Wednesday to three countries shaken by Russia’s invasion of Ukraine — Bosnia, Georgia and Moldova — as the military alliance struggles to extend its security umbrella across Europe.

At talks in Romania, the foreign ministers of the three countries met with their NATO counterparts to discuss ways that the world’s biggest security organization might be able to help, as the war in Ukraine exposes them to political, energy and territorial uncertainty.

While the cause of the problems facing Bosnia, Georgia, and Moldova is clear, their needs and the way that NATO might be able to help them are not. No straightforward proposals about what might be done were offered by NATO ministers as they arrived at the Palace of the Parliament in the capital Bucharest.

Dutch Foreign Minister Wopke Hoekstra said the meeting is aimed at ensuring “more safety and security on the European continent,” and “is a signal … on how important it is to create stability not only for NATO countries itself, but also beyond.”

Czech Foreign Minister Jan Lipavsky told reporters that it was important not to let a “gray zone be here, to be taken over by other forces.”

Bosnia has long been wracked by political instability, but protests rocked the Bosnian Serb half of the ethnically divided country last month after some voters alleged that a pro-Russian Bosnian Serb leader rigged an election in the Serb entity, Republika Srpska.

Bosnian Foreign Minister Bisera Turkovic said her country, where a government is in the process of being formed following the elections, “is very concerned about the future.”

“We have proxies, or we had the proxies, in our government, Russian proxies. So division in the country is deep and we hope that we will be able to overcome it. NATO’s presence is extremely important for Bosnia-Herzegovina because it is a guarantor of our security,” she said.

NATO has promised Georgia that, like Ukraine, it will join the 30-nation alliance one day, but Russian troops swept into Georgia after that pledge was made 14 years ago. A breakaway Georgian region has this year threatened to hold a referendum on joining Russia.

Russia’s war in Ukraine has had a troubling effect on Moldova, which is currently facing a severe energy crisis due to its reliance on Russian energy.

In recent weeks it has suffered massive power outages as a result of Russian strikes on Ukraine’s energy grid. Russian missiles have also traversed its skies, and in April blasts occurred in the country’s Russian-backed breakaway region of Transnistria — where Moscow bases around 1,500 troops.

Things are moving more positively in other parts of Europe. Swedish Foreign Minister Tobias Billstrom said that he and his counterparts from Finland and Turkey had held “a very good” meeting aimed at unblocking Turkish opposition to his country joining NATO.

Billstrom said that he plans to travel to Ankara soon for further talks. NATO is eager to add the two Nordic nations to its ranks. They applied to join in April, amid concern that Russia might target them next. Turkey and Hungary are the holdouts on ratifying their applications. The 28 other member nations have already done so.