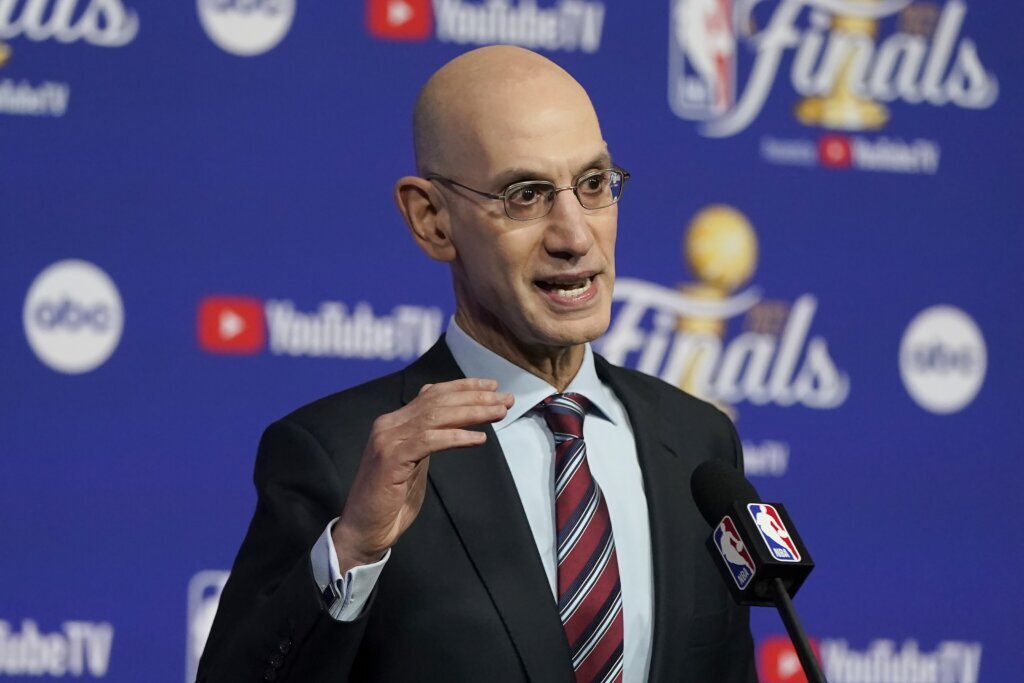 NEW YORK (AP) — Phoenix Suns owner Robert Sarver was likely spared even stronger sanctioning by the NBA for his racist, misogynistic and hostile words and actions because of one key conclusion by investigators, Commissioner Adam Silver said Wednesday.

The law firm that spent nearly a year digging into the situation determined Sarver’s use of slurs “was not motivated by racial animus.”

Had that not been the case, Silver indicated, Sarver’s punishment — a one-year suspension and $10 million fine — would have been far more severe.

“It was relevant,” Silver said after the league’s Board of Governors meetings concluded. “I think if they had made findings that, in fact, his conduct was motivated by racial animus, absolutely that would have had an impact on on the ultimate outcome here. But that’s not what they found.”

And that, to Silver, is one of the key distinctions between the Sarver case and the one surrounding then-Los Angeles Clippers owner Donald Sterling in 2014, when he was banned for life and fined $2.5 million for racist comments.

Some players, Silver said, have reached out to him to voice concerns. Silver said he would keep the details of those conversations private.

But LeBron James — obviously, one of the league’s most prominent player voices ever — took his concerns public Wednesday night, tweeting that the NBA did not go far enough with Sarver.

“I gotta be honest…Our league definitely got this wrong,” James tweeted to his 52 million followers. “I don’t need to explain why. Y’all read the stories and decide for yourself. I said it before and I’m gonna say it again, there is no place in this league for that kind of behavior.

“I love this league and I deeply respect our leadership. But this isn’t right. There is no place for misogyny, sexism, and racism in any work place. Don’t matter if you own the team or play for the team. We hold our league up as an example of our values and this aint it,” he wrote.

“Like many others, I reviewed the report,” Paul wrote on social media. “I was and am horrified and disappointed by what I read. This conduct especially towards women is unacceptable and must never be repeated. … I am of the view that the sanctions fell short in truly addressing what we can all agree was atrocious behavior. My heart goes out to all of the people that were affected.”

The NBA had the option of giving Sarver a longer ban than the one-year suspension. The $10 million fine was the maximum allowable, as was the case with Sterling’s $2.5 million fine eight years ago; NBA rules on maximum fines were changed in 2019.

Another reason Silver, who was the ultimate decider of the penalty in this case, stopped short of suspending Sarver for longer or even banning him: He said he took into account a number of anonymous details that could not be revealed in the investigative report that was published Tuesday, along with other elements of Sarver’s actions in his 18 years owning the Suns and the WNBA’s Phoenix Mercury.

“There were these terrible things,” Silver said. “There are also many, many people with very positive things to say about him through this process. And ultimately, I took all of that into account in making the decision that the one-year suspension plus the fine was appropriate.”

A 10-month investigation into Sarver’s behavior confirmed he had used racist language, made sexually inappropriate comments, left some employees — male and female — feeling uncomfortable with his words and actions, and took part in what would be considered workplace bullying.

But the league did not have discussions about removing Sarver as owner during the Board of Governors meetings. Silver permanently banned Sterling after tapes of him making racist comments were leaked to TMZ in a move that started the process of Sterling being forced to sell the franchise.

“This case is very different,” Silver said. “It’s not that one was captured on tape and the other isn’t. … Mr. Sarver ultimately acknowledged his behavior.”

Sarver did, and issued an apology Tuesday, though noted he did not agree with all of the report’s findings.

Silver was asked about how most employees of any company would likely face firings if they were to use racial slurs or partake in lewd actions or comments in the way that the investigation showed that Sarver did.

“It’s hard to make those comparisons to somebody who commits an inappropriate act in the workplace in somewhat of an anonymous fashion versus what is a huge public issue now around this person,” Silver said. “There’s no neat answer here, other than the rights that come with owning an NBA team, how that is set up within our Constitution. What it would take to remove that team from his control is a very involved process, and it’s different than holding a job. It just is. When you actually own a team, it’s just a very different proposition.”

A difference between the Sterling and Sarver cases is this: Sarver cooperated with the league’s investigation and Sterling, in many ways, did not. Sterling wound up suing the NBA for $1 billion in federal court after his lifetime ban was announced, saying his constitutional rights were violated.

The report said Sarver “repeated or purported to repeat the N-word on at least five occasions spanning his tenure with the Suns.”

“However, the investigation does not find that Sarver’s conduct in any of these instances was motivated by racial animus,” the report read, adding that investigators made “no finding that Sarver used this racially insensitive language with the intent to demean or denigrate.”

The Sterling investigation — from when the audio tapes of him making racist remarks to a girlfriend were released, to Silver’s announcement of the lifetime ban — took three days. The Sarver probe took 100 times longer, involved more than 320 interviews and the review of more than 80,000 documents and other materials.

Both investigations were handled by the same New York-based firm of Wachtell, Lipton, Rosen and Katz. Attorney David Anders led both probes.

Sarver will be welcomed back in 2023, though Silver made clear that his words and actions going forward will be highly scrutinized.

“I don’t have the right to take away his team,” Silver said. “I don’t want to rest on that legal point because of course there could be a process to take away someone’s team in this league. It’s very involved, and I ultimately made the decision that it didn’t rise to that level. But to me, the consequences are severe here on Mr. Sarver.”

Sarver’s punishment is also similar to others levied in past high-profile examples of wrongdoing, either words, actions or both.

In 1993, then-Cincinnati Reds owner Marge Schott was fined $25,000 and suspended one year for making “racially and ethnically offensive remarks.” And last year, the NFL fined the Washington Commanders $10 million, plus investigative fees, after a probe found the team’s workplace environment for women was, in the words of Commissioner Roger Goodell, “highly unprofessional” — but stopped short of suspending owner Daniel Snyder.