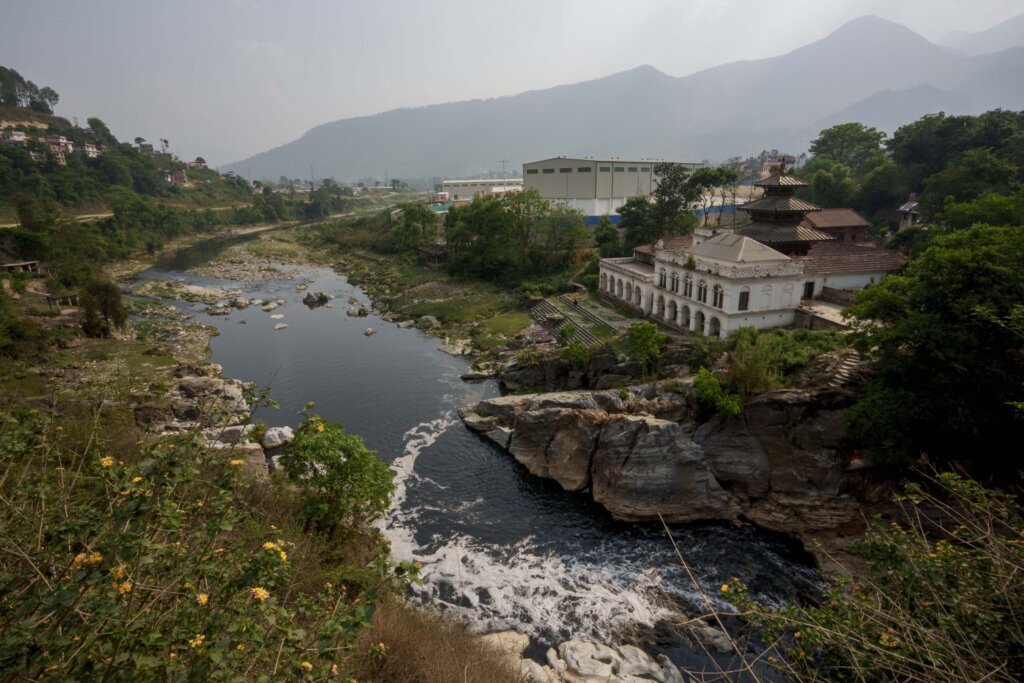 KATHMANDU, Nepal (AP) — High on a mountain in the Himalayas, pristine drops fall from the mouth of a tiger…

KATHMANDU, Nepal (AP) — High on a mountain in the Himalayas, pristine drops fall from the mouth of a tiger statue installed at a stream thought to form the headwaters of the Bagmati River, long revered as having the power to purify souls. From there it wends its way downhill past verdant forests and merges with other waterways, irrigating fields of rice, vegetables and other crops that are a livelihood for many Nepalese.

But as the Bagmati reaches the valley of Kathmandu, the capital, its color changes from clear to brown and then to black, choked with debris, its contents undrinkable and unsuitable even for cleaning. During the dry season, an overwhelming stench pervades the area by its banks.

Tainted by garbage and raw sewage that is dumped directly into the waterway, Nepal’s holiest river has deteriorated so greatly that today it is also the country’s most polluted, dramatically altering how the city of about 3 million interacts with the Bagmati on daily, cultural and spiritual levels.

In the capital, the Bagmati’s sludge oozes past several sacred sites, including the Pashupatinath Temple, declared a World Heritage Site by UNESCO in 1979. The sprawling complex comprises a golden-roofed main temple dedicated to the Hindu god Shiva, surrounded by hundreds of smaller ones.

Hindus flock to the riverbanks in Kathmandu to worship at shrines and celebrate festivals. Women dip in the river to wash away sins during Rishipanchami, a day for worship of the seven sages revered as enlightened beings guiding humanity through the ages. Visitors also wade in during the festival of Chhath, praying to the sun god Surya. During Teej, married women come to pray for the health and prosperity of their husbands, and single women, to find a good one.

Families have long carried the bodies of deceased loved ones to these banks to wash the feet of the dead on a stone slab and sprinkle their faces with river water. Beliefs hold that that washes away a person’s sins and sends their soul to heaven before their physical remains are cremated atop heaps of wood, also alongside the river, and their ashes scattered into the waters.

People still bring departed loved ones to the Bagmati, but many no longer dare to have any contact with its contents. While the bodies are still cremated here, they’re cleansed with purified water bought in nearby stores.

“That is no more now. The water is so dirty and stinks. People are forced to bring bottled water and do the rituals,” 59-year-old Mithu Lama, who has been working with her husband at the Teku ghat cremation grounds since she married him at age 15, said on a recent day as she stacked wood for a funeral pyre.

Grieving families who resort to bottled water typically are loath to discuss it openly, for having failed to follow the sacred funeral tradition.

People have also traditionally collected river water to sprinkle on their homes to purify them. The river is significant to Buddhists, too, many of whom cremate bodies on the Bagmati’s banks.

Born and raised next to the Bagmati, Lama recalled using its waters for cooking, bathing, washing and even drinking. Today that feels like a long-ago dream dashed by decades of dumping human waste and refuse, and one she doesn’t expect to see again anytime soon.

“I now have serious doubt that it will be cleaned in my lifetime,” Lama said. “Not that there has not been any efforts, there have been several cleaning campaigns, but there are more people dirtying it. People are the problem.”

Indeed, there have been efforts by both private volunteers and the government to clean up the river. Among those initiatives, every Saturday for the past seven years hundreds of volunteers have gathered in Kathmandu to pick up garbage and remove trash from the Bagmati.

There almost every weekend is Mala Kharel, an executive member of the governmental High Powered Committee for Integrated Development of the Bagmati Civilization, which was set up to help clean up the river. She volunteers her time not only for cleanup duty but to raise awareness among the population about avoiding pollution.

Kharel said that over the years the campaign has succeeded in collecting about 80% of garbage along the riverbank, recovering all sorts of refuse from decaying animals to even, shockingly, the bodies of dead babies dumped there. But the pickup efforts admittedly fall short of perfection, in part since frequent disruptions to trash collection services encourage more dumping than they can keep up with.

In addition, many thousands of people have built huts, shacks and brick homes illegally along the river and refuse to leave.

As for the sewage, according to Kharel, the committee is working on several projects including the construction of canals and pipes, built parallel to the river, to connect to sewer lines and prevent their waste from reaching the Bagmati. It also is considering a treatment plant, and working on upstream dams where rainwater can be captured and stored during the monsoon season and released during the dry months to flush the river, moving the waste downstream from Kathmandu.

Work on the pipe and canal system began around 2013, but no completion date has been announced. Construction on two dams is ongoing — but said to be near done — while another remains in the process of getting started. But campaigners have high hopes for the near term.

“In the next 10 years, I am hoping the river will be flowing clear and the banks will be clean and lined with trees,” Kharel said. “We are working hard with this target.”

That optimism isn’t shared by everyone. Some environmentalists aren’t sure the dams, for instance, will be of much help.

“There is too much expectations from these dams. Bagmati is a natural river and not a canal that can be cleaned so easily,” said Madhukar Upadhya, a watershed expert who studies the river closely and said its bed no longer has any sand left.

Instead, today it’s lined with clay and mixed with chemicals dumped by industrial activity such as handwoven carpet makers, popular in the 1990s but now banned from the capital.

“So much damage has already been done to it,” Upadhya said, “that it can perhaps be cleaned to some degree but not restored to its past glory.”

Hindu priest Pandit Shivahari Subedi, who has spent three decades on the stone steps between the Bagmati and the Pashupatinath Temple performing rituals for devotees, takes a similarly dim view of the various cleanup campaigns he has seen. Divine intervention, he believes, is needed.

“There have been too many assurances from political leaders and top people, but they have all not been fulfilled. … It looks like unless the gods create some kind of miracle, the Bagmati will not return to its glory,” Subedi said. “To clean the water naturally, by the grace of god, there needs to be huge flooding of water flushing the dirt.”

Associated Press religion coverage receives support through the AP’s collaboration with The Conversation US, with funding from Lilly Endowment Inc. The AP is solely responsible for this content.