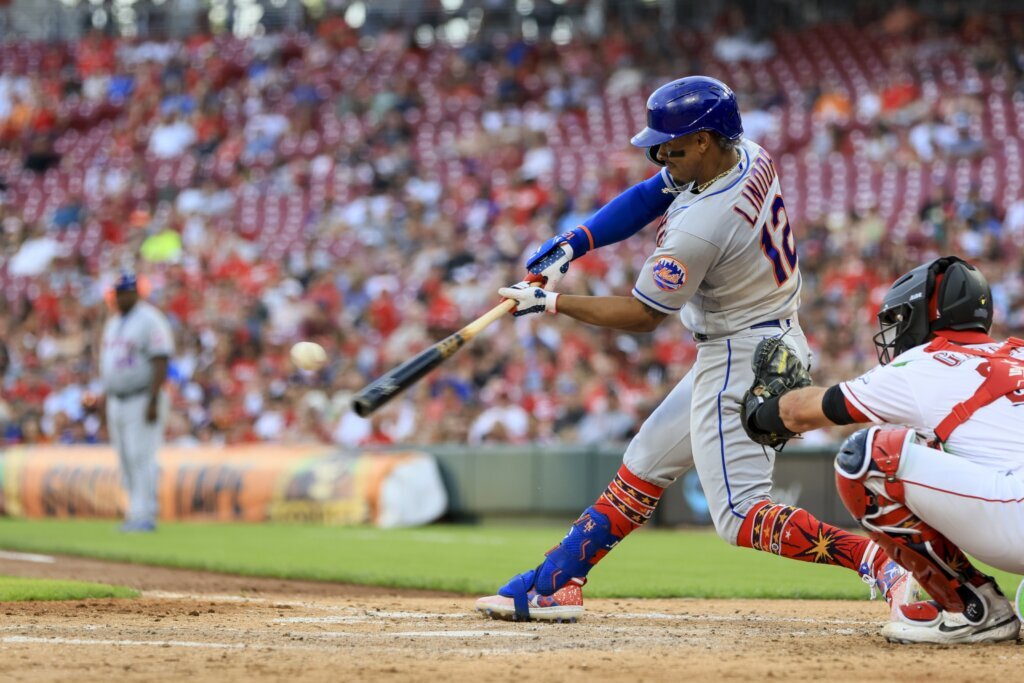 Taijuan Walker (7-2) struck out nine in six innings as NL East-leading New York earned its second straight win after a stretch of four losses in five games. The Mets improved to 50-30, and ace right-hander Max Scherzer returns Tuesday night after being sidelined by a strained left oblique muscle.

“With Max coming back right at the halfway point, that’s a good sign,” Nimmo said. “I’d say given what’s happened in the first half of the season, we’d be pretty happy if you told us at the beginning of the year we’d be at 50 wins at this point. We’ve had a good first half.”

Nick Senzel and Brandon Drury homered for last-place Cincinnati, which lost for the fifth time in six games.

The Mets got some good swings against hard-throwing rookie Hunter Greene.

Nimmo hit a towering three-run drive in the second. The Mets are 39-9 this season when scoring first.

“I was able to capitalize on a couple of sliders that he left in the middle of the plate,” Nimmo said. “Glad I was able to help with the win tonight.”

In the third, Drury drove an 0-1 pitch from Walker deep to right for a tying three-run shot. The opposite-field homer was Drury’s career-best 17th. He was with the Mets last season, but only had 84 at-bats.

It was a rare mistake for Walker, who is making a case for a spot on the NL All-Star team.

“It was hot, so definitely tired,” Walker said. “The offense picked me up after I gave up the three-run home run. I was able to settle in. My splitter wasn’t very good today, but I was able to get my slider going.”

Lindor put the Mets ahead with his 14th homer, a solo drive on a 99-mph pitch from Greene in the fifth. It was the major league-leading 22nd homer allowed by Greene (3-10) this season.

“We were trying to go outside on Lindor and it leaked back to the middle and he got it,” Greene said. “On the previous home run, I threw it right into his bat path. It was a poor slider.”

Dominic Smith’s two-run double off Reiver Sanmartin in the sixth handed the Mets a three-run cushion.

Walker was charged with three runs and four hits. Seth Lugo pitched the ninth for his third save.

The game-time temperature was 91 degrees.

It was win No. 1,601 for Showalter. He is one victory shy of Fred Clarke for 21st on the career list. Showalter ranks fourth among active managers.

Mets: RHP Jacob deGrom (stress reaction in right scapula) is slated to make his second minor league rehab start on Friday. He is not expected to return to the Mets’ rotation until after the All-Star break. … LHP David Peterson is expected to come off the paternity list to start Wednesday’s series finale in Cincinnati.

Reds: RHP Art Warren was placed on the IL with a right flexor pronator strain. C Mark Kolozsvary was recalled. … C Tyler Stephenson began a rehab assignment at Triple-A Louisville and caught five innings while going 1 for 2 at the plate. Stephenson broke his right thumb June 9 on a foul tip.

Scherzer (5-1, 2.54 ERA) makes his first start for the Mets since leaving his outing on May 18 against St. Louis with a right oblique strain. Scherzer’s 1.84 ERA against the Reds is tied for the ninth-lowest mark among all pitchers with at least 50 innings pitched against an opponent. Reds rookie LHP Nick Lodolo (1-2, 5.52 ERA) starts for the first time since suffering a lower back strain in April.

Fiem Industries surges 6% on healthy outlook, stock up 56% in one month