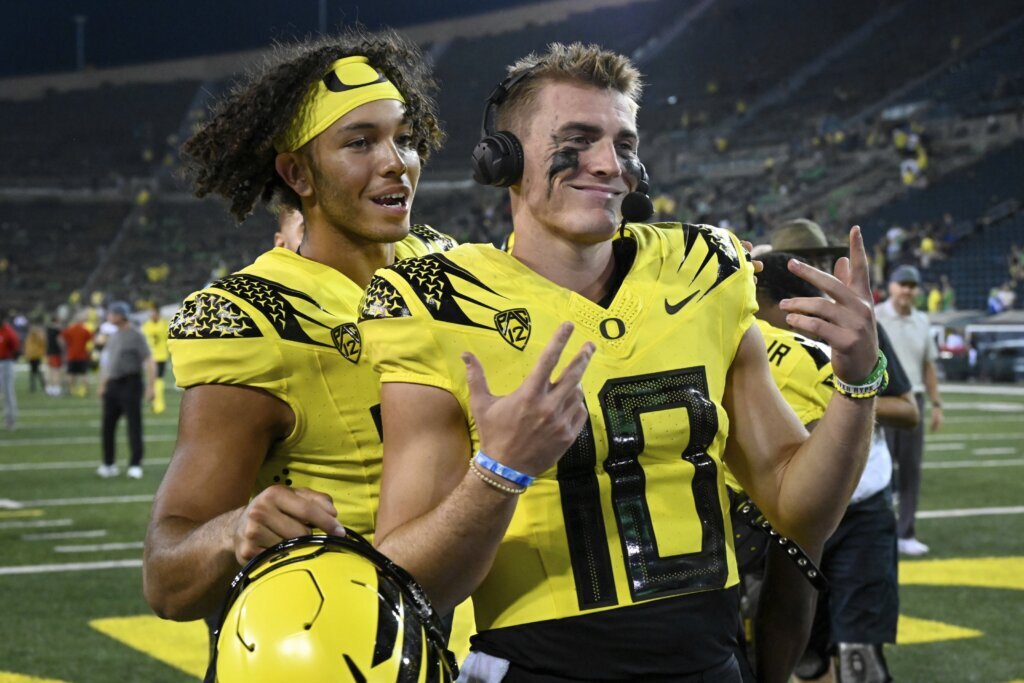 Line: Oregon by 3 1/2, according to FanDuel Sportsbook.

BYU is playing its final season as an independent and is set to join the Big 12 next season. The No. 12 Cougars are coming off a 26-20 double-overtime victory over Baylor last weekend. Under head coach Kalani Sitake, BYU is 20-5 as a ranked team. Against ranked opponents under Sitake, the Cougars are 7-9. The No. 25 Ducks rebounded after a season-opening loss to Georgia with a 70-14 trouncing of Eastern Washington last weekend. The win also put the Ducks back into the AP Top 25. Oregon has won 20 straight games at Autzen Stadium, third-longest streak in the nation. The Ducks have also won 29 straight nonconference games at home.

BYU quarterback Jaren Hall against Oregon’s defense. Hall is 7-1 against Power 5 teams when he starts. He has six straight games passing for 250 yards or more, dating back to last season. Oregon’s D held Eastern Washington to just 87 passing yards, the first time the Ducks have kept an opponent under 100 since 2017 at Wyoming.

BYU: Receiver Chase Roberts caught eight passes for 122 yards and a touchdown against Baylor, becoming the first BYU freshman with over 100 yards receiving in a game since Cody Hoffman in 2010. Roberts was pressed into duty because of injuries to receivers Gunner Romney and Puka Nacua. Both Romney and Nacua could be back this weekend.

Oregon: Quarterback Bo Nix threw for 277 yards and a career-high five touchdowns against Eastern Washington. He completed his first 10 passes. Nix transferred from Auburn to Oregon in the offseason.

Oregon’s 70 points against Eastern Washington were the fifth most that the team has scored at Autzen. … The Ducks’ offense had a school-record 40 first downs against the Eagles. … Oregon has 53 freshmen on its roster, playing four true freshmen in the opener against Georgia and 10 against Eastern Washington. … BYU has seven sets of brothers on its roster. … Cougars starting offensive tackle Kingsley Suamataia is a transfer from Oregon. He played one game for the Ducks last year as a freshman. “He’s looking forward to this matchup, but I don’t think he has any ill feelings. He’s a kid that shows a lot of gratitude and humility,” Sitake said. … It’s the first matchup between two ranked teams at Autzen since 2018. … The Cougars went 5-0 against the Pac-12 last season.