Northwestern rallies past Nebraska 31-28 in opener in Dublin 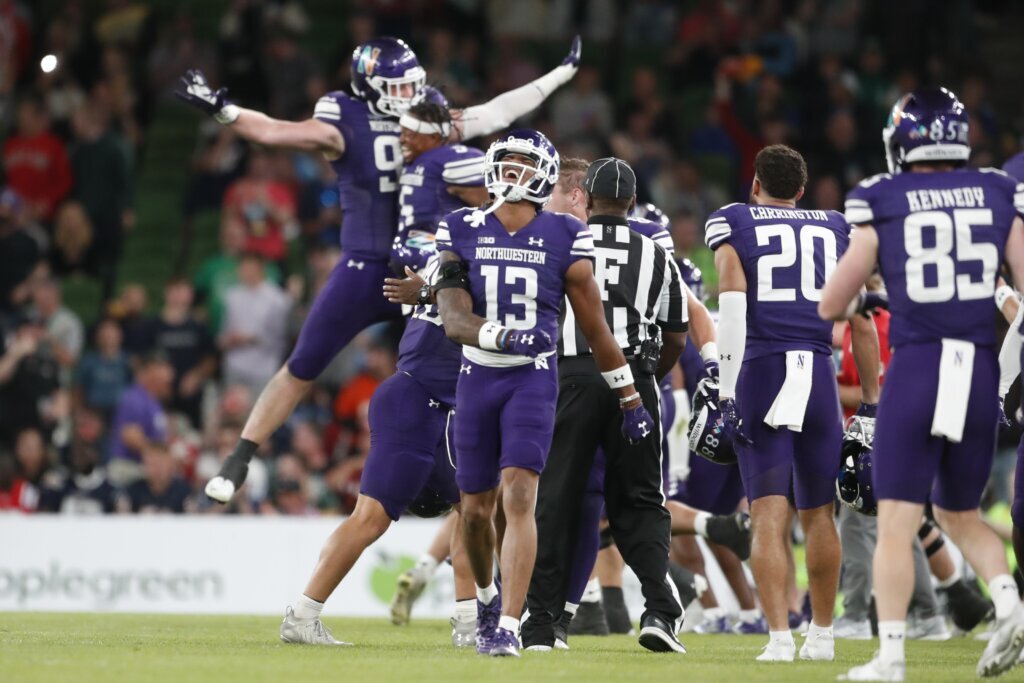 DUBLIN (AP) — Ryan Hilinski threw for 313 yards and two touchdowns to help Northwestern rally for a 31-28 victory over Nebraska in Saturday’s season opener in Ireland.

Northwestern handed the Cornhuskers their seventh consecutive loss going back to last season and added more pressure on embattled coach Scott Frost, who took the blame for a failed onside kick that changed the momentum of the game in the third quarter.

The Wildcats (1-0, 1-0 Big Ten) finished with 527 yards and gained a measure of revenge after their humiliating 56-7 loss to the Huskers last October. Nebraska hasn’t won since then.

Nebraska (0-1, 0-1 Big Ten) was looking for a bounce-back season with a revamped offense following a 3-9 season, but the team and its many fans who made the trip are headed home bitterly disappointed.

Quarterback Casey Thompson had a big game in his Huskers debut, throwing for 355 yards, but a fourth-quarter mistake was costly. Cameron Mitchell intercepted Thompson’s pass and returned it almost 40 yards. Six plays later, Evan Hull ran it in from the 4 to give the Wildcats a 31-28 lead. Hull finished with 22 carries for 119 yards.

Xander Mueller picked off a pass that bounced off receiver Wyatt Liewer’s hands with 1:27 to play and the Wildcats sealed the win.

Anthony Grant rushed for two third-quarter scores, including a 46-yarder to put the Huskers ahead 28-17. He ran it in from 3 yards on the previous drive to get Nebraska in front after the Wildcats went into halftime with a 17-14 lead. Grant had 19 carries for 101 yards.

The Huskers had built a 14-3 lead after Thompson threw a 32-yard touchdown pass to fellow transfer Isaiah Garcia-Castaneda and then punched it in from 1 early in the second quarter. Garcia-Castaneda finished with 120 yards on four receptions.

But Hilinski capped a terrific first half by finding Donny Navarro at the back of the end zone for a 6-yard scoring strike to give the Wildcats a 17-14 lead with 25 seconds left in the half.

Earlier, Hilinski hit a wide-open Raymond Niro III on a play-action pass for a 41-yard score.

After Niro’s touchdown, Nebraska was driving again when linebacker Greyson Metz ripped the ball from Garcia-Castaneda after a 24-yard completion to the Northwestern 11- yard line.

Northwestern: The Wildcats look as if they’ve found a quarterback in Hilinski, who completed 27 of 38 passes.

Nebraska: More questions for Frost. The Huskers lost all their games by single digits last season, and now another one. Despite the two interceptions, Thompson made big plays. On their first scoring drive of the third quarter, he scrambled left on a third-and-8 and heaved a pass to Garcia-Castaneda for a 58-yard gain.

Concession stands gave out free beer at one point during the game when they lost the internet connection at the stadium. Aviva Stadium is cashless, to they opted to not turn away thirsty fans. Ronan McGowan said he waited 40 minutes in long lines and missed portions of the game: “They did the right thing.”

Nebraska hosts North Dakota on Saturday in the first of four consecutive home games, including a matchup with Oklahoma on Sept. 17.

Northwestern is off next weekend and hosts Duke on Sept. 10 in the first of three straight games at Ryan Field.