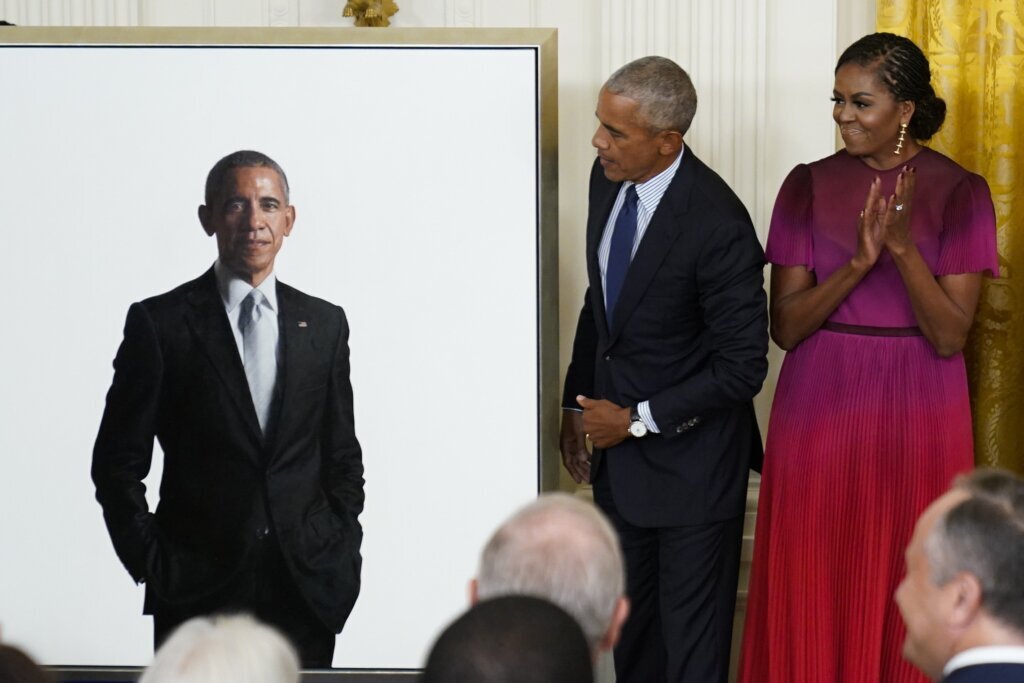 Former President Barack Obama and his wife Michelle returned to the White House on Wednesday for the unveiling of official portraits with a modern vibe: him standing expressionless against a white background and her seated on a sofa in the Red Room wearing a formal light blue dress.

WASHINGTON (AP) — Former President Barack Obama and his wife, Michelle, returned to the White House Wednesday, unveiling official portraits with a modern vibe in an event that set humor and nostalgia over his presidency against the current harsh political talk about the survival of democracy.

While her husband cracked a few jokes about his gray hair, big ears and clothes in his portrait, Mrs. Obama, a descendant of slaves, said the occasion for her was more about the promise of America for people like herself.

Biden, who was Obama’s vice president, praised his former boss’ leadership on health care, the economy and immigration and said nothing could have prepared him any better for being president than serving with Obama for those eight years.

“It was always about doing what was right,” he said.

The portrait of Obama, America’s 44th and first Black president, doesn’t look like any of his predecessors, nor does Michelle Obama’s look like any of the women who filled the role before her.

Obama stands expressionless against a white background, wearing a black suit and gray tie in the portrait by Robert McCurdy that looks more like a large photograph than an oil-on-canvas portrait. The former first lady, her lips pursed, is seated on a sofa in the Red Room in a strapless, light blue dress. She chose artist Sharon Sprung for her portrait.

Scores of former members of Obama’s administration were on hand for the big reveal.

Obama noted that some of them in the East Room audience had started families in the intervening years and feigned disappointment “that I haven’t heard of anyone naming a kid Barack or Michelle.”

He thanked McCurdy for his work, joking that the artist, who is known for his paintings of public figures from Nelson Mandela to the Dalai Lama, had ignored his pleas for fewer gray hairs and smaller ears. “He also talked me out of wearing a tan suit, by the way,” Obama quipped, referring to a widely panned appearance as president in the unflattering suit.

Obama went on to say his wife was the “best thing about living in the White House,” and he thanked Sprung for “capturing everything I love about Michelle, her grace, her intelligence — and the fact that she’s fine.”

Michelle Obama, when it was her turn, laughingly opened by saying she had to thank her husband for “such spicy remarks.” To which he retorted, by way of explanation, “I’m not running again.”

Then the former first lady turned serious, drawing a connection between unveiling the portraits and America’s promise for people with backgrounds like her own, a daughter of working-class parents from the South Side of Chicago.

Mrs. Obama said the portraits are a “reminder that there’s a place for everyone in this country.”

Tradition holds that the sitting president invites his immediate predecessor back to the White House to unveil his portrait, but Donald Trump broke with that custom and did not host Obama. So, Biden scheduled a ceremony for his former boss.

Mrs. Obama said the tradition matters “not just for those of us who hold these positions, but for everyone participating in and watching our democracy.”

In remarks that never mentioned Trump but made a point as he continues to challenge his 2020 reelection loss, she added: “You see the people, they make their voices heard with their vote. We hold an inauguration to ensure a peaceful transition of power … and once our time is up, we move on.”

McCurdy, meanwhile, said his “stripped down” style of portraiture helps create an “encounter” between the person in the painting and the person looking at it.

“They have plain white backgrounds, nobody gestures, nobody — there are no props because we’re not here to tell the story of the person that’s sitting for them,” McCurdy told the White House Historical Association during an interview for its “1600 Sessions” podcast.

“We’re here to create an encounter between the viewer and the sitter,” he said. “We’re telling as little about the sitter as possible so that the viewer can project onto them.”

He works from a photograph of his subject, selected from about 100 images, and spends at least a year on each portrait. Subjects have no say in how the painting looks. McCurdy said he knows he’s done “when it stops irritating me.”

Obama’s portrait went on display in the Grand Foyer, the traditional showcase for paintings of the two most recent presidents. His portrait replaced Bill Clinton’s near the stairway to the residence, the White House tweeted Wednesday night. George W. Bush’s portrait hangs on the wall opposite Obama’s in the foyer.

Mrs. Obama’s portrait was hung one floor below on the Ground Floor, joining predecessors Barbara Bush, Hillary Clinton and Laura Bush, according to the tweet.

Two spokespeople for Trump did not respond to emailed requests for comment on whether artists have begun work on White House portraits for Trump and former first lady Melania Trump. Work, however, is underway on a separate pair of Trump portraits bound for the collection held by the National Portrait Gallery, a Smithsonian museum.

The White House Historical Association, a nonprofit organization founded in 1961 by first lady Jacqueline Kennedy and funded through private donations and sales of books and an annual Christmas ornament, helps manage the White House portrait process. Since the 1960s, the association has paid for most of the portraits in the collection.

Congress bought the first painting in the collection, of George Washington. Other portraits of early presidents and first ladies often came to the White House as gifts.