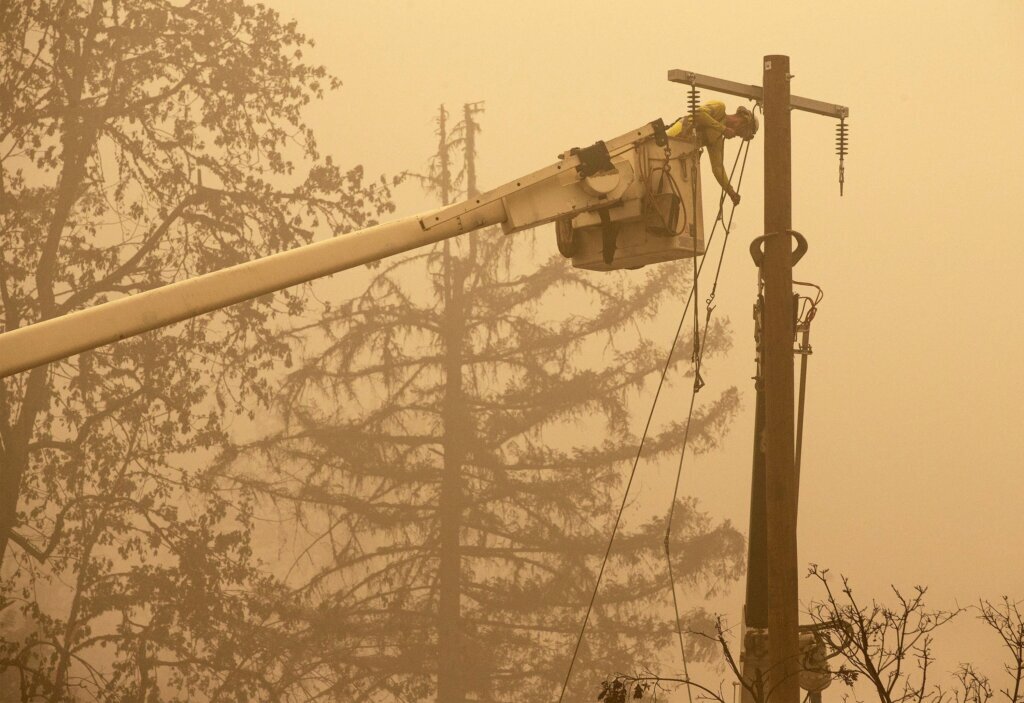 PORTLAND, Ore. (AP) — Oregon utilities began shutting down power to thousands of customers on Friday as dry easterly winds swept into the region in a bid to lessen the risk of wildfires in extremely dry and hot conditions.

Power shut-offs due to extreme fire weather, common in California, are relatively new to the Pacific Northwest. The plans, which were part of permanent rules approved in May to manage wildfire danger in high-risk areas, mark the new reality in a region better known for its rain and temperate rainforests.

Portland General Electric halted power in the Columbia River Gorge and in the Mount Hood corridor east of Portland, Oregon and a second power company was poised to initiate its own shutoff Friday for 12,500 customers if conditions developed as expected. More than 40,000 customers, including in Portland’s posh West Hills neighborhood, will likely lose power by late Friday in planned shutoffs as winds of up to 60 mph hit some areas and temperatures hovered in the high 80s and low 90s.

Schools in the areas with planned power outages canceled classes and authorities urged residents to charge cellphones and be ready to evacuate at a moment’s notice.

Climate change is bringing drier conditions to the Pacific Northwest and that requires strategies that have been common in fire-prone California for the past decade or more, said Erica Fleishman, director of the Oregon Climate Change Research Institute at Oregon State University.

“I don’t know whether this is the solution, but it’s an interim effort to manage wildfire risk,” Fleishman said. “People are going, ‘Oh my gosh!’ The areas we thought were safe, they’re realizing those are not immune to fire anymore. The fire likelihood is changing.”

The proactive power shutoffs were just the second for Portland General Electric ever. The utility shut down power to 5,000 customers in 2020 near Mount Hood during firestorms that ravaged the state. Extreme winds over Labor Day weekend led to wildfires that burned more than 1 million acres (405,000 hectares), destroyed 4,000 homes and killed at least 11 people — and utilities were blamed for some of those fire starts.

Pacific Power, another major utility in Oregon, said if it shuts off power to customers in six counties later Friday, as anticipated, it will be first time the company has done so since putting a wildfire mitigation plan in place in Oregon in 2018.

The utility was sued last year by residents in two towns that burned to ashes in the 2020 wildfires who blamed the company for not shutting down power in advance of the devastating wind storm.

Pacific Power has since hired a team of meteorologists to make fire weather forecasts and is spending more than $500 million to “harden” its electric grid in high-risk areas by replacing wooden poles with carbonized ones and encasing power lines and conductor boxes to reduce the chances of a spark, said Drew Hanson, a Pacific Power spokesman.

“You can look at the West in general and climate change has impacted areas from Southern California, and then Northern California and now up into this region as well, we’re seeing those same conditions,” he said.

“It’s something we are taking very seriously. We realize the changing landscape. We’ve been changing and evolving along with it.”

A number of blazes are burning in Oregon. The largest is the Double Creek Fire burning in northeastern Oregon near the Idaho border. The fire grew by nearly 47 square miles (122 square kilometers) Wednesday because of wind gusts up to 50 mph (80 kph) and as of Thursday had burned a total of nearly 158 square miles (409 square kilometers). It’s threatening about 100 homes near the community of Imnaha.

In Central Oregon, the Cedar Creek Fire east of Oakridge has burned nearly 47 square miles (122 square kilometers). That fire prompted new mandatory evacuations Thursday for several recreational areas and campgrounds in Linn, Deschutes and Klamath counties and for residents in greater Oakridge and Westfir areas to be ready to evacuate.

The Van Meter Fire, which started Wednesday, is burning on Stukel Mountain about 13 miles (21 kilometers) southeast of Klamath Falls. One home and four structures have been destroyed and about 260 structures are threatened by that blaze, Medema said on Thursday.

Crude oil output to go up substantially from next year: Petroleum Secy