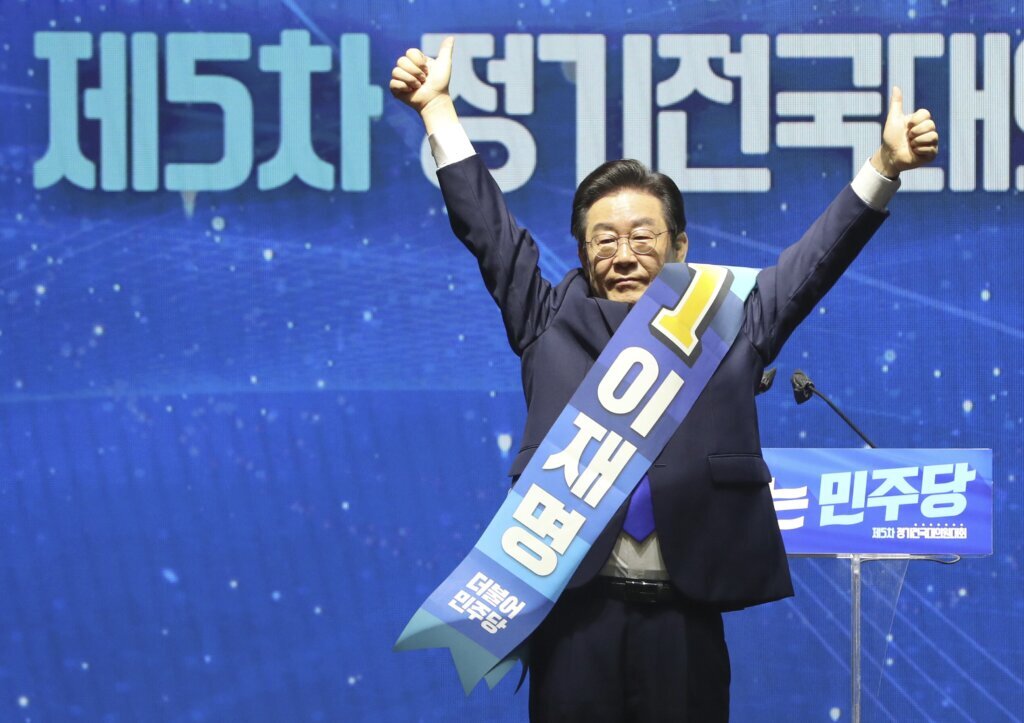 Lee’s dominant win in the Democratic Party chairperson’s race ends a monthslong leadership void for the liberals, who still control a majority in the Parliament. It revives his rivalry with Yoon, a relative political novice who has seen his popularity decline since taking office in May amid a worsening economy, policy mishaps on education and other domestic issues, and mishandled Cabinet appointments.

Lee, who won nearly 78% of the votes from party members, was announced as the Democrats’ new chairperson in a convention held at a gymnastics stadium in the capital, Seoul. In his acceptance speech, Lee criticized the Yoon administration over what he described as failures to address the country’s stark economic inequalities, but also said he was willing to cooperate with Yoon and the ruling conservative party if “they take the right path for the people and country.”

He stressed that his key mission is to bring the Democrats back to power.

“Today’s convention is the start of our victorious march, including in the parliamentary elections two years later, the mayoral and gubernatorial elections four years later and the presidential election five years later,” Lee said, as his supporters cheered and chanted his name.

Yoon, who edged Lee by a historically narrow margin of 0.7 percentage points in the March election, didn’t immediately comment on Lee’s win at the Democratic convention.

The Democrats had been without a chairperson since March and the party was being run by an emergency committee after the previous leadership stepped down following Lee’s loss in the presidential election.

Lee, who called for universal basic income and engagement with nuclear-armed North Korea during the presidential campaign, is one of the most polarizing figures in South Korean politics.

Lee’s supporters appreciate his outspoken style and see him as an anti-elitist hero who could fix establishment politics, eradicate corruption and solve growing economic inequality, a decaying job market and soaring house prices.

To his detractors, the 57-year-old is seen as a dangerous populist who demonizes his conservative opponents and fails to back his ambitious vows for welfare spending with realistic funding plans.

Yoon has been off to a rocky start in office as he grapples with an economy battered by rising prices and unemployment and an increasingly aggressive North Korea, which has ramped up its missile tests to a record pace this year while threatening nuclear conflicts with South Korea and the U.S.

Yoon’s approval ratings have dipped to the 30s or below in recent weeks over unpopular policy decisions, including a poorly explained plan to have children start school earlier that triggered fierce public backlash and forced his education minister to resign this month. Yoon doesn’t have a health minister yet, following the withdrawals of two nominees over accusations of nepotism and illegal use of campaign funds.

Yoon was also criticized for his unwillingness to meet U.S. House Speaker Nancy Pelosi when she visited South Korea following a trip to Taiwan earlier this month that infuriated China. Yoon, who was on vacation, talked to Pelosi by phone instead of face to face. His critics accused him of avoiding seeing her to protect relations with China.