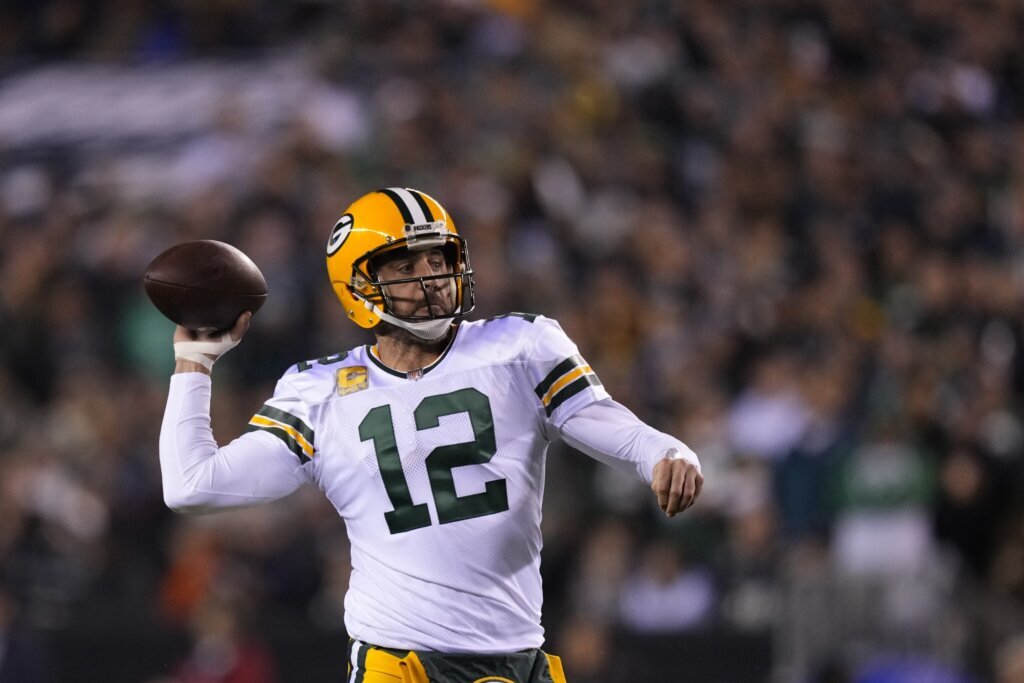 Rodgers was forced out by injuries in a loss to the Eagles.

He’s not ready to wave the white flag on the season.

“As long as we are mathematically alive, I’d like to be out there,” Rodgers said.

Rodgers suffered rib injuries late in the third quarter to go with a broken right thumb suffered weeks ago. He was forced to leave early in another Packers’ loss that all but eliminated them from playoff contention.

Rodgers was 11-of-16 passing for 140 yards, two touchdowns and two interceptions in a 40-33 loss at Philadelphia on Sunday night.

Now, the question is will Rodgers miss much — if any — time?

Green Bay coach Matt LaFleur said it was too early to determine if Rodgers will be healthy enough to play Sunday against Chicago.

“We’ve got to have more conversation before we ever get into that,” LaFleur said. “As long as he’s able to go, I expect him to be out there.”

Rodgers, who turns 39 this week, said he was worried about a punctured lung as well. That scare turned out fine but Rodgers said he’ll need more tests on Monday to find out the severity of the rib injuries.

“The pain was tough,” he said. “I couldn’t really breathe or rotate my upper body.”

But he expected to play.

The Packers (4-8) have little to play for and could shut down Rodgers to take a closer look at backup Jordan Love, their 2020 first-round pick.

Love connected with Christian Watson on a 63-yard, catch-and-run touchdown that cut Philly’s lead to 37-30 in the fourth. He was 6-of-9 passing for 113 yards.

Rodgers already played the last several weeks with a broken right thumb and appeared in pain during a drive in the third that led to a Packers field goal. Rodgers attempted only a few short throws and grimaced after he released the ball.

LaFleur said he was about to call a pass play in the third when it became obvious Rodgers could not really throw.

Rodgers hurt his thumb Oct. 9 during a foiled Hail Mary attempt on the final play of the Packers’ 27-22 loss to the New York Giants in London. Although the Packers have listed Rodgers with a thumb injury ever since, the four-time MVP hadn’t said publicly until this week that it was broken.

Rodgers said his thumb “felt pretty good this week” and he has not yet discussed potential surgery.

The Packers were 4-6 in 2016 when Rodgers predicted the team would “run the table.” Sure enough, a victory at Philadelphia started an eight-game winning streak that sent the Packers to the NFC championship game, where they lost to Atlanta.

Not this week in Philly, not against Jalen Hurts and his 157 yards rushing — an Eagles record for a quarterback.

Rodgers said he’s still waiting until the offseason to make a decision on his future.

Rodgers hasn’t missed any games, but the injury has limited his practice time and he hasn’t approached the level he reached while earning MVP honors each of the last two seasons. That loss to the Giants started a 1-7 tailspin that has put the three-time defending NFC North champions’ playoff hopes in jeopardy.

“We have a five-game stretch, we need to win all five,” Rodgers said. “And we probably need some help.”