The shortfall in the area under paddy cultivation for the week ended August 26 over the same period last year has narrowed to 5.99 per cent from 8.25 per cent in the previous week due to a pick-up in rain in West Bengal and Jharkhand.


This could ease some concern about a big drop in final output. However, a final analysis on output will be possible only when the harvest starts because much of the sowing in eastern India is happening after the ideal planting time, market participants said.


Till last week, paddy acreage across the country was 34.37 million hectares. Up to July 29, sowing was completed in just around 58.31 per cent of the normal area. This had risen to 92.5 per cent by August 26.


“Normal area” is the average covered in the last five years — 39.70 million hectares. The narrowing of the deficit could have an impact on prices, which have risen by 5.5-12 per cent between July 1 and August 15 for some common varieties in select markets of the country. It could also influence the decisions of a meeting — scheduled for next week — of a high-powered panel of officials of the Central and state governments.


ALSO READ: Lower paddy acreage: How will it affect India and the world?


The meeting will take stock of the progress in sowing and price situation in order to finalise the procurement strategy for the next crop season, which will start on October 1, 2022. A strong pickup in acreage might also have an impact on any move to impose export restrictions. 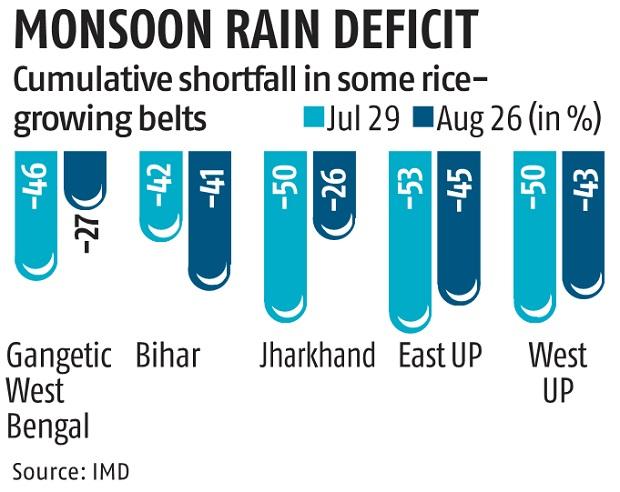 India, the world’s second-largest producer and top exporter of rice, commands a 40 per cent share in the global rice trade. The country exported 21.2 million tonnes in 2021-22. Of that 3.94 million tonnes was basmati.


A Reuters report though said the government might consider imposing some restrictions on export of 100 per cent broken rice, which is less than 20 per cent of the country’s total annual rice export.


Meanwhile, the data showed that the kharif coverage of all crops also went up during the week ended August 26 and around 104.51 million hectares has been brought under cultivation — just 1.58 per cent less than in the same period last year.


Similarly, too in Jharkhand the deficit narrowed from 50 per cent on July 29 to 26 per cent on August 26. But, at the same, the deficit in other major paddy-growing areas such as Bihar and Uttar Pradesh hasn’t reduced much in the past one month.