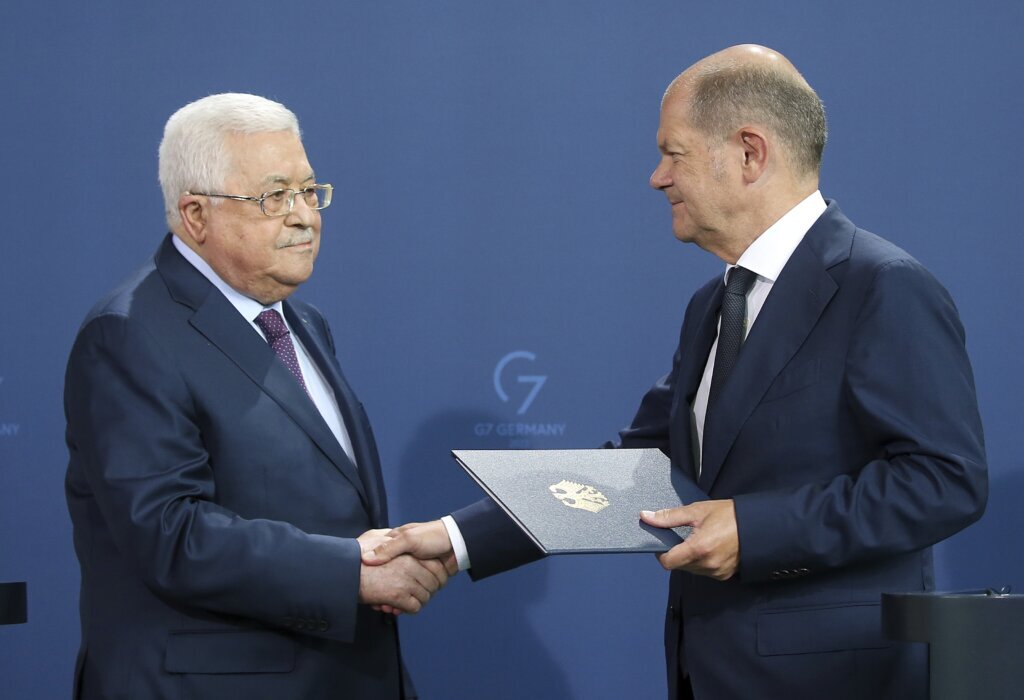 BERLIN (AP) — Palestinian President Mahmoud Abbas expressed no regret Tuesday for the deadly attack by Palestinian militants on Israeli athletes at the Munich Olympics a half century ago, countering that Israel had committed “50 Holocausts” against Palestinians over the years.

Eleven Israeli athletes and a German police officer died after members of the Palestinian militant group Black September took hostages at the Olympic Village on Sept. 5, 1972. At the time of the attack, the group was linked to Abbas’ Fatah party.

Asked whether as Palestinian leader he planned to apologize to Israel and Germany for the attack ahead of the 50th anniversary next month, Abbas responded instead by citing allegations of atrocities committed by Israel since 1947.

“If we want to go over the past, go ahead,” Abbas told reporters after a meeting with German Chancellor Olaf Scholz in Berlin. “I have 50 slaughters that Israel committed.”

Standing next to Scholz, Abbas explicitly used the word “Holocausts” in his reply, drawing a grimace from the German chancellor. Germany has long argued the term should only be used to describe the Nazis’ singular crime of killing six million Jews before and during World War II.

While Scholz had earlier rejected the Palestinian leader’s description of Israel’s treatment of Palestinians as “apartheid,” he did not immediately rebuke Abbas for using the term “Holocaust.”

In a statement to German daily Bild, Scholz later criticized Abbas’s choice of words, saying any downplaying of the horrors of the Holocaust was “unacceptable.”

“The (Palestinian) leader would have gained sympathy if he had apologized for the terrorist attack on Israeli athletes at the Munich Olympics 1972,” he wrote on Twitter. “Accusing Israel of ‘50 Holocausts’ instead is the most disgusting speech ever heard in the German Chancellery,” he said.

In his response, the Palestinian president also said he was committed to building trust and achieving a peaceful solution to the conflict with Israel.

Israeli Prime Minister Yair Lapid said Abbas’ remarks about “50 Holocausts,” made on German soil, were “not only a moral disgrace, but a monstrous lie.”

“Six million Jews were murdered in the Holocaust, including one and a half million Jewish children,” Lapid tweeted. “History will never forgive him.”

Weeks before a planned somber commemoration marking the 50th anniversary of the Munich attack, Germany has also found itself embroiled in controversy in its dealings with the relatives of the Israelis who were killed.

Victims’ families announced last week that they planned to boycott the ceremony after failing to reach agreement on bigger compensation from the German government.

Relatives of the athletes have long accused Germany of failing to secure the Olympic Village, refusing Israeli help and botching a rescue operation in which five of the attackers also died.