Pandya gets 5-wicket win for India v Pakistan; Kohli back 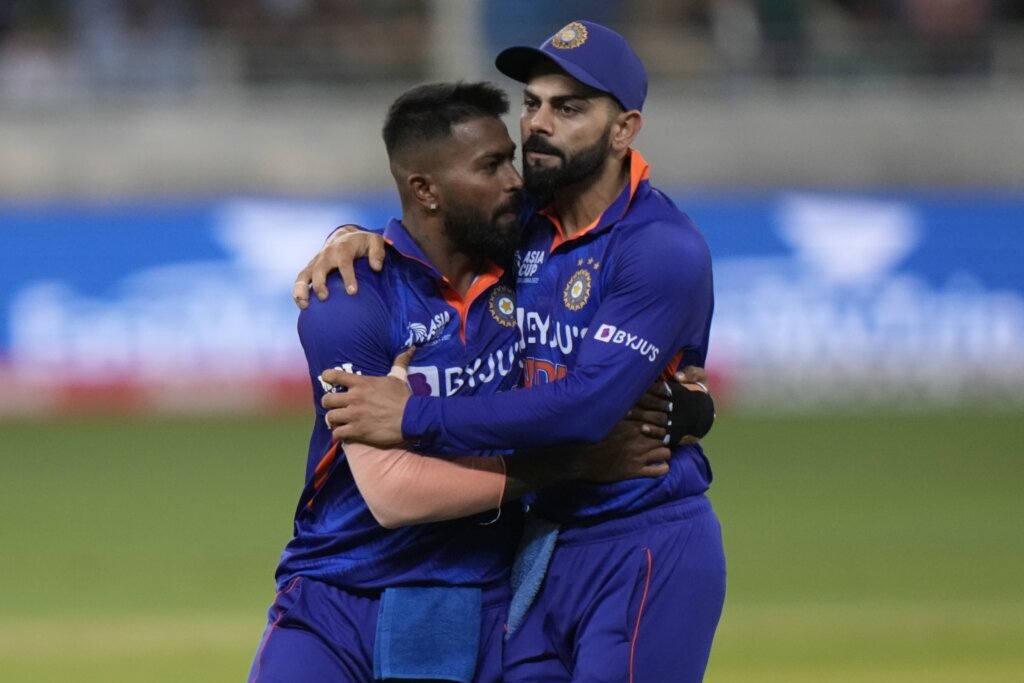 Pandya claimed 3-25 with his fiery short-pitched deliveries and helped India to limit Pakistan to 147 before smashing an unbeaten 33 off 17 balls which carried India to 148-5 with just two balls to spare.

“It’s important to assess the situation and use your weapons,” Pandya said. “I knew they had (Mohammad) Nawaz waiting to bowl, and while we needed seven (runs off the last over), even if we needed 15, I would have fancied my chances.”

Pakistan was set to upstage India but a calm Pandya smashed three boundaries in the penultimate over against Haris Rauf before finishing off the game in style with a six over wide mid on against left-arm spinner Nawaz (3-33).

India’s ploy to challenge the Pakistan top order with short balls after winning the toss worked perfectly as Bhuvneshwar Kumar (4-26) got the key wickets of captain Babar Azam (10) and Fakhar Zaman (10) inside the batting powerplay.

Pandya then sliced through the middle order and also had top-scorer Mohammad Rizwan (43) dismissed with another sharp bouncer before No. 11 Shahnawaz Dahani smashed two late sixes to give Pakistan a glimmer of hope. Dahani, who made 16 off six balls, was the last man out with a ball remaining in the innings.

“The way we started we were 10-15 runs short,” Babar said. “Dahani stepped up with the bat which really gave us something to defend, but it’s a shame we couldn’t finish it off.

“We wanted to have 15 or so (runs) to defend for Nawaz (in the last over), but that wasn’t to be and Pandya finished it off wonderfully.”

Debutant Naseem Shah had KL Rahul bowled for a golden duck before Kohli was dropped on zero by Zaman at second slip off the second ball he faced from the 19-year-old pacer’s superb first over.

Kohli’s landmark 100th T20I, after a rest of more than six weeks, bracketed him with only Ross Taylor of New Zealand to have played 100 games in all three formats.

After his early escape, Kohli smashed Dahani with his trademark pull to the midwicket boundary in the second over before top-edging a six over the keeper’s head against Rauf. However, Kohli was tied down by both spinners Shadab Khan and Nawaz before falling midway through the India innings with 35 off 34 balls.

Rohit Sharma scored 12 off 18 balls before he and Kohli both holed out at long off in successive deliveries from Nawaz (3-33).

Shah, who struggled with cramps in his return spell, had Suryakumar Yadav (18) clean bowled in his return spell to finish with 2-27 but Pandya and Ravindra Jadeja (35) didn’t let the game slip away with their 52-run stand for the fifth wicket and took the game deep.

With seven required off the last six balls, Nawaz clean bowled Jadeja with the first ball before Pandya finished off the game in style.

“Halfway through the innings, we still believed,” Rohit said. “That’s the kind of belief we want to have in this group, where you’re not in the game and you still manage to pull it off … I’ll take wins like this over one-sided wins.”

Pakistan is still favorite to advance as it will take on qualifier Hong Kong in its last Group A game. Afghanistan, Bangladesh and Sri Lanka are in Group B.