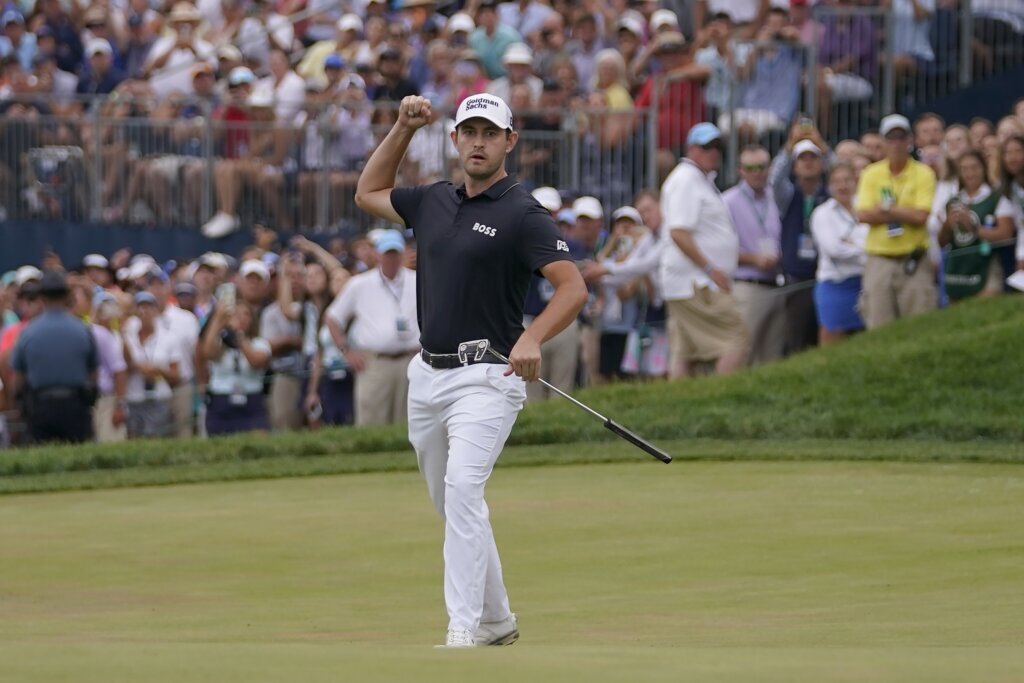 Patrick Cantlay won another thriller Sunday in the BMW Championship, getting a great bounce on the 17th hole that set up a short birdie and led to a 2-under 69 and a one-shot victory over Scott Stallings.

WILMINGTON, Del. (AP) — Patrick Cantlay won another thriller Sunday in the BMW Championship, getting a great bounce on the 17th hole that set up a short birdie and led to a 2-under 69 and a one-shot victory over Scott Stallings.

Cantlay became the first player to win the BMW Championship back-to-back since the FedEx Cup began in 2007. This was on a different course and he didn’t have to go six playoff holes. He also doesn’t have the FedEx Cup lead going to the finale next week at East Lake.

All that mattered was winning at Wilmington Country Club, but he needed a little help.

He was tied for the lead on the 420-yard 17th hole when he decided to hit driver, and he feared it would get hung up in a series of bunkers down the right side. But the ball landed short of the last under, took a big hop over the sand, and tumbled through the first cut and into the fairway just 64 yards from the hole.

“I hit a lot of solid and got a lot of good breaks,” Cantlay said. “That break was something I was not expecting. It was big for me to take advantage of it.”

That he did. Cantlay hit a spinner that skipped and stopped 5 feet from the flag, holed the birdie putt for the lead and then found the green on No. 18 from a fairway bunker.

A year ago, he made one clutch putt after another about an hour down the road at Caves Valley and beat Bryson DeChambeau. That gave him the top seed at the Tour Championship, which comes with a two-shot margin before the tournament starts, and Cantlay won the FedEx Cup and its $18 million prize with a one-shot win over Jon Rahm.

This time, he goes into the FedEx Cup finale as the No. 2 seed, meaning he will start next week two shots behind Masters champion Scottie Scheffler.

Scheffler put on a late charge with three birdies in a four holes and was one shot behind. But he missed a 4-foot par putt on the final hole for a 70, and it looked like it might cost him.

Xander Schauffele, playing in the final group with Cantlay, had a 7-foot birdie putt. If he made it, Schauffele would have finished alone in third, moving Scheffler to fourth. That would have made Cantlay the top seed. But the putt slid by on the right. Schauffele had a 71.

Stallings has gone 238 starts since his last victory eight years ago at Torrey Pines, and he played like that drought might end. But he missed four birdie chances inside 18 feet at the end, the last one from just inside 10 feet.

The consolation prize is his first trip to the Tour Championship.

Stallings wasn’t alone. Adam Scott is making his way back to East Lake. He was at No. 77 in the FedEx Cup when the postseason started and a tie for fifth last week moved him to No. 45.

Scott made eagle on the 12th hole and hit some superb lag putts on firm, crispy greens at Wilmington for a 71 to tie for fifth.

Needing a par on the last hole, Scott tugged his tee shot to the edge of a bunker, meaning he had to stand in the sand and try to hit out of a sticky first cut with the golf ball about thigh-high. He pulled that into a bunker, then hit a splendid shot to tap-in ran.

Aaron Wise had a 73 and earned the 30th spot. He was among four players who moved into the top 30 who are eligible for the Tour Championship. The others were Stallings, Scott, Aaron Wise and K.H. Lee, who had a 65 on Sunday to tie for fifth.