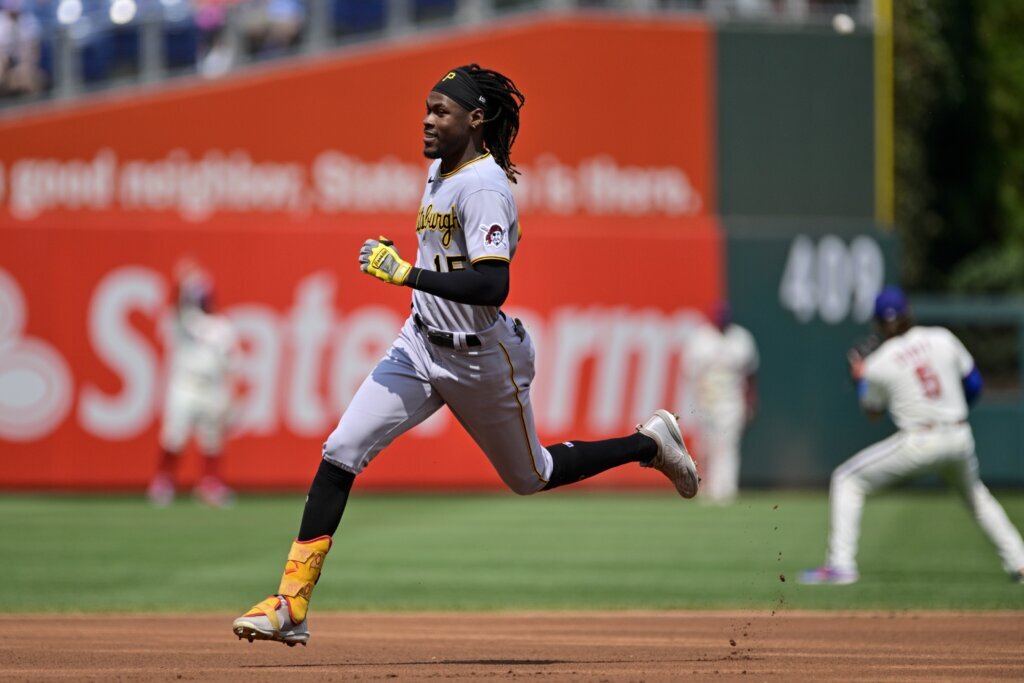 PHILADELPHIA (AP) — Oneil Cruz, Tucupita Marcano and Bryan Reynolds all tripled and scored, and Roansy Contreras struck out seven over five innings to lift the Pittsburgh Pirates past the Philadelphia Phillies 5-0 Sunday and end a seven-game losing streak.

The Pirates won for only the third time in 16 games, and they also snapped the Phillies’ six-game winning streak.

The Pirates became the second team this season to hit three triples in a game. It was the first time they had accomplished that feat since May 25, 2018.

Cruz started the three-bagger parade when he lined one to center off Noah Syndergaard (8-9) on the second pitch of the game. Ke’Bryan Hayes singled on the third pitch for a 1-0 lead. Marcano tripled in the fourth and scored on Greg Allen’s sacrifice bunt. Reynolds tripled to right in the sixth and scored on Michael Chavis’ single.

The rare good news for the Pirates did come in threes.

Bligh Madris chased Syndergaard in the sixth on a line-drive double off the right-field wall that made it 5-0.

The Phillies still hold the second NL wild card as they head out for a six-game trip that includes three in Arizona and three in San Francisco. Both teams have losing records, and the Phillies have feasted on the sub-.500 crew since interim manager Rob Thomson took over on June 3. The Phillies took two of three against the Pirates after sweeping a four-game set against the Reds.

There has been no late-summer swoon against the also-rans that could cost the Phillies a playoff spot like it has in recent seasons. At least, not yet.

“Maybe it’s just difference in personnel,” Thomson said. “We’re a better ballclub than we have been in the past. We’ve just got better talent, that’s part of it.”

Perhaps, but Bryce Harper, Nick Castellanos, Kyle Schwarber and Co. couldn’t solve Contreras (4-4). He allowed three hits and walked two in his first win since July 7. He combined with three relievers on a four-hitter.

IT’S JUST AS SIMPLE AS THAT

Phillies: RHP Zach Eflin (right knee) could return to a bullpen role at some point this season. Eflin (3-5, 4.37 ERA) hasn’t pitched since June 25 and could throw a bullpen session this week.

The Pirates have yet to name a starter for Monday’s opener of a three-game series at Milwaukee. Corbin Burnes (9-6, 2.84 ERA) pitches for the Brewers. Pittsburgh has won five straight games against Milwaukee.