Pistons draft Ivey at No. 5 and acquire No. 13 pick Duren 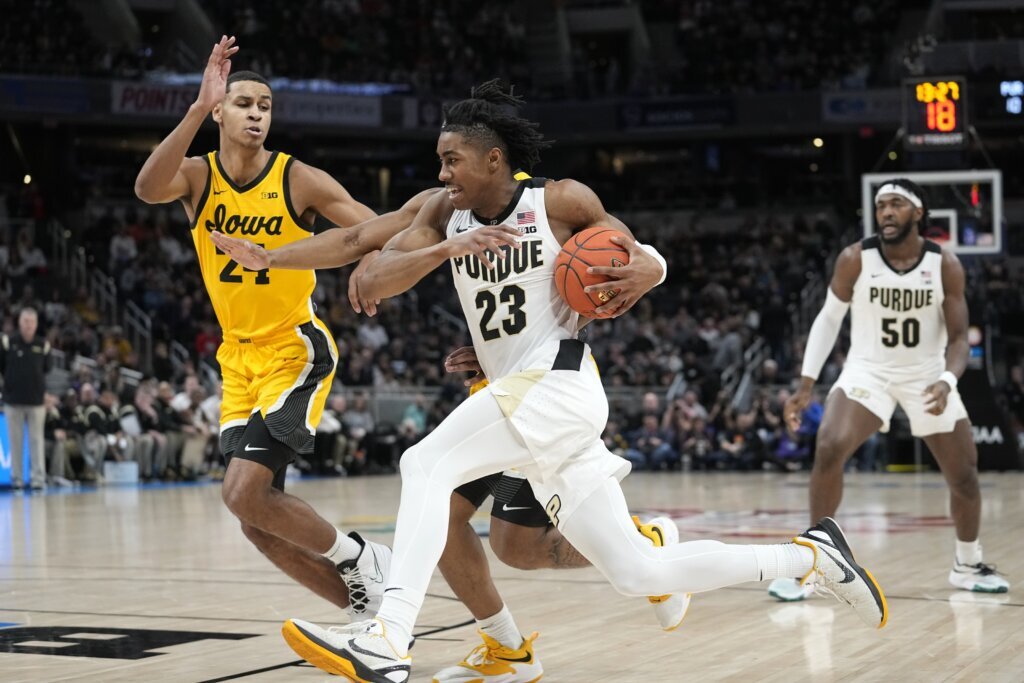 DETROIT (AP) — The Detroit Pistons suddenly have a dynamic backcourt, giving the three-time championship franchise a chance to restore…

DETROIT (AP) — The Detroit Pistons suddenly have a dynamic backcourt, giving the three-time championship franchise a chance to restore a bit of glory.

Detroit also made a savvy deal to bolster its frontcourt.

The Pistons selected Purdue’s Jaden Ivey with the No. 5 overall pick in the NBA draft on Thursday night, adding desperately needed talent to a team led by point guard Cade Cunningham.

“I fit well with Cade,” Ivey said. “He’s a guy who wants to win and is a very unselfish player. I can play on the ball or off the ball. We can take turns.”

The busy team acquired Memphis center Jalen Duren, who was drafted No. 13 overall by Charlotte and traded to New York, along with Kemba Walker in exchange for a 2025 first-round pick they added the previous day.

“We were aggressive in making it happen,” general manager Troy Weaver said. “We had the cap room to make it happen.”

The Pistons are expected to negotiate a buyout with Walker, according to a person familiar with the situation. The person spoke to The Associated Press on condition of anonymity because the team’s plans had not been announced.

Detroit’s rebuilding plan should get a boost with the addition of a dynamic guard with scoring ability and a shot-blocking center.

The 6-foot-4, 195-pound Ivey can play point or shooting guard. He averaged 17.3 points last season and made 46% of his shots overall and 36% beyond the 3-point arc for the Boilermakers.

“He brings physicality and presence inside that we were looking for,” Weaver said.

The day before the draft, the Pistons agreed to trade Jerami Grant to Portland for the No. 36 pick overall this year and a first-round pick in 2025 that they will now send to Charlotte. The Olympic gold medalist was due to make $21 million and Detroit didn’t appear to be interested in giving him another contract to be part of its latest rebuild.

Detroit directed the Trail Blazers to use the early second-round selection to take 6-7 Italian guard Gabriele Procida, who shot 38.3% on 3-pointers for Bologna.

The Pistons cleared cap space with the trade, giving them about $44 million available this summer to potentially be a major player in free agency. They also lost a player, who averaged nearly 21 points over the previous two seasons.

Ivey will have opportunities to fill part of the scoring void left by Grant’s departure with shots set up by Cunningham, drafted No. 1 overall last year and unanimously voted to the NBA All-Rookie first team.

While the Pistons hit on their pick last year, they may have missed in 2020 with the selection of guard Killian Hayes at No. 7 overall. Hayes has averaged 6.8 points and 4.5 assists over two seasons.

The franchise does seem to have some other players to build around, including Saddiq Bey and Isaiah Stewart, a pair of players acquired in trades after being drafted in the first round by other teams.

“We’re trying to build this the right way,” Weaver said.

To get the sputtering rebuild going, though, Detroit needs Ivey and Duren to pan out after winning just 23 games last year and finishing ahead of only Houston and Orlando in the league.

The Pistons have made the playoffs just twice over the last 13 seasons, following an eight-year run in which they won a third NBA title, fell a win short of repeating and advanced to six straight conference finals.

It would be quite a story if Ivey helps the team’s turnaround.

His father, Javin Hunter, was born in Detroit and was a standout receiver at Notre Dame. His mother, Niele, Notre Dame women’s basketball coach, played for the Detroit Shock in the WNBA in 2005. His late grandfather, James Hunter, started 77 games at defensive back for the Detroit Lions from 1976 to 1982.

“When my agent told me I was going to the Pistons, I just broke down in tears,” Ivey said. “Grandpa is up in heaven smiling right now,” Ivey said.

Ivey is the highest-drafted player from Purdue since Glenn Robinson was selected first overall in 1994 by Milwaukee.

“He’s put in the work and deserves this,” Boilermakers coach Matt Painter said. “He has a lot of potential to be a star in the NBA.”

Troy Deeney: Bellingham should snub Liverpool to be a…