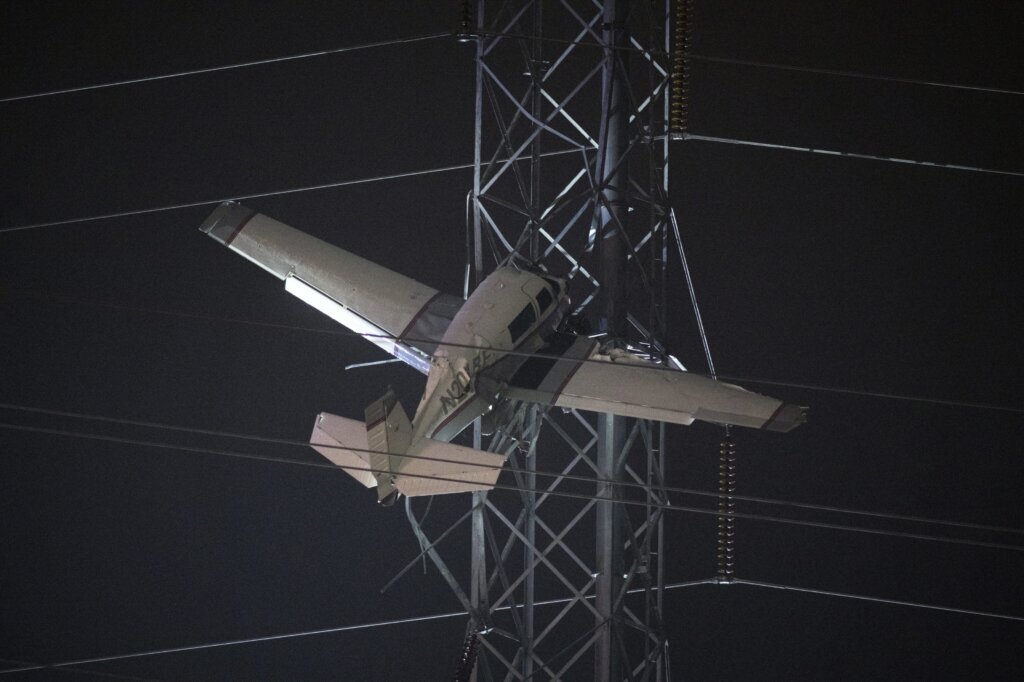 The Federal Aviation Administration said in a statement that the single-engine plane, which had departed White Plains, New York, crashed into the power lines near Montgomery County Airpark in Gaithersburg around 5:40 p.m. Sunday. The FAA said two people were aboard.

Pete Piringer, chief spokesperson for the Montgomery County Fire & Rescue Service, said on Twitter that the people on board are uninjured and that rescuers had been in contact with them. He had at one point said in a video message that three people were on the plane but later clarified that it was two.

Montgomery County Fire Chief Scott Goldstein told reporters that it would take until 9:30 p.m. or later to have all the resources in place to proceed with rescue efforts, but he gave no timetable for how long after that it would take to bring the plane occupants down.

Goldstein said that utility contractors will first work to ground the high-tension wires to make it safe for rescuers to work. Fire crews will then use bucket trucks or a crane to make the plane stable by chaining it or strapping it to the tower. After the plane is more stable, Goldstein said, rescuers will use the crane or bucket trucks to bring the two people down. He said rescuers are periodically contacting them by cellphone to check on them.

The FAA identified the plane as a Mooney M20J.

The video showed a small white plane positioned nose up near a power tower. A local television station’s live video showed the plane remained stuck in the transmission tower after 8 p.m.

The plane was stuck about 100 feet (30 meters) above the ground, and the transmission lines remained live, complicating rescue efforts, Piringer said.

“Everything is still energized at this time,” he said.

The utility Pepco reported that about 80,000 customers were without power in Montgomery County. Piringer said that many traffic lights were also out in the area. The utility said in a statement that its personnel were waiting for rescuers to clear them to enter the scene before they can make repairs at the site of the crash.

The crash took place in Gaithersburg, a city of 69,000 people about 24 miles (39 kilometers) northwest of Washington, D.C.

The cause of the crash wasn’t immediately clear. The FAA and National Transportation Safety Board will investigate what happened.