Police: Man shot was unarmed, officers feared he would fire 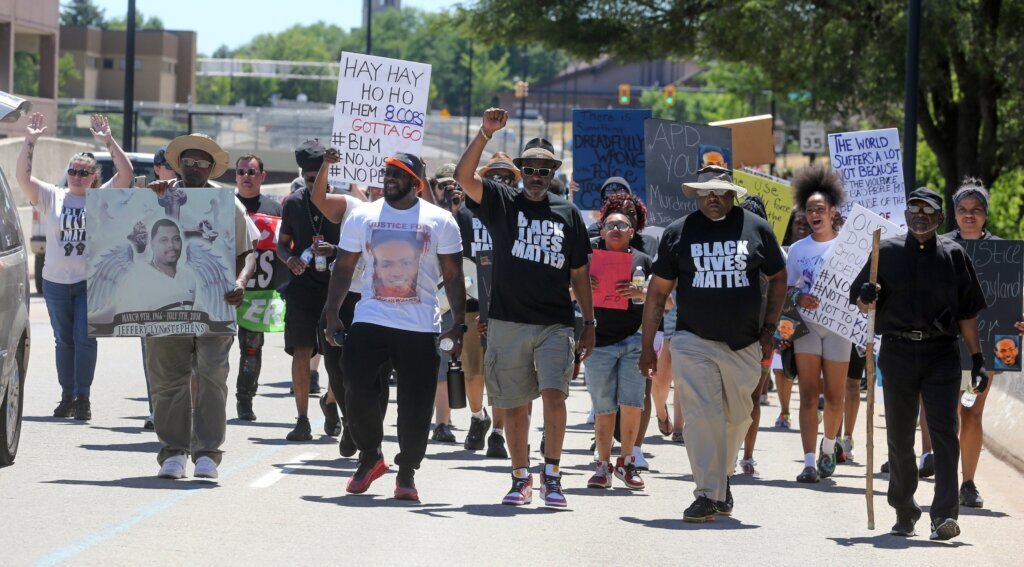 AKRON, Ohio (AP) — A Black man shot and killed by Akron police officers in a hail of bullets following…

AKRON, Ohio (AP) — A Black man shot and killed by Akron police officers in a hail of bullets following a vehicle and foot pursuit was unarmed at the time of the shooting, but a shot appeared to have come from the vehicle during the pursuit, and officers said they feared he was preparing to fire when they discharged their weapons, authorities said.

Police on Sunday released video the mayor called “heartbreaking” of the pursuit and shooting of Jayland Walker, 25, while pleading for peace and patience from the community while the state investigation into the shooting continues. It was not yet clear how many shots were fired, but Walker sustained more than 60 wounds. An attorney for Walker’s family said he was on the ground while officers continued to fire.

Chief Steve Mylett said officers attempted to stop Walker’s car early Monday for unspecified traffic and equipment violations, but less than a minute into a pursuit the sound of a shot was heard from the car and a transportation department camera captured what appeared to be a muzzle flash coming from the vehicle. Mylett said that changed the nature of the case from “a routine traffic stop to now a public safety issue.”

Police said a few minutes later the car slowed and Walker emerged from the still-moving vehicle wearing a ski mask and fled on foot. A handgun, a loaded magazine and a wedding ring were found on the seat and a casing consistent with the weapon was later found at the point where officers believed a shot came from the vehicle.

After an unsuccessful attempt to use stun devices, the foot chase continued to a parking lot, at which point a crescendo of bullets can be heard. Mylett said he has watched the video dozens of times and Walker’s actions at the time are hard to distinguish, but a still photo seems to show him “going down to his waist area” and another appears to show him turning towards an officer and a third picture “captures a forward motion of his arm.”

After the shooting, the officers who fired were kept apart from each other and watched, and arriving investigators walked them individually through the scene, Myett said.

“Each officer independent of each other related that they felt that Mr. Walker had turned and was motioning and moving into a firing position,” he said.

Mylett said an officer firing at someone has to be “ready to explain why they did what they did, they need to be able to articulate what specific threats they were facing … and they need to be held to account.” But he said he is withholding judgment on their actions until they give their statements, and he said the union president has told him that all are “fully cooperating” with the investigation.

Police said more than 60 wounds were found on the body but more investigation will be needed to determine exactly how many rounds the eight officers fired and how many times Walker was hit. Officers provided aid, and one can be heard saying he still had a pulse, but he was pronounced dead at the scene, Mylett said.

Ohio Attorney General Dave Yost vowed a “complete, fair and expert investigation” and cautioned that “body-worn camera footage is just one view of the whole picture – before drawing conclusions, the full review must take place.”

The officers involved in the shooting have been placed on paid administrative leave, which is standard practice in such cases.

Walker’s family is calling for accountability but also for peace, their lawyers said after the city released the video of the shooting. One of the attorneys, Bobby DiCello, said police handcuffed him before trying to provide first aid.

“How it got to this with a pursuit is beyond me,” DiCello said, adding that Walker’s family doesn’t know why he fled from police. Walker was grieving the recent death of his fiancee, but his family had no indication of concern beyond that, DiCello said.

“He was sad, but he was getting through it,” DiCello said. He said he doesn’t know whether the ring found near the gun belonged to Walker.

India has new Covid sub-variant of Omicron, may be alarming: Israeli expert