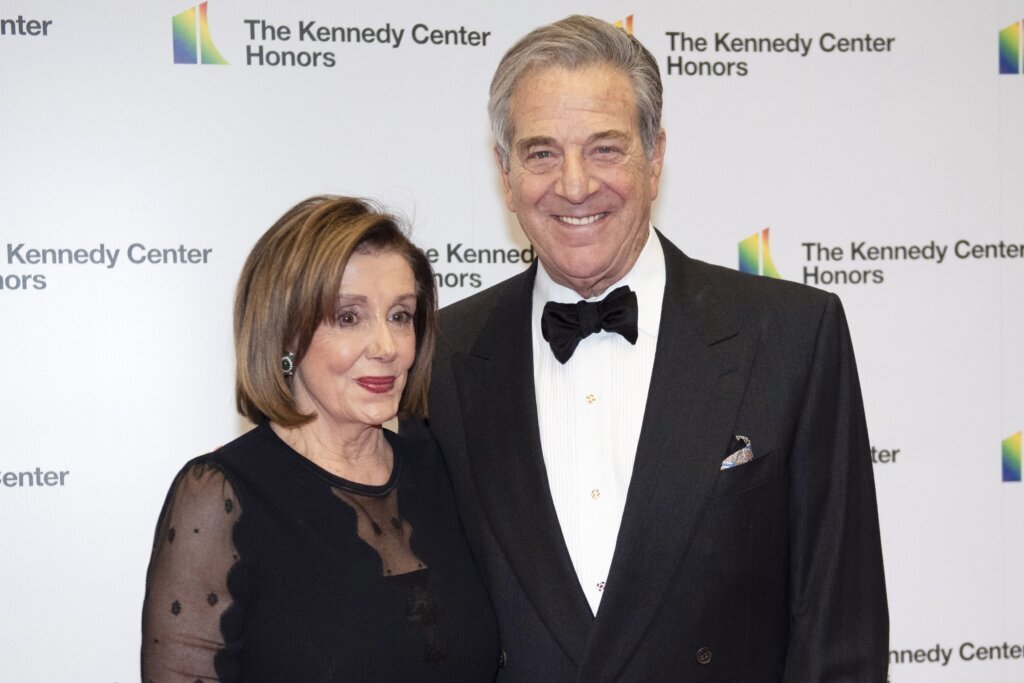 The man accused of attacking Paul Pelosi, the husband of House Speaker Nancy Pelosi, will be charged Monday with threatening the spouse of a federal official, according to a source briefed on the investigation.

WASHINGTON (AP) — The man accused of attacking House Speaker Nancy Pelosi’s husband with a hammer told police he wanted to hold the Democratic leader hostage and “break her kneecaps” to show other members of Congress there were “consequences to actions,” authorities said Monday.

In a chilling federal complaint, officials say that David DePape, 42, carrying zip ties and tape in a backpack, broke into the couple’s San Francisco home early Friday morning, went upstairs where 82-year-old Paul Pelosi was sleeping, and demanded to talk to “Nancy.”

When a surprised Paul Pelosi told the intruder she was not there, DePape said he would wait — even after being told she would not be home for some days. The assailant then started taking out twist ties, to tie him up, the complaint says.

The federal filing stands in contrast to the mocking jokes and conspiracy theories about the Pelosi attack circulating by far-right figures and even some leading Republicans just a week before the hard-fought midterm elections. The San Francisco district attorney and police chief both said the attack was intentional.

“By breaking Nancy’s kneecaps, she would then have to be wheeled into Congress, which would show other members of Congress there were consequences to actions,” the complaint said.

DePape told police of his plans to hold Speaker Pelosi hostage to “talk to her” and viewed her “as the “leader of the pack of lies told by the Democratic Party,” the eight-page complaint says.

“If she were to tell DePape the ‘truth,’ he would let her go and if she ’lied,’ he was going to break “her kneecaps,” the complaint alleges.

DePape is charged federally with influencing, impeding, or retaliating against a federal official by threatening or injuring a family member. He also faces one count of attempted kidnapping of a United States official on account of the performance of official duties.

It was not immediately clear whether DePape had an attorney who could speak on his behalf.

DePape is a Canadian citizen who legally entered the United States in 2000 but has stayed long after his visa expired, according to a U.S. official who was not authorized to discuss the matter publicly and spoke on condition of anonymity.

Family described DePape as estranged, and he was known by some in San Francisco as a pro-nudity activist who appeared to embrace a range of conspiracy theories. DePape has lived for the past two years in a garage at a residence in Richmond, California, the complaint said.

The announcement of the federal charges came as San Francisco’s district attorney was set to announce state criminal charges as well.

The attack was an unsettling echo of the Jan. 6, 2021, insurrection at the Capitol, when rioters trying to overturn Joe Biden’s election defeat of Donald Trump stormed the halls eerily calling “Where’s Nancy?” Some carried zip ties.

Police were dispatched to the home in the upscale Pacific Heights neighborhood around 2:20 a.m. Friday after Paul Pelosi placed a 911 call. DePape broke into the rear glass door and made his way upstairs to confront Paul Pelosi, police said. They arrived to see the two men struggling over a hammer, and then DePape struck Pelosi at least once before being tackled by officers.

DePape was arrested Friday on suspicion of attempted murder, elder abuse and burglary in a gruesome attack that has amplified the toxic political climate ahead of the Nov. 8 midterm elections. He is expected to be arraigned Tuesday in San Francisco.

Paul Pelosi remains hospitalized in San Francisco after undergoing surgery for a fractured skull and other injuries. Speaker Pelosi, who was in Washington, D.C., at the time of the attack, returned swiftly to California. Unlike presidents, congressional leaders have security protection for themselves, but not their families.

In the ambulance to the hospital, Paul Pelosi told police he had never seen DePape before, the complaint said.

DePape told police it was difficult to break through the glass door with his hammer, and he went upstairs and told a sleeping Paul Pelosi to wake up. Pelosi appeared surprised, DePape said.

After Paul Pelosi told the intruder his wife was not home, he then asked DePape how they could resolve the situation, the complaint said. DePape explained he was tired, and wanted to tie Pelosi up while they waited. As they talked, Paul went to the restroom and called 911.

DePape told investigators that he didn’t leave even though he knew Paul Pelosi had called 911 because “much like the American founding fathers with the British, he was fighting against tyranny without the option of surrender,” the affidavit said.

The federal complaint also said DePape said he wanted “to use Nancy to lure” another person But the complaint provides no other details of that plan.

San Francisco’s district attorney, Brooke Jenkins, strongly rejected conspiracy theories about the attack, confirming the assailant was targeting the Democratic leader when he broke into the couple’s home.

“At the time that the suspect had entered the Pelosi home that he was in fact, looking for Ms. Pelosi,” Jenkins told reporters late Sunday in San Francisco.

“We have nothing to suggest that these two men knew each other prior to this incident,” she said.

The district attorney’s remarks came as crass commentary on the attack circulated on social media. San Francisco’s police chief has said the attack was targeted at Nancy Pelosi.

Elon Musk over the weekend tweeted, then deleted, a fringe website’s conspiracy theories to his millions of followers, as his purchase of Twitter has raised concerns that the social media platform would no longer seek to limit misinformation and hate speech.

Trump’s son, Donald Trump Jr., was among those making light of the attack on Paul Pelosi, tweeting out crude jokes about it.

In the heated political climate, a week before the midterm elections, tensions are high with record security threats against lawmakers and other officials.

The incident sparked fresh security concerns for lawmakers and other elected officials before the midterms.

With nearly 10,000 threats against members of Congress in the last year, U.S. Capitol Police have advised lawmakers to take precautions. Chief Tom Manger, who leads the U.S. Capitol Police, has said the threat from lone-wolf attackers has been growing and the most significant threat the force is facing is the historically high number of threats against lawmakers, thousands more than just a few years before.

The beating of the speaker’s husband follows other attacks and threats. This summer, a man carrying a gun, a knife and zip ties was arrested near Justice Brett Kavanaugh’s house in Maryland after threatening to kill the justice. In 2017, Republican Rep. Steve Scalise was seriously injured when a Bernie Sanders supporter opened fire on Republicans at a congressional baseball game practice.