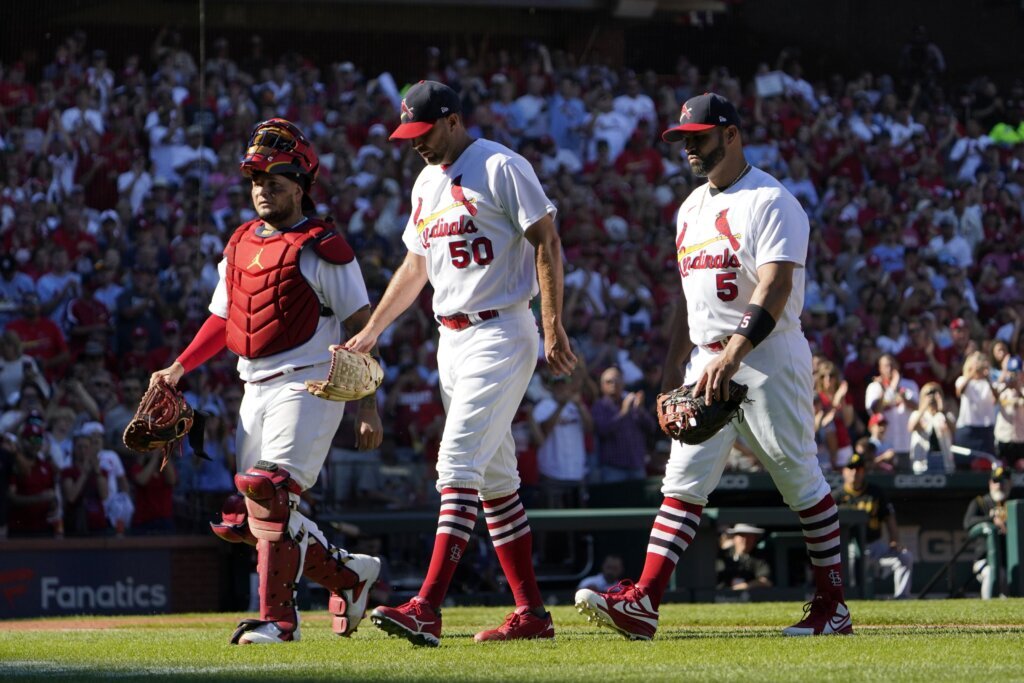 ST. LOUIS (AP) — Albert Pujols hit his 702nd career home run and tied Babe Ruth for second on the all-time RBI on Sunday, but the Pittsburgh Pirates took the game from the St. Louis Cardinals 7-5.

Ben Gamel and Bryan Reynolds homered for Pittsburgh, which has won four of six. Chase DeJong (6-2) got the win for the Pirates.

Yadier Molina and Pujols, who will retire at the end of the season, were honored in a 46-minute ceremony prior to their last regular-season home game.

Pujols ripped a two-run double in the opening inning, and Molina brought him in with a fly to left for a 3-0 lead.

The 42-year-old Pujols followed with his 23rd home run of the season in the third inning, a 409-foot drive off Roansy Contreras that tied the game at 4. Pujols is fourth on the all-time home run list behind Babe Ruth (714), Hank Aaron (755) and Barry Bonds (762).

Molina and pitcher Adam Wainwright started their 328th game together. Wainwright (11-12) allowed six runs on six hits over 4 2/3 innings. Molina, Pujols and Wainwright were all removed from the game together so they could walk off as a trio with two outs in the fifth. Wainwright has yet to decide if he will come back next season.

The Cardinals, who have clinched their fifth NL Central title in the last 10 years, closed the regular-season with 26 wins in their last 34 home games.

Pujols and Molina were given gifts from the team, including a set of golf clubs, a silver plate and one-of-a-kind artist drawings of each player. The two have a combined 41 years in the majors. Former teammates Matt Holiday, Ray Lankord and Jason Isringhausen were present for the ceremony.

Hall of Fame sportswriter Rick Hummel worked his last home game. Hummel, who has covered the Cardinals for the last 51 years for the St. Louis Post-Dispatch, is retiring after this season.

The 76-year-old Hummel has covered 42 All-Star games and 35 World Series.

RHP Mitch Keller (5-12, 3.92) will start against the Cardinals in the opener of a three-game series on Monday in Pittsburgh. Keller has allowed three or fewer earned runs in 18 of 21 starts since coming off the disabled list on May 31. The Cardinals have yet to announce a starter.