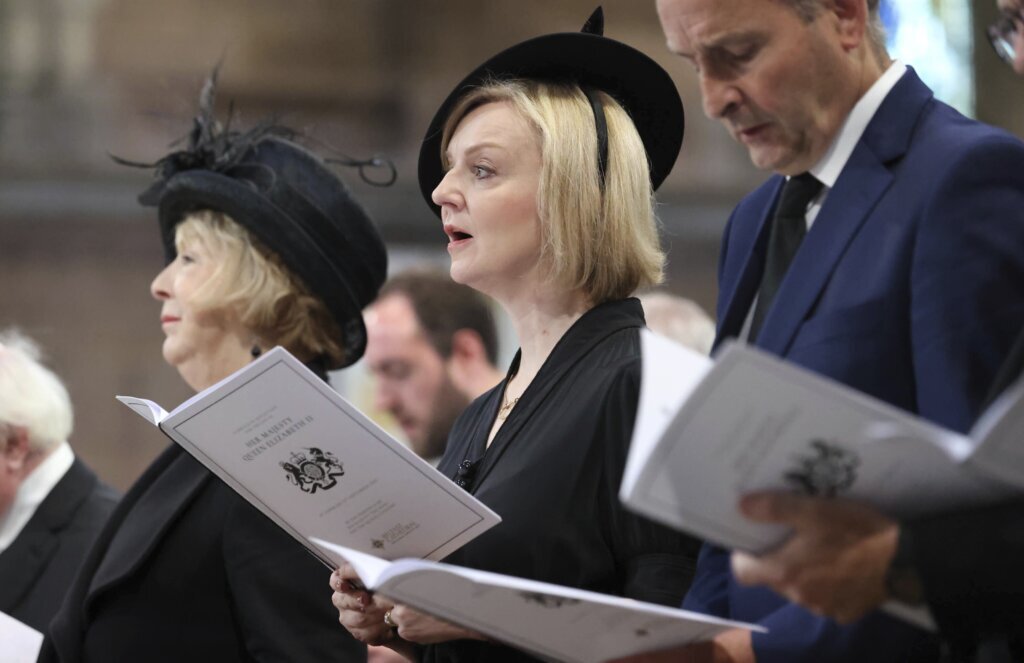 The epochal event has been both a challenge and a reprieve for the U.K.’s untested new leader. The monarch’s demise has put everyday politics in the U.K. on hold as the country plunged into an emotional mourning period.

“It’s given her space to think with the media off her, to plan,” said political historian Anthony Seldon. “The one thing (a) prime minister most lacks is time to think.”

Truss won a Conservative Party leadership contest on Sept. 5 and was appointed prime minister by the queen at Balmoral Castle the next day, in one of Elizabeth’s final acts.

Truss was informed that the queen was gravely ill as she announced an emergency energy package in the House of Commons on Sept. 8 that was designed to ease the impact of steep fuel bill increases driven by Russia’s invasion of Ukraine.

The monarch’s death was announced a few hours later, leaving many questions about the support package unanswered as Parliament was suspended during 10 days of official mourning.

Truss’s appearances since then have been largely ceremonial. She has traveled to memorial services for the queen in Scotland, Wales and Northern Ireland and attended the accession ceremony of King Charles III. On Monday, Truss will join hundreds of political leaders and dignitaries from around the world in the 2,000-strong congregation for the queen’s funeral in Westminster Abbey.

After that, politics will return with a vengeance and Truss will try to make up for lost time. She will launch herself onto the world stage, travelling to New York to attend the United Nations General Assembly next week.

Even before the funeral, Truss is quietly getting to know other world leaders. She is holding private meetings this weekend with key allies, including the prime ministers of Canada, Australia and New Zealand, Irish leader Micheal Martin, U.S. President Joe Biden and President Andrzej Duda of Poland, whose country is in the front line of support for Ukraine.

“The fact that so many leaders from around the world … are flooding to London gives the new prime minister ample time for soft diplomacy, those quiet conversations before and after the funeral, which will help her achieve her objective — if it is achievable — of ‘global Britain,’” Seldon said.

Truss wants to reassure allies that she will continue the strong political and military support for Ukraine begun under her predecessor, Boris Johnson. At the U.N., she is also likely to urge the world’s democracies to work more closely together in what she has labeled a “network of liberty.”

But Truss also has some bridge-building to do, especially with Biden. The U.S. leader has expressed concerns about the impact of Britain’s departure from the European Union on the delicate peace in Northern Ireland.

Northern Ireland shares a border with EU member Ireland, and Brexit has brought new checks on goods that have spiraled into a political crisis in Belfast. British Unionist politicians are refusing to form a power-sharing government with Irish nationalists, saying the Brexit border checks undermine Northern Ireland’s place in the U.K.

Johnson’s government announced plans to suspend the checks and rip up part of its Brexit treaty with the EU — a move that angered the bloc and alarmed Washington. Biden has warned that no side should do anything to undermine the 1998 Good Friday Agreement, cornerstone of Northern Ireland’s peace process, which the U.S. was instrumental in negotiating.

Truss says she wants to reach an agreement with the EU, but will push ahead with Johnson’s plan to rewrite the rules if that fails. It’s unclear whether U.K.-EU relations, which hit rock bottom during Johnson’s turbulent tenure, will improve under Truss. She ruffled French feathers last month when she said the “jury is out” on whether French President Emmanuel Macron is a friend or a foe.

At home, Truss — a small-state, free-market conservative — has been forced to leave her political comfort zone and spend billions capping energy prices for homes and businesses that had been facing an 80% increase next month as Russia’s war in Ukraine sends energy prices surging.

The government will reveal more details of its energy package — and face sharp questions from the opposition — when lawmakers return to Parliament on Wednesday.

Then on Friday, Truss-appointed Treasury chief Kwasi Kwarteng is due to make an emergency budget statement to address the U.K.’s deteriorating economic picture. Inflation eased slightly in August but remains at 9.9%, the highest in four decades, while the pound is at a 37-year low against the dollar. The Bank of England has forecast a long recession to start later this year.

Kwarteng is likely to announce cuts to personal or corporate tax — or both — in hopes that will spur economic growth, though critics say such measures help the well-off more than the poorest.

Newspapers report that Kwarteng also wants to remove a cap on bankers’ bonuses imposed after the 2008 global financial crisis. That would be highly contentious, and would abruptly end the political truce that has followed the queen’s death.

“We’re beginning to see … the signs of what the new economics of Liz Truss is all about,” opposition Labour Party lawmaker Margaret Hodge told the BBC. “Thinking about bankers at this stage is obscene.”