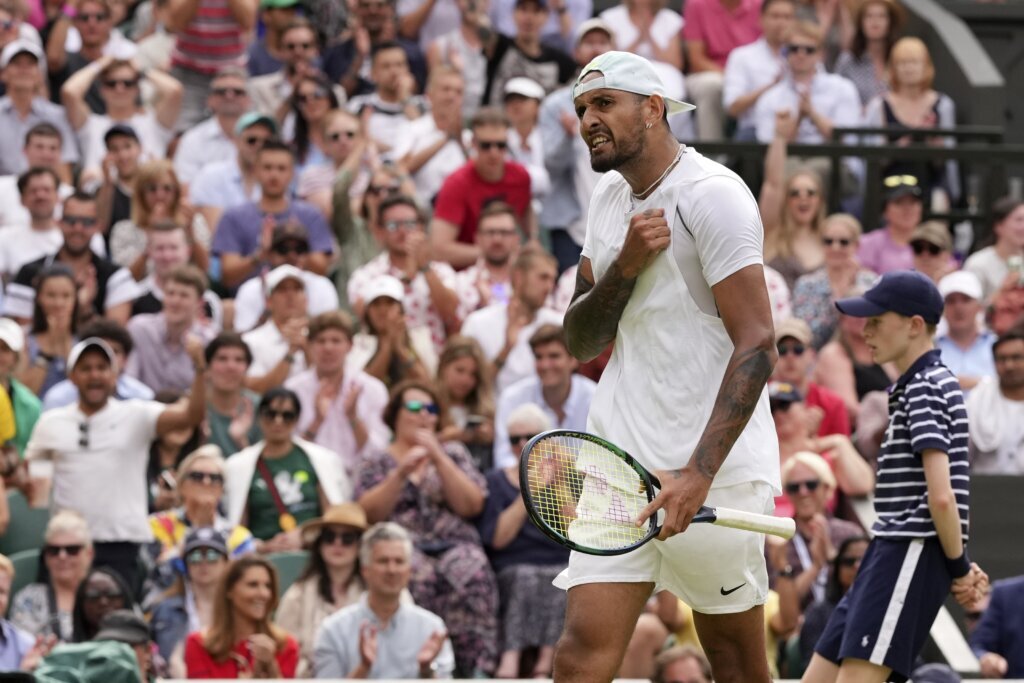 WIMBLEDON, England (AP) — Much quieter, much calmer than in his previous match, Nick Kyrgios overcame a troublesome right shoulder…

WIMBLEDON, England (AP) — Much quieter, much calmer than in his previous match, Nick Kyrgios overcame a troublesome right shoulder to deliver 35 aces and beat Brandon Nakashima 4-6, 6-4, 7-6 (2), 3-6, 6-2 at Wimbledon on Monday to reach a Grand Slam quarterfinal for the first time in 7 1/2 years.

The unseeded Kyrgios improved to 6-0 over his career in five-setters at the All England Club and collected his tour-leading 11th grass-court victory of the season.

“I need a glass of wine, for sure, tonight. For sure,” Kyrgios told the crowd during his on-court interview, after swapping out his rule-conforming white hat and shoes for red versions.

Playing before a nearly full house at Centre Court, the 27-year-old Australian only occasionally displayed his unusual repertoire of trick shots — a between-the-legs swing here, an underarm serve there — or the temper that earned fines of $10,000 for spitting in the direction of a heckling spectator at the end of his first-round match and $4,000 for an audible obscenity during his tempestuous win against No. 4 seed Stefanos Tsitsipas in the third round.

Against Nakashima, an unseeded 20-year-old from California, Kyrgios repeatedly was visited during changeovers by a trainer, who massaged and manipulated his shoulder. There was a stretch where Kyrgios’ high-speed serves dipped from above 135 mph to closer to 110 mph, but he eventually seemed to get past that and was back to producing unreturnable offerings over and over.

After Nakashima evened things by taking the fourth set with a break, then went up 1-0 in the fifth, Kyrgios surged to the finish. He earned five games in a row, before serving it out and closing this way from love-30: cross-court forehand passing winner; hanging in on an 11-stroke exchange until Nakashima missed a backhand; 134 mph service winner; forehand volley winner.

“I’ve played a lot of tennis in the last month and a half. I’m just proud of the way I steadied the ship,” Kyrgios said. “Honestly that’s what I was thinking about: I’ve never lost a five-set match here. … I was like, ‘I’ve been here before. I’ve done it before.’”

This will be Kyrgios’ third appearance in a major quarterfinal. The others came as a teenager at Wimbledon in 2014 — when he surprised then-No. 1 Rafael Nadal along the way — and at the Australian Open in 2015.

“I stepped out here against one of the greatest of all time and beat Nadal,” Kyrgios said. “So these are all things I have in the back of my mind.”

Garin, who is ranked 43rd, reached his first Grand Slam quarterfinal in his 15th major appearance.

The other quarterfinal on their half of the draw will be No. 11 Taylor Fritz against 22-time Grand Slam champion Rafael Nadal or No. 21 Botic van de Zandschulp. Fritz, a 24-year-old American, has yet to drop a set and will be making his major quarterfinal debut after defeating qualifier Jason Kubler 6-3, 6-1, 6-4.

In the first women’s fourth-round match Monday, 17th-seeded Elena Rybakina of Kazakhstan made it to the Wimbledon quarterfinals for the first time with a 7-5, 6-3 victory over Petra Martic. Rybakina leads the tour in aces this season and added six to her total, helping her double up Martic in winners, 26-13.