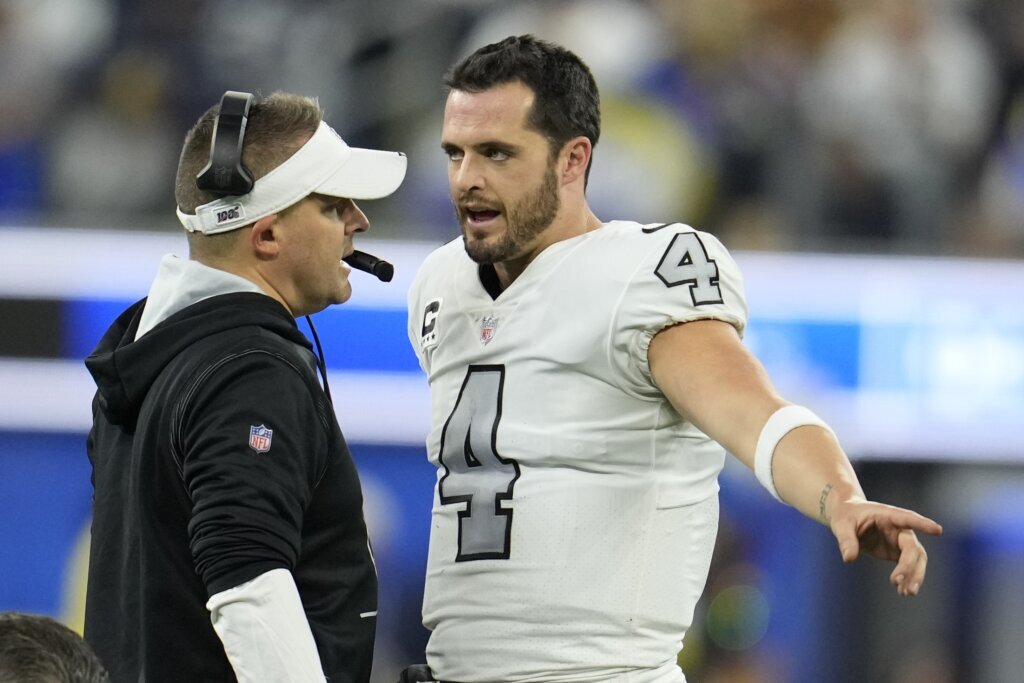 INGLEWOOD, Calif. (AP) — A season of painful defeats for the Las Vegas Raiders just got worse. Last month, they…

INGLEWOOD, Calif. (AP) — A season of painful defeats for the Las Vegas Raiders just got worse.

Last month, they lost to a team whose coach was an ESPN analyst six days earlier. And on Thursday night, they allowed the opposing quarterback to direct two touchdown drives in the final four minutes after being picked up on waivers two days before the game.

Las Vegas’ 17-16 loss to the Los Angeles Rams made the Raiders the first team to blow four double-digit halftime leads in a season, according to SportRadar, whose records go back to 1930. Seven teams had squandered three halftime leads of 10 points or more, most recently the 2020 Los Angeles Chargers.

While Indianapolis’ 25-20 victory on Nov. 13 in Jeff Saturday’s coaching debut was shocking, Baker Mayfield leading an eight play, 98-yard drive, including a 23-yard touchdown pass to Van Jefferson with 10 seconds remaining, was just as stupefying.

According to the Elias Sports Bureau, it was the longest go-ahead TD drive that began in the final two minutes over the last 45 seasons.

“It’s tough. There’s really cool stories and cool moments for some guys. I’m sure Baker will have that moment for the rest of his life,” Raiders quarterback Derek Carr said. “It’s frustrating, but it’s not something that we are talking about like, ‘Hey, this is a big opportunity,’ because of this.”

The Raiders scored on their first three drives and gained 177 yards to take a 13-3 lead before things went south. On its final six possessions, Las Vegas mustered only a field goal, turned the ball over twice and went three-and-out three times.

Las Vegas was driving for a score late in the first half before Carr was picked off by Ernest Jones in the end zone.

“I don’t know if I got tripped, but something happened,” Carr said. “Mack (Hollins) was open in the back of the end zone and I was trying to get him the ball. That’s a tough feeling because we were close to having a touchdown, and everyone’s feeling better about today.”

Carr was 11 of 20 for 137 yards and two interceptions. His 36.9 passer rating was the lowest of his nine-year career.

Davante Adams — who had eight receptions for 177 yards and two touchdowns in a 27-20 win over the Chargers four days earlier — had only three catches for 71 yards against the Rams, with none coming in the second half.

The offense wasn’t the only thing that self-destructed. Clelin Ferrell lined up offside on a Rams punt to give LA a first down and new life. The Rams took advantage as Cam Akers scored a 1-yard touchdown 14 plays later to get them within 16-10.

On the Rams’ game-winning drive, defensive tackle Jerry Tillery was called for unsportsmanlike conduct after Mayfield was sacked at the Los Angeles 13 on first-and-10. On the next play, Mayfield hit Ben Skowronek for a 32-yard gain to reach Raiders territory with under a minute remaining.

“We didn’t finish the game. The bottom line is, until we figure out how to stop losing games with mistakes that we do to ourselves, then it makes it very difficult to win,” coach Josh McDaniels said. “You can’t really win until you stop from losing. Penalties and turnovers contribute to that.”

The Raiders entered with a three-game winning streak, but at 6-8 their chances of making the playoffs aren’t very good even if they win out. After a brief reprieve, the second-guessing of McDaniels is sure to ramp up after another morale-sapping loss.

“This isn’t an offense, defense or special teams thing. It’s a team thing,” McDaniels said. “We can not let our foot off the gas. I’m trying to play the same way we were playing when the game starts. Obviously, I haven’t done a good enough job of being able to get us to do that.”